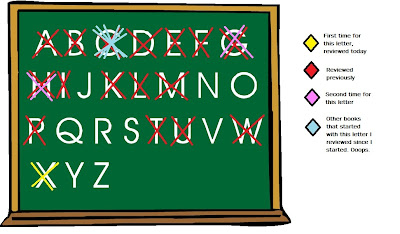 Okay, I essentially suck at this challenge but hey, I got one more letter. Go me. I needed to develop a freaking legend for the chalk board. Yellow - new one, Red - old one, Pink - second go on a letter, Blue - stutter on a letter. I thought I better catch up on what I've been reading because I've been reading things but not saying anything because they were repeat letters, so what the heck.

It's a four day weekend for me thanks to Easter. I'm hoping to do some major spring cleaning on my main floor anyway. Not sure I'll get the upstairs tackled, we'll see how motivated I am. Need to read some too of course. :-) Have a great Friday.

This is a series of short stories or vignettes dealing with King Arthur's court and his knights. In this version they are all into boys and several knights get their romances told in each chapter, although some spill over into two and of course they are all intertwined. In this story, Arthur falls in love with Lancelot who came to deliver a message from the French king. He's oblivious to one of his knights jealousy, and while he is away warding off the Danes, Morgana helps the knight trick Lancelot into betraying Arthur and he leaves crushing Arthur. Now Arthur and his knights are facing an invasion by the French king who is being aided by Morgana and the betrayer. This was cute and sexy with semi-realistic touches, referring to bathing once a month and the use of clothing names that I really didn't understand, but I got the general idea. I just chose to ignore things like a lack of hygiene. LOL Some knights were fey and vain, others more regular guys seeking a companion like themselves, some questing for greatness and sworn to celibacy. If I had a complaint is that the ending is left very open to interpretation at the big battle scene where you know that several knights are killed, and perhaps even Arthur, and yet Merlyn sees them all together later. So I'm not really sure. I found it rather sad ending.

This takes the story from Flint down to Pontiac (up to?). The night he was celebrating his new job with his friends in Flint, Forrest is beaten, raped and nearly killed. However he has recovered, and is working his new job while trying to care for his father who was injured in a car accident, and his teenage brother. He meets new Dr. in town, Patrick, who is interested but Forrest is still freaked from his attack, and can't let anyone touch him. As well he's occupied with his father and dealing with his abusive druggie sister and her friends. Patrick however perseveres, even when he finds out why Forrest isn't interested, or says he's not. To Forrest's surprise, Patrick's touch doesn't seem to freak him out. When his father has a stroke and dies, he has no one to turn to when his sister threatens to have her cronies go after him and his younger brother, so he turns to Patrick who promises him as much time as he needs and a place to stay. It was a nice story although the aftermath of the horrible attack on Forrest is there in all it's glory, some people may find that discomforting, but I think it went a long way to explaining Forrest's issues, including a dysfunctional and abusive family. Maybe he got over it a little quickly, but still, a sweet story in the series that has taken things to a new city but with a common feel. No more nasty Nurse Gladys, whom I was kind of growing attached to. Go figure.

Jordan is a forensic accountant and is assigned a case by his brother. Xavier's business is nearly going under and he suspects his former finance may have been stealing money from the company but he has no proof. He needs Jordan to find the proof and he's on the verge of bankruptcy. Jordan is instantly attracted but since Xavier is obviously straight having been about to marry a woman he doesn't make a move. Xavier however is kind of freaked, not only his business going down the tubes but he's attracted to a man, something he'd firmly slammed in the closet. After working closely with Jordan he can't help but be attracted and when Jordan finally finds the proof, after a little talk with his gay best friend, Xavier agrees to try a relationship with Jordan. Then comes the issues. Xavier is still in the closet and is even freaked out at first that his gay friend knew he was with a guy, even though he'd talked to the friend about Jordan. Duh. It kind of ends with them agreeing to give it a go and Jordan being patient, but I foresee many a rocky moment for them as Xavier deals with being gay, telling his family, business associates, etc. I liked both guys though and Xavier's secretary was great and his friend and his partner were nice supporting characters. You never get to meet the bitch of an ex on-page, you just hear about her after the fact.
Posted by Tam at 8:48 AM

LOL - Xavier's Way has a surge in sales due to this challenge... :)

Have a great mini-break!

I'm sure what that is Chris, but it sounds filthy. Yes, I can imagine that a few books with titles starting with Q and X have increased their sales.

Okay, that does it. I'm recruiting those letters for my titles.

Yep, those are the hot letters I think KZ. Not C, stay away from C. I must have a million books with C. What's up with that?

Your word veri made my laugh.

I'd been considering the knights book but now I'm not so sure. Sad endings and I don't go well together :).

You've only got 8 more books to read and then you'll be done. I've only just read my F book so I'm waaaaaay behind :).

It was sadder than I expected although perhaps realistic given history and the time but it's kind of a mystical open ending however I felt sad for some of the squires who lost their knights/lovers at the end. I think I might have preferred a more unrealistic but traditional HEA for the group.

Lol, that X title is on my list too but I can also pick Xavier's Christmas by Amber Kell if I feel like it.

Someone needs to write a book with Xander. Xavier is getting overused. :-)

The cleaning is sllllooooowwwwww. Sigh. The motivation is rather low.

I enjoyed Stephani's book. I'm going to have to put Xavier on my TBR.

Thanks Eyre. You too.

I've been in deep cleaning all day too! Soooo tired right now. LOL

Think I'll pass on the Knights. I enjoyed High Flow and Xavier's Way was a nice read too.