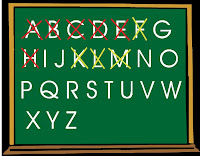 Okay, I'm finding this isn't working quite as well for me as I thought it would. I either get impatient and read ahead because the book I want to read doesn't fit or I don't have the book I need. So I'm going to try not to double dip in the alphabet department but I've given myself license to hop around the alphabet when necessary. Rationalization is us.

When last we left Gaige, Kieran and the Draegans (Do I sound like one of those hosts of the serial TV shows from the 50's?), Keiran had just been captured by Death and Gaige was freaking and doing his best as the remaining leader to move the Draegans and humans to a safe place while trying to get Keiran back. While rescuing Jax, who tried to kill them a bit ago, from the evil sorcerer, Gaige comes into his own powers and with the help of his Grandmother is able to determine Keiran's location and eventually get him back. There is lots of action and intrigue in this, which is book 3 in the series. I've had it forever but didn't read it, I think in part because I knew it's not the end. There will be another book because they still have to defeat the evil sorcerer and Death isn't dead, just slowed down. While there was romance, it's a bit different since much of the book they are apart or only together in a dream world (which doesn't preclude sex lucky for them).  For fans of the series a must read and if you like dragons and fantasy and intrigue and romance, it's an excellent series to pick up. You really need to start at book 1 though to fully enjoy this. I'm looking forward to the big show-down with Gaige's ex-boss, the evil sorcerer.

Ryuichi is a samurai who left his master because he was unworthy, however that's a no-no and now no one will hire him and just as he's about to commit suicide at the foot of Mount Fuji, Kaji a kitsune (fox shifter) speaks to him. He promises Ryuichi a good job with his master if he will marry him. Ryuichi heard that kitsune women were hot so agrees and they marry. However that night he's in for a bit of a surprise. Kaji is a guy. Eeek. However after a minor freak-out he is all about honour and commits to being a good husband. After a few years he has risen to a high rank and he notices one of the other guards flirting when Kaji. When he catches them having sex he finally realizes that he loves him and is devastated. Can they fix it up? This was a very cute story and I'm not sure how to describe it, but it just has a feel of a fairy tale or something about the language usage that gives you a whole other vibe. It's very cool how it didn't feel like contemporary language I guess would be the way to describe it. Hard to say, but I really liked the theme of not just doing  your duty and being a good husband, but giving your heart fully.

This is book 3 in the Coda series. Everything's going along fine when Angelo runs into Jared's ex, Cole, at a party. A bit to Angelo's surprise, Zach gives him the a-okay to get together with him, which causes a huge rift with Jared who doesn't agree. However some time later the 4 guys decide to go to Vegas for the weekend and run into Zach's ex Jonathan (of Strawberries for Dessert) and when Angelo does the whole flirty thing on the dance floor with strangers, both Jonathan and Jared kind of freak and everything blows up with Zach and Angelo having a fight. Can all of them work it out and be friends again? I've had this for a long time and when it came out there was lots of moaning about Angelo being unfaithful and at that time I wasn't sure I wanted to read it. I have to say in the last year however my horizons have expanded amazingly wide (thank you m/m) and the whole concept of an open relationship doesn't phase me now. As long as both are on-side with it, I'm good with it. So I'm glad I finally dug in and read it and it was sexy and angsty and all good things and I'm looking forward to the whole damn gang in Paris next.

Riley of the foul mouth is back. One evening a young man on a motorcycle pulling a trailer crashes into his truck. He rescues Kelly and his huge dog and realizes Kelly is the new downstairs tenant who is usually the resident of his uncle's latest boy toy. He's not thrilled but he likes Kelly and they quickly become friends, although some misunderstanding of who the uncle really is leads to an argument and a kiss which throws Riley off since he finds himself attracted to Kelly. When Riley talks to Jeremy he suggest hitting the gay bar again to decide if he likes guys in general or just Kelly. Although after Kelly picks someone up Riley is pissed, however once he decides to go for Kelly and they have sex, Kelly freaks because his ex was married with a baby on the way and he figures Riley is just walking on the wild side. This is GFY although I'm starting to wonder if Riley just didn't have an Asian gay fetish, but I loved how completely honest he was with Jeremy (to his chagrin) in talking about his attraction and being gay and how it all worked. Rather refreshing and I was just happy to see Riley again because he is so rude and obnoxious and totally likable. You don't need to read the other books in the series, Margarita Mondays (when you meet Riley) or Making Lemonade which is more of a stand-alone, but it helps to put them all in perspective and definitely worth a read. I'm curious to see whose story is next as I understand there is more and I'd love to read more about the "twinkies-three". (Yes, I'm a perv.)
Posted by Tam at 7:29 PM

I just picked up Paris A to Z and will be reading it soonishly. The dynamics should be fun. Heh.

I haven't picked it up yet but I have a couple of letters before I get to P. We'll see if I hold out. :-)

What the hell, have the review for the last one disappeared? Fuck. I hate blogger some days. Must fix.

Paris is on my list. I'm so glad I'm not trying to read in alphabetical order. I'd drive myself crazy!

A Scrabble reading challenge would be kind of fun...

I liked the concept Wren, I'm just not very self-disciplined.

Have to spell words with what you read Chris? I'm sorely lacking vowels today.

Or play a round of Scrabble and read accordingly.

LOL I could never have the patience. Go you!

The only one I've read so far is Fires which I enjoyed. I do have The Letter Z and Mandarin Orange on my reader. Now they just have to fall into my challenge list. lol :)

You know, you have me so confused I have no idea what this challenge was about. Were you supposed to read a specific set of books in alphabetical order by title? By author? Did you pick the books or were they picked for you? If so, by whom?

Here's what I think you should do in the future, Tam: Just say f**k you to the "challenges." That way I can be entertained by your reviews without my brain twirling in my skull, trying to figure out a pattern that doesn't exist! :)

The object was to read the books of my choice in alphabetical order by title. But it could be done by author I suppose. However I was doing great until I hit E and then I just couldn't wait for M and then came L or and wait, I need to read F first. So now I'm just randomly picking letters that I haven't done yet. Sigh. Always the rebel, that's me.

Reading in Alpha order would seriously make me a crazy person. I wouldn't be able to do it either. I like the sound of Sweet & Sour. Riley was such a foul-mouthed guy it would be interesting.

Of course Marie Sexton's book sounds good too. I should probably finish that series one day. :)

Didn't Kaji having sex with someone else make you nuts or is it just me who has infidelity issues? lol

You should definitely finish it Tracy. I read Paris today. Really great.

You see Kaji is a magical creature. Did he have sex with the other guy? Hmmmmmm. :-D

The TC Blue book is definitely going on my to-buy list.
I still have to read book 2 and 3 in the Coda series, I've only read 1 and 4 and really enjoyed them.

I like your little school board and the crossing off of the letters. You gotta admire Lily for doing this challenge the way she did it. I could never do that I think. :)

2 and 3 are Zach and Angelo's story Janna, and 5 is more them as well although all the guys are in it, in that one the others are more settled. I'm not sure which couple are my faves, I do have to say Angelo has a way of worming his way into your psyche. :-)

Mandarin Orange was very cute and I just love Riley.