So we got these new little disposal units for "feminine hygiene products" in the bathrooms at work. So I've noticed the pictoral instructions and it's been bugging me...

First one:  Open the container put in your waste. Got it.

Second one: No using it as a toilet. Well, the opening on the container is probably smaller than a softball and since they are only found in the girls' bathroom where none of the us have a built-in directional urine disposal device, I'm thinking this is pretty unlikely to happen. And it's BESIDE the toilet. It's not like it's in the middle of the parking garage with no facilities in sight.

Third one: No needles. Okay, I'll admit that some days a shot of heroin is nice at work when things get a bit stressed, but I can see the danger to cleaning staff.

Forth one: Ummmm. No using it as a cape for bull fighting? Now doing your hand laundry in it? Don't throw up in it? Don't dispose of picnic blankets in it? What the hell is that little person doing? It's a bit hard to see but the little person is kind of bent over holding a large rectangular white object. I'm dying to know what it means. Or what it could mean in your imagination. (Or I suppose I could phone that 1-800 number and ask, but what fun would that be?)

THAT is my question of the day. 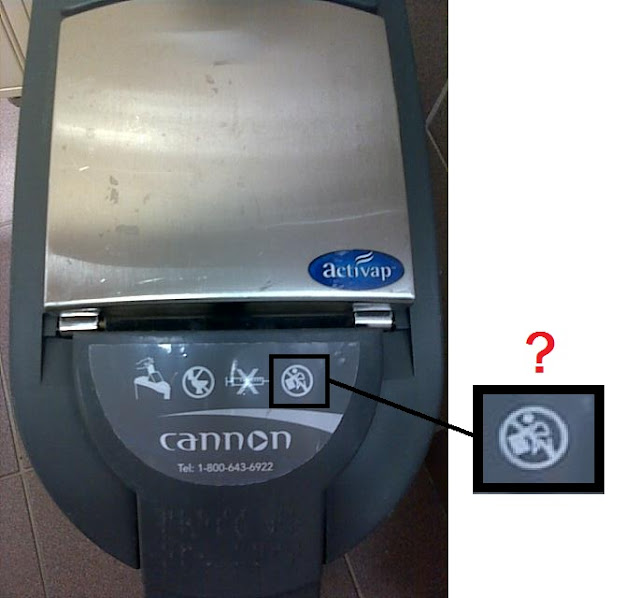 LOL, Tam. You have the strangest ideas for posts :).

I think it's probably meant to mean don't put paper in it - like newspaper or maybe even toilet paper. Perhaps with it being in your offices it could mean not to mistake it for a shredder :).

*scratches head* Could it mean no paper towels? Because we all know much fun it is to wipe with those harsh, public bathroom paper towels. LOL

Ha. Maybe Jen. Not sure the spies would go looking for documents in the sanitary napkin disposal unit. :-)

Perhaps it is a large paper towel Stephani. Still, you'd have to scrunch it up pretty small to fit it in.

I think it seriously means, "No throwing up in it." Why else would someone be kneeling there? Surely not to pray!

I'm with Val - no throwing up in it. OR it could be no pusing it over while throwing up! lol

It's so weird that they are leaning over like that.

Oh, I know what that stands for! "No disposal of motor oil by pygmies." Yup, that's it; I've seen it before. (Psst -- little do the Loo Police know it's aliens who tend to do this, not pygmies.)

Now I'd like to know just how often you whip out your camera in bathrooms. And why.

Could it be a nappy? Sorry, diaper. I'm sure I've seen one over here with that on it. But really, where else are you meant to put the damn things? Who wants to carry baby poo around in their bag all day?

You may be the closest one KZ. :-) Actually I've been looking at it for days and kept thinking "Wish I had my phone with me". So today in anticipation of this post I specifically went into the bathroom to take a picture. Luckily it was empty and I managed to make my escape before anyone wondered what the hell kind of tom-foolery I was up to. :-)

Oh. That's brilliant Jo. Could be. Can't flush them. Hmmm. The little person should be holding a baby though. :-) A screaming baby.

It could be do not take a photo whilst sitting on the toilet, perhaps? Strangely, the next blog I looked at had this & for some strange reason, I immediately thought of you.

OMG, it's got a foot warmer and night light. Want! LOL I'm not quite sure about having it in my living room while my date is over for a visit, but you can program it for each user. Amazing. :-)

Oh and I was standing when I took the picture. LOL

Hmm. Not very effective if no one can figure it out, huh?

Now, I actually DO dispose of needles in the bathroom at work - migraine shots! :) However, they're enclosed in plastic cartridge and the cleaning staff would have to pull the used needle out of the cartridge and intentionally stab themselves, so...

Yes, but then I work for the government Chris. You know us public servants and the crack and heroin. ;-) Not so responsible.

Actually I'm pretty sure you were spot on with the bullfighting thing cos if you look at the first pic from-a-distance-in-a-just-woke-up-and-haven't-had-enough-coffee-way it looks like a bull rider.

Ha! It does Kris. So I must be right then.

Looks like they're saying "don't stick your hand in here" just in case a really curious person would look at the hole and wonder what's in there.

Oh, and your hottie seems to be having problems with his zipper. I volunteer to help him out! ;)

Ah yes, because normal people would try to stick their hand in the trash in a toilet stall Lily. LOL Hence, that could very well be it.

I'm sure a little ... lubrication, will help that zipper work just fine. :-)

Hey, if they have to put a warning not to use a blow dryer in the bathtub and other such nonsense... :D

And I just happen to have a convenient little lube packet in my pocket. ;)

I agree with Lily, it's telling you not to put your hand in there. Like anyone's going to stick their hand in a container of used feminine items *gak!*

I like your bullfighting suggestion. Next time sneak in a red marker and color the square :)

Next time sneak in a red marker and color the square :)

That made me laugh out loud. Maybe I'll try that.

Thanks for the laugh, Tam. I don't know what that last one is, but I have to say that I wish the teens where I work would figure out what those receptacles are for.

Ewwwww. I don't even want to think about that Eyre. LOL