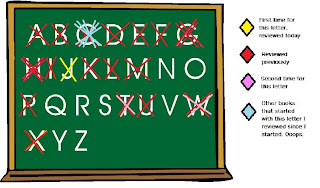 Woohoo. I'm getting there. Yes, I'm still overlapping but only 8 more to go.

Jaynell's father has died and part of his last wishes was that Jaynell attend the wizard college even though at 24 he's older than most students. His first day, he runs into a werewolf, literally. Thomas tells him he's his mate, and even though wizards and wolves don't mix, he's determined they'll work it out. However he is willing to give Jay time to adjust to the concept, and much of the book is Jay getting used to just being on his own finally, dealing with the massive amounts of wizard power he has, and coping with life as an independent man of sorts. When his former tutor kills his house elves and threatens him to gain his power, he fully mates with Thomas to fight back. I noticed someone said this is like gay Harry Potter in university and it is in a way. There is the snotty guy, who thinks he's better, the smart friendly female student, good friends/roommates, the evil professor, house elves (gnomes). Avatars (aka more solid patronuses), but on the whole it's good fun and kind of takes a cheeky look at things with a fair amount of humour. Its the first in a series and I would definitely check out more. It's good when you need a light read with some familiar themes and likable, but stereotypical characters.

Dustin is Forrest's partner and friend. About a year ago or so, Dustin's boyfriend tried to kill him, ending with pushing him through a patio door and leaving him to bleed to death, while stealing his life savings and his mothers and running up credit cards. The guy then vanished. Vaughn, a firefighter sees Dustin at a community clean-up event but Dustin is still freaked by big guys and puts him off, however agrees to go for drinks at the bar later with everyone. Vaughn convinces him to go home but it doesn't quite work out. However when they finally hook up Vaughn convinces Dustin to press charges when the ex is caught and to move his Mom in with them (sep. apartment thank god). These books do have characters who seem to get over being severely scarred psychologically with the help of the right guy just being in their orbit and I though Dustin needed his ass kicked for not going to the cops. He's paying of $10K in credit card debt but doesn't tell the company what happened about identity theft or the cops. Hello, there are ways you don't have to pay that. It was still a sweet story with some funny stories about his work with Forrest.

With My Little Eye by Drew Zachary (71 pages)
Torquere Books

Private Investigator DB is back with Jesse his ghostly side-kick and lover. However Jesse has a habit of bringing home ghost cases which don't pay the rent and it's hard to explain to the police why he knows things. They are also fighting over Jesse wanting to consult someone about why sometimes they can touch during sex and sometimes not. When Jesse comes across the ghost of a young girl who was murdered in such a way it looks accidental, they enlist the help of a medium who can really see ghosts as well, to not only help with the sex problem but to use her as an excuse as to how they know about the crime and protect the little girl's friend who is also in danger. There is lots of fighting and hurt feelings as DB has never said I love you to anyone and he's not about to start now, especially in front of strangers. But more and more often they are able to make Jesse real so they can touch and it's really very sweet when they connect as real people and the wonder Jesse feels at being able to feel and taste DB for real. Of course DB still blows smoke rings just to bug Jesse and they argue over ghost cases, but it was a nice follow-up to Eye Spy. There are a couple of more stories to follow which I'll definitely be looking into.
Posted by Tam at 6:47 PM

Is it my imagination, or does your J book sound like HP fanfic?

LOL Well, the theme is there in a way Chris but with adults and he's not in love with a classmate, although I think it's the first in a series so there are some of his roommates and other weres who will likely hook-up. It was kind of a fun read, not to be taken too seriously.

I've read the Zachary book, and I enjoyed that series. Stephani's is on my list.

I don't know about your J book. The name Jaynell is kind of off-putting. Plus, I'm not much into the wizardy stuff most days. Just call me a muggle.

He mostly refers to himself as Jay, Eyre, so it's not so weird. But yeah, wizards and magic aren't for everyone.

Hmmm, non of these are really calling my name. The Amber Kell does sound like a HP rip off and although I usually like Stephani's books, I get irritated when characters don't report crimes for their own spurious reasons. Why struggle to pay off a debt that's not yours when it's theft? That would weaken the character too much in my eyes.

I didn't really see it until I saw it pointed out on GR Jen, and then I could see all the parallels, but it's a fun light read.

I was a bit annoyed with Dylan, why make your mother and yourself live in poverty when there are laws to protect you? I'm surprised I liked the ghost one so much, but maybe Jesse acts so human it worked because ghosts are usually not my thing.

I have just read a ton of Ms Kell's book - I have that one on my list, good to know I am going to like it...

I am taking a break from Stephani work.... the last book I read by her didn't do it for me...

I think it's one of her better ones EH, so I'm sure you'll enjoy it. Sometimes a break is good and gives your brain a chance to enjoy it more later.

Hahaha Jaynell's Wolf. That book has a really pretty cover, but the the story is hilarious!

Definitely not meant to be taken too seriously. :-)