Well, the big high school musical was pretty good last night. I was really impressed with some of the singing talent and that one kid HAD to have taken ballet at some point because I don't think guys would just pick up that spinning around on one leg thing. LOL
Chris, sent me this link to the GLBT Bookshelf and the free books they are giving away. These range from little shorts to the full-length Deadly Nightshade by Victor J. Banis. So I snapped up the ones I haven't read and gave them a read.

Colin is trying to make it as an artist in Paris when he runs into Thomas, and old "friend". Eventually through Colin's recollections, you find out he was kidnapped at 14 and Thomas rescued him and was his body guard. He always had a crush on Thomas and they spend the afternoon reconnecting. Thomas is only in town one night but they have an amazing time, until morning when Colin discovers that Thomas was really sent my his rich Grandfather with whom he'd had a falling out to check up on him. Needless to say he's hurt and angry. The image painted of the artists district in Paris is amazing, Josh did a great job giving you a real feel for the city which I think was as much a hero of the story as Colin and Thomas. 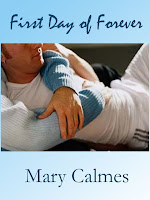 Cam, now a police detective in Chicago and Davis, a lawyer in San Francisco were best friends through high school and beyond. Although Cam wanted to hook up with Davis when they were 18 Davis refused because he didn't want to ruin their friendship. He phones in a panic because he wants Cam to come to SF for the party to celebrate him making partner. He's acting strangely and finally tells Cam he was stupid and loves him and wants them to be together now. It's all told from Cam's 1st person POV and while he tries to slow down Davis (who is all hands and "fuck me now") to find out what brought on a 12 year change of heart he didn't try very hard. After all that time I'd be going "WTF?" not "yeehaw let's get naked". I sometimes find it hard to relate to characters who act very differently than I would in situations, in love or not.

Frank and Brad are living the perfect life now that Brad has recovered from his motorcycle accident, new house, nice furniture, life is great until Frank gets a letter from his parents saying they're coming to visit. He totally freaks but won't tell Brad exactly why, just rants and raves about how awful it will be but Brad tries to be positive, after all they accepted that they are together so it can't be that bad. In the lead up Frank gets more and more freaked out and when his parents arrive .... well, lets just say his nerves were justified. It's a classic tale of the in-laws from hell told from Brad's perspective. It's actually a humerous story, it's not that they are evil, but are the quintessential crazy in-law stereotype. So it was pretty funny to read the guys' reactions to the guests from hell.
Posted by Tam at 6:00 AM

I haven't been to the GLBT Bookshelf in a while. I'll have to go check it out. Thanks!

Free is always good Lily. :-) I've been there a couple of times but never made it a habit.

He is a cutie.

These all sound interesting! I should go have a look. And the hottie is definitely a cutie!

All three were very different feels, from more serious, to typical contemporary to humorous. And yeah, you can't go wrong with free Val.

Glad you enjoyed your visit to the Bookshelf. ;)

Having a flashback to the in-laws story. They were horrible!! And I agree about First Day of Forever - things got resolved awfully fast for the situation.

I would have liked if in second one they had taken the time to really talk about why he changed his mind and what it meant instead of just kind of glossing over it during foreplay, but again, part of that is my personality reflecting on the characters probably.

And yeah, they were pretty nasty in-laws, not in a "seriously try to kill you" way, but just in the "you're never staying at my house again ... EVER!" way. LOL

I think it's why some of us more common sensical folks get frustrated with dumb people in books and if you don't "like" the character or find some little part of them that you can appreciate or relate to, it's hard to enjoy the book as a whole. Not impossible but harder, for me anyway.

Is it just me that the link isn't working for? When I click on the free reads I get a story about the six pound horse. Not that the horse isn't adorable but I think I'm more interested in the free reads! lol

Never mind I found the link at Chris's! :)

HAHAHA Oh my god. I must have put the link of the horse I had for my daughter. Okay, I'll fix that. Are you SURE you don't want a six pound horse?

Thanks for the info - I go over to the GLBT site a lot - but I just check on whatIi want and leave...

I really need to investigate that place more..

I've never really gone there EH. I should probably bob around there a bit too