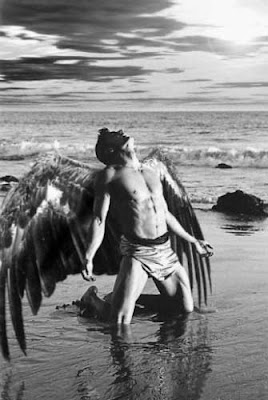 I suppose technically this is Part 3, but only the second time I formally did Angelic Friday.

Ascension - Sabrael has been tasked for centuries to watch over a family. He goes down to check on Adam, the last remaining member to find him packing up the family business. Although Adam shouldn't be able to see him he can and they go out for coffee, after some kissing they go out for dinner and end up at Adam's place. This is done mostly from Sabrael's perspective and it kind of has a dreamy feeling, because Sabrael isn't sure why he was sent to Adam, he hasn't had these human feelings before so you kind of feel is awkwardness and sense of being unsure about his place.

Sariel *- Jake works for a museum and is invited to his boss' villa in Italy. When he arrives it seems his boss is some kind of psycho serial killer who plans on raping and murdering him. Jake has a choice, choose silence and be left to the monster or beg them to rape and kill him themselves. He chooses the "monster" and through his kindness the monster is revealed to be a banished angel. Okay, this was like a Biblical history lesson, I'm not religious, I don't have a clue about this stuff and while it was complicated I was able to follow it. Although this angel seemed capable of spontaneously creating the self-lubing ass in his partner. Ack. He must have been Japanese. It was definitely different from the others, almost more horror at first or X-Files meets the Vatican.

The Platypus Learns Astrophysics - Jonas is a crabby CEO with an Alzheimer's afflicted mother. Suddenly angel Micah shows up in his office to make his life "better". He just has to touch him and Jonas will be happy. When it doesn't work Micah is stuck on earth until he finds out why it didn't work. While Jonas is pissed he's stuck with a gorgeous guy (with Ken doll genitals) he starts to get used to having Micah around when suddenly the Boss shows up pissed at Micah's actions. I really enjoyed this one and spent most of the story smiling. Jonas is a total PITA, he's surly and annoying and most of the time Micah is able to stand up to him and put him in his place. There is also a sad moment as Jonas deals with his Mom. On the whole this is one of my favourites so far in the anthology but I love me a surly snarky hero.

* Need some help because this is making me nuts. This story talks about the Nephilim, the children of angels and humans. There was a story I either read or heard about where someone had to protect a man who was descended from the Nephilim. Anyone have any freaking clue what I'm talking about? I remember because I'd never heard of them before that story and poof, here they are again.

Hope everyone has a great weekend. I am going to my daughter's high school musical (nothing like the movie) tonight. She and 5 of her friends did all the sets. Oh yeah, my ex is going as well. Sigh. But it's nice she invited us. Oh happy birthday to my Mom today. Have a good one. 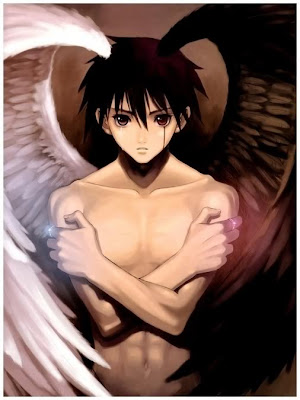 Happy birthday to your mom! And have fun tonight. :)

I really liked "The Platypus Learns Astrophysics", too. No clue about the Nephilim - I've read about them before, but can't remember where. I did have a yaoi flash whilst reading it. Heh.

I can't help with the nephilim thing either. And the self lubing thing, like Chris I had a yaoi flashback :).

I did like the platypus story though. Good balance of witty dialogue and pathos, I thought.

Okay, we seem to be of the commmon yaoi mind-set with the self-lube. LOL Although what's scary in yaoi is that it doesn't even have a paranormal excuse.

Platypus seems to be well liked by many. I agree with you Jen, it wasn't all laughs, but it was a nice balance with his Mom and him changing combined with the humour.

Hmmm. I wonder if I do a "search" I can find books in my files that have the word Nephilim in it because it's still bugging me.

Whoa, thanks, guys! :-) Love to hear you like the story.
As a thanks, I found something about Nephilim:
http://en.wikipedia.org/wiki/Nephilim

Re. nephilim: Here's what I understand, based on the research I did for my Ellora's Cave book Cemetery Dancer.

They're mentioned in the Book of Enoch (biblical apocrypha). The nephilim were angels sent to earth, eons ago, to instruct humans in the ways of righteousness -- sort of like divine missionaries. But they became corrupted by lusting after mortal women. Now they’re considered sort of quasidemonic, since they’ve pretty much given in to their sexual appetites to the exclusion of doing good.

You did a super job Matthew. We'll now be waiting (not so) patiently for your next work. (Ahhh, the pressure is on. LOL)

Thanks KZ and Matthew. Hmmm. I'm going to try and search my books at home by word and see if I can find the story. I was SURE I read one (or about it) where the one guy was the last Nephilim descendent and someone was trying to kill him but the other hero was protecting him. Or did the killer fall in love? Damn. This is one of those things that makes you berserk until you find it. LOL

KZ, in the Mary Calmes story the angel was a banished nephilim I guess but he didn't lust after the ladies.

I'm not excited about short stories about angels, Tam, but I once again bow down before your awesome picture-finding gifts!

Thank you Wren. I thought my top angel was kind of apropos with the fallen angel stories. He looks a tad upset to be stuck down here with us mortals. Can't you just hear him screaming "Noooooo!"

Well, yeah, I can hear that.

I can also hear: I'm here! Somebody ravage me!

I think I've read something that sounds like what you're thinking. Maybe Kiernan Kelly's Archangels Unleashed. Not sure.

Ah ha! I knew it. Okay it was in the Archangels Uleashed Taste Test by Kiernan Kelly. Whew. The second story is about a descendent of Michael's nephilim and Raphael the healer has to save him from Lucifer who would love a smidge of angel blood. Only love can save him and guess who he falls in love with?

It's a great little set of stories, each about a different angel and follows on the Dancing on the Head of a Pin book. Lots of typical humour for Kiernan. Whew, I can rest easily now. :-D

That works too Wren.

Oooooh. Lily and I are sharing a psychic link. :-) It was that book.

"...in the Mary Calmes story the angel was a banished nephilim I guess but he didn't lust after the ladies."

Of course not. Because then the story wouldn't have been appropriate for a DSP antho. ;-) But hey, lust is lust. No reason there can't be gay nephilim, too!

I'm sure 10% of them were gay KZ. LOL Statistics never lie. They just wouldn't get caught, no offspring.

Hey, how come angels are always guys? So far they have all been guys in the antho. Now if the angel is part of the couple, yeah, but not all the stories have the angel has a romantic lead, sometimes he is a "helper". Hmmm. Now I'm taking offence. I'm angelic. Right KZ? You know how pure and virtuous I am. *flutters eye lashes*

"So far they have all been guys in the antho."

Tam...DREAMSPINNER PRESS. Nobody there is going to give a juicy angel role to a chick. And quit fluttering your eyelashes, or Castanet will descend on you and pluck them out. That's one of her pet peeves.

Fine. Okay. Not this time but ever? Tell me, can you think of ONE angel (except that Roma Downey chick from that TV show) who was a woman? We're under-represented I tell yah.

No more fluttering, I swear. Call her off!

Thanks Matthew. All ladies that could easily kick ass. :-)