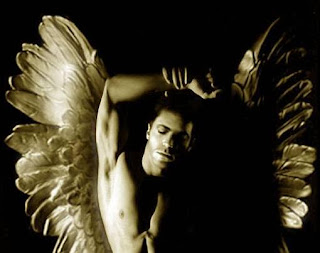 Because of the special blog hopping go-round thingy, and my turn on Friday, I'm posting my angel report on Thursday instead. Come back tomorrow to check on my special project. And hey, my Monday post was posted on Sunday, so why not the Friday post on Thursday? I like to stick with a theme.

Three stories each with a distinctly different theme this week.

The Angel Blues - Morgan is a stressed out cop who one night after a rough day suddenly finds a young man sitting on his window sill listening to blues with him. He's freaked out and paranoid but when Spencer keeps showing up in unexpected places and kind of disappearing he figures he's going nuts and doesn't believe Spencer's tales of being an angel but he keeps talking to him anyway. During a bust gone bad, Spencer breaks the rules and saves Morgan getting trouble, Morgan then realizes how hooked he is on Spencer. This was a great story with lots of slightly sarcastic exchanges between Spencer and Morgan, their banter was very appealing and you can see the positive effect Spencer has on Morgan and their connection beyond the physical. I quite enjoyed this one.

Redemption - Ziba works ... somewhere people go after they die. He's called a sponsor, he takes the newly dead and helps them work off their sins and earn redemption. He's looking for new recruits and finds Abdiel who has been cast there with no possibility of redepemption. He takes him on anyway, even though there is no way out. They get closer and share their stories of how they both became outcasts. It was quite a different story and is a bit complicated to describe, especially at the end, but still, really well written and a nice change from an angel interacting with a human as it's all set in the ... otherworld? I don't know the word. Pergatory? Non-religious person here, that's my excuse.

Herbal Tea - Douglas works for ... the FBI? Men in Black? Something like that, and he's sent to a herbalist shop to recruit the herbalist for ... something. So they get to talking and the herb guy is flirting his head off and makes a special tea for Douglas who's a curmudgeon but completely fascinated by the younger man. They basically chat about this and that and Gordon helps defend Justin's friend against an abusive ex and then he prepares to leave (after some smexin). (I'm still waiting to find the angel connection, the FBI connection, the recruitment connection.) On the street he sees Justin attacked by gay bashers and it seems Douglas is really an angel and he's not supposed to help but he tries to save him (he knew he was going to die) and then the psycho ex shows up with a gun and shoots them and then they are angels? And Justin was an angel? And now their partners (in a work way anyway), maybe? Waaaahhh. I was totally confused. It was all a bit hippy dippy for me but I enjoyed the part until he left the store, then I was totally lost. Oh well. I'm sure that kind of vague ending works for people and maybe I'm just slow.

So three quite different stories this time around from the usual human/angel pairing. Only 3 more to go and this spreading it out works. Gives me a break and the themes seem fresher a few days later. 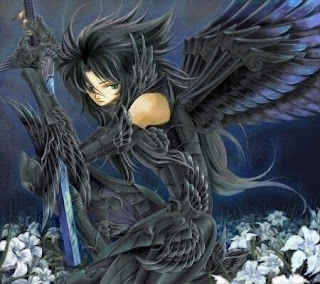 Yay, the mind meld still works! The first two were in my top favourites from this anthology. My view was that Ziba was in hell - but it could have been purgatory.

I was as confused by the Brues story as you was by the end. I sort of got the whole 'he's an angel' thing but never really understood quite why he was there on the first place and what his mission was. Did the mission go wrong or was that always the intended outcome? *shrugs*

I shall look forward to the final installment.

Ok, I need to read a few more stories from that anthology! I've been reading Curious?, which works a lot better as a straight through read.

I love that last angel picture!

Jen: Yeah, I was totally confused because I thought he wanted Justin's help and yet at the end it's insinuated that he knew he was going to die. Huh. Oh well. Great minds think alike.

For dummies like me these authors have to put clear description of things religious people probably get right off the bat. LOL

Chris: I definitely want to get Curious. Thanks to some lovely folk (thows kisses to Jen and Kris) I have some book money to spend. Will have to see when Curious hits ARe.

Polt: LOL No angel post everyday but there is one more to go. Next week will be the last three stories, then I might have to just post plain old man candy, not that I know you'll complain. ;-)

I haven't read the stories and I'm confused with the third one too. :)

Thanks Lily. Well, I didn't really work that hard to figure it out and explain it, I think when you are left scratching your head and don't feel that invested in the story, you just kind of move on.

Now they are there Eyre. LOL I'll delete a couple. Isn't a demons just a naughty angel though? :-D Ah, we all have things that work or don't. For me it's mages. LOL I know, magicians. Not always of course, there are no absolutes, but often.

I don't know what it is. I know it doesn't make sense to enjoy demons and not angels, but like you said, there are no absolutes.