Sunday my daughter and I went to Montreal to see the Cirque du Soleil show Totem. I am a Cirque fan and should probably make it my goal to see all of their shows around the world. :-) That would be a fun challenge.

I love seeing the shows in Montreal (or traveling shows in general) because you get the tent experience. And in Montreal it's down in the Old Port and out on one of the quays so is very cool to be right on the St. Laurence river. Plus that part of Montreal is beautiful. And packed. Ack. Traffic was insane but we finally found a parking lot that had tons of space only about 5 blocks down on the water.

Even though most circus tents are hotter than hell, the Cirque tents are air conditioned (we were actually cold). It was a gorgeous day. In the 80's, hundreds and hundreds of people out walking and looking at the little shops selling stuff, eating ice-cream, renting bikes. It was fun to people watch. Because my daughter had a riding less on the morning we didn't have that much time to hang around before the show but we've been to Montreal many times so it's not that big of a deal. It's only 2 hours from home so we can go any time.

The show? Amazing. I think better than the last one I saw, which I can't remember which one it was. LOL But I was really impressed. I thought I got second price level seats (still over $100 each - and worth every stinking penny) but we were in row 2. We were less than 6 feet from the stage. You could see the performers eye color when they came to the edge (which they do often). We were kind of off to the side so they probably were second level pricing but wow, it was great. I'm just going to give you the trailer here which covers most of the acts. There were way more shirtless boys. Rowr. And because these guys are athletes really of the highest form, the muscles. Well, good think it was air conditioned. :-) The strength and agility and their ability to make it look so damn easy just dazzles me. The one woman on the rings in pink had better abs than most of the guys on the covers of m/m books. Kristen and I just looked at each other like "Wow". LOL

It's hard to say which was my favourite. The guys on the high bars in the beginning were amazing, the guys and the girl on the ring, the roller skating Native Americans (I was sure her head was going to smack on the stage or they'd go shooting right off the drum), the Aboriginal hoop dancer was amazing, I've seen my share of hoop dancers but he took it to a whole new level. The Chinese girls catching metal bowls on their heads WHILE riding a unicycle were great, the clowns, the guys on the bendy boards and on the tall pole, all amazing. As I said, it's one of the better shows I've seen in a while.

All Cirque shows tell a story, a story that helps if you are on acid to understand. LOL This was the tale of mankind and I think I kind of got it. It starts out with lizard people (and a human disco ball who descends from the ceiling), then there is the Aboriginals, cave men, apes, modern day and even covers aliens from the future. So it's a broad vague story that you see, but you just kind of go with the flow and don't try to think too linearly or have it make total sense.

The only thing we bought was a water bottle. You can't buy just a bottle of water cause they are all about recycling but you get a metal insulated water bottle with water in it for $5.50. Expensive as hell but I was thirsty. LOL After the show about 7:30 we were starved so we went across the street to a pedestrian mall area with tons of restaurants and the buskers were out in full force. From our window in one of the pubs we saw this guy. He must have had 200 people standing around watching him. He was juggling fire and knives on the top of a ladder ... in a kilt. :-) 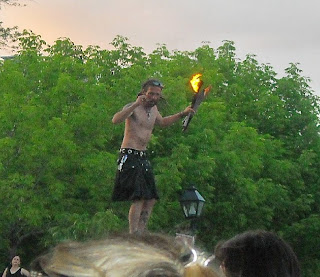 So after we ate, we fought the traffic to get out and got home around 11:00. A great time we had, with a super show and if any of you ever get the chance to see a show you really should at least once. I see Totem is going to Amsterdam but you can check out their website to see where all their shows are.

Have to run to my daughter's riding show. May post a couple of Montreal pics later. Have a great day everyone.
Posted by Tam at 11:08 AM

It sounds like a great escapade for both of you! Thanks for sharing! I've never seen a Cirque production. Will have to look them up - maybe there's one in my future.

Loved your narrative, Tam! Gosh, that sounds like one hell of a nice outing -- Cirque, Montreal, the river, the food...

When you started describing the show, I started hearing "Whiter Shade of Pale." Lizard people. A human disco ball. (And I'm sure the performers all tripped the light fandango and turned cartwheels 'cross the floor. That's kind of a given.)

Chris and Wren: If you get the chance you really should try and see it once. The costumes, the sets, everything is amazing and even the cheapest of the cheap seats is amazing. The tent is relatively small so everyone has a great view.

They were dancing and doing cartwheels at the end KZ. They are amazing atheletes. I don't have any pictures of the show as they don't allow photography but I'll try and find some on-line. I think is Cirque is where gymnasts go when their competitive careers are over. I'm sure the two hotties were gymnasts in another life along with some of the lizard people.

It was a good day. Now I just have to do a ton of laundry now that I'm home. Ugh. Why doesn't the laundry fairy visit me?

Good to see you and your daughter had such a good time! The CdS sounds great. I've never been to one of their shows, but who knows what will happen in the future. :)

I see Allegria is going to be in Minneapolis in late June Chris. :-D It's a good show too, they all are.

You should go and see Totem this fall in Amsterdam Janna. I think it said October it will be there. A fun outing with your husband. :-) (I should be getting a commission or something all the pimping I do for them. LOL)

That's a great idea! Thanks for looking that up for me, Tam! :)

Oh I love Cirque du Soleil as well. I love seeing their shows in Vegas but haven't seen one anywhere else. The tent show would have been amazing! Thanks for sharing the details. :)

Hope you decide to check it out Janna.

They are amazing Tracy, the costumes, everything is just made to dazzle. In the tent you are so close. When the smexy boys on rings were swinging over the audience if you'd stood up on our seats and reached up we probably could have touched them, they are that close. Expensive but you get your money's worth.

I love this circus - I also remember thinking it was really cold inside those tent - compared to other circus shows that I had been to..

Unfortunate my kids hate anything that have dirt and animals - so they dont like the circus - but I love it..

What a fun day for you and the kidlet..

I'm so glad you had fun! I've been once and would love to go again. I don't enjoy circuses with animals, but I really enjoyed Cirque.

No animals and dirt in this one EH. It's very high end, people sitting and sipping wine while they watch. At $100 a seat it better be fancy schmancy. :-) No expense is spared though which is why it's so great.

I don't mind traditional cirucuses Eyre except in summer they are too hot in the tents and just not the greatest quality up here. Same old stuff. I would have loved to see an old-time circus like in the movies from the 20's and 30's. Probably not that great either but there is a mystique about them.

Hey! LOVE Cirque du Soleil! My daughter and I just saw OVO in NY on Friday. That show was amazing too. Can't wait to check out Totem. My goal for the summer is to get to Vegas to see O and Ka (if I stop buying so many books, maybe I can really do it ;) ) Glad you enjoyed and nice to see another Cirque fan :)

Glad to hear Ovo was good Mariana. I saw it's going to be in Boston this summer and we are maybe going to be in Boston. Might be worth it to stop just for the show. :-) I would love to see the Vegas shows. I sometimes kick myself that I didn't go to the one in Orlando a few years ago. And yeah, my book buying obsession kind of cuts into following Cirque around the world. :-)

No matter how I tell them and even U-tube the silly thing to show them that it's really fun, My kids have a one track mind..

Wow, sounds like you guys had a fabulous time. I've never seen a Cirque show. Maybe one day. :)

Hopefully you'll get the chance Lily. Maybe when the grandkids are a little older and can really appreciate it, I'm sure little kids are dazzled but even at half price for kids I wouldn't take a little kid. You can hit the one in Orlando. :-)