I think I have a thing for firemen. Not that this is really news but more than some other careers. I forgot to add the book Hearts Afire - November yesterday but I thought I'd do a special firemen post with some hot firemen. 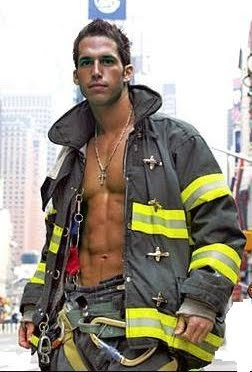 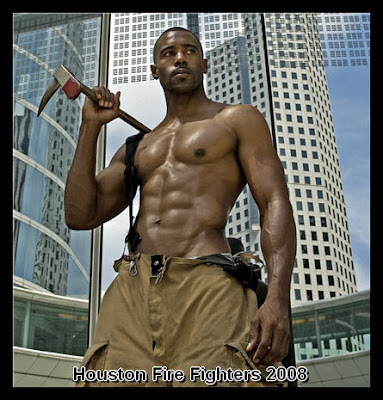 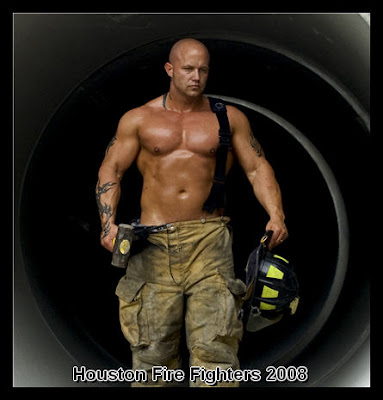 Soon as I saw this I had to have it, hence my realization that I may be slightly fixated on firemen. Not that that's a bad thing. These always consist of two stories.

To Heaven Resembled by Pepper Espinoza - Lance is a fireman walking down the street when a young street musician says thank you. Jakob's dad was a fire fighter who was killed when he was 13 and he always says thanks to firemen. They have coffee and Lance even agrees to come to the poetry reading that Friday where Jakob will be reading his poetry. A pretty funny scene ensues as Lance has his first experience with slam poetry. They end up back at Jakob's and he freaks because he doesn't think he can be with a fireman, he can't deal. Lance is determined and says they'll just be friends. One of Lance's coworkers and old friend is injured in the line of duty and Jakob is even more sure he can't cope. Lance's ex and coworker makes a move but Lance can' get past Jakob. He saves Jakob from some gay bashers and decides to quit his job and be an EMT if it will help Jakob accept a relationship. I liked Lance a lot he was persistent without being pushy and some of it was quite funny. My only thought was Jakob can't hold a job because of his anxiety and Lance is all "oh that's fine, I love you how you are" and I thought, yeah, that will last about 6 months until Lance gets fed up with Jakob not contributing. LOL But hey, maybe he's not a bitch like I am. Ahem. But I liked the story even if the trope of not being able to handle a spouse in a dangerous job is overdone in fireman stories. I liked it.

The Arsonist's Apprentice by India Harper - Josh is a fireman who's working investigating fires. An insurance agent shows up at the scene and Josh is attracted but his older boss freaks. Seems Dylan was a well known arsonist who did 10 years in prison and is now working for an insurance agent investigating fires. Josh is repelled but attracted as he knows his family (also fire fighters) would freak if they knew he was seeing a former arsonist, but perhaps that's part of the appeal. (They freaked he's gay as well.) Josh's ex and friend Ben practically throws him in Dylan's arms at the bar and they have an amazing night. It seems that there are some fires that Josh's group didn't recognize as arson and they start working with Dylan to solve the mystery. He tries to resist but they have amazing chemistry. Some evidence comes to light that ties Josh to the arsons and he has to clear his name and make things right with Dylan. I thought the bad guy was kind of out there but I liked the relationship between Dylan and Josh. Dylan understood how Josh felt about fire and the lure of it from either side. There was some very smokin' smexin' even at a fire scene. So the mystery part didn't work that well for me, but Josh being attracted to someone he should have been repulsed by (a firebug felon) and Dylan's total acceptance of what he did, no excuses, was well done.

So in general I liked both of these stories. If you like fire fighters no matter the theme you'll likely enjoy these as well.
Posted by Tam at 10:04 AM

Heh, I have this in my TBR, too. Sounds good!

Just finished Promises and JackMagic - both quite good. :)

"I thought, yeah, that will last about 6 months" yes, I'm with you. We have to be realistic here, ha, ha!

And I love this part: " he knows his family (also fire fighters) would freak if they knew he was seeing a former arsonist!

I mean, we readers see a lot of Romeo and Juliet type plots in m/m fiction where one guy's family doesn't approve of the other guy, but I've never seen the firefighters versus the arsonists before!

Thanks for the yummy pics!

Both stories sound good (though I think I'd have similar thoughts about how long the relationship would last in the first).

Chris: I have promises but I haven't started it yet. I've heard good things.

Lily: It was pretty good. I enjoyed it anyway.

Val: Yeah, the one thing was Lance asked if Jakob had sought treatment for his anxiety and he said no and he asked if he'd be willing and he said yes, so I suppose I could see things improving, but hey, it's fantasy so I'll let it go this time. ;-)

It was different with the arsonist, although Josh's family were totally unsupportive of him being gay which is why he moved to another city and he even admitted part of his attraction to Dylan was kind of a giant FU to his family, so it was an interesting acknowledgement.

Richelle: Kind of like the former rent boy stories. I see it being thrown up in their face every argument but I guess the romantic in me still hopes that true love conquers all. :-)

I happened to catch NYC firefighters on the Today Show yesterday. They have a calendar. CityoftheBrave.com will take you to the publisher's site, where you can ogle a few of the pics. A google search for City of the Brave brings up a vast array of NYC firefighters... I think these are some of the sexiet fireguys I've seen.

Ohh, thanks Wren. I'll definitely check it out.

And there was that super sexy Toronto firefighters calendar for this year - I remember watching a video about it being put together....

Firefighters! nom nom nom
I better stop visiting your place... this is another one I'll be adding to my tbb list... you're so bad for my bank account :)

LOL! Don't apologize, Tam :) After all it's me who clicks the 'buy now' button over and over ;)

You should do a survey, Tam: 'who would you pick a firefighter or cop?' Any money the firefighters will win. There's just something about those boys. Merow.

Hmmm. I'll have to figure out how to do a survey widget. I think you're right.

"Got a hose in your pocket, or are ya just glad to see me?"

I think that man in the upper left is dressed to ignite rather than extinguish. Oooooo.

The opportunity for bad fireman pick-up lines is immense KZ. :-)