I haven't been reading all that much because I'm glued to the TV pretty much 24/7 but I can read and watch and tune out the blah blah blah of the commentators. We got our first medal. A silver. Grrr. *squinty eyed glare at Americans* It was down to the last skier which I suppose is good. Maybe today? The weather is sucking so bad there. Oh well.

This is the follow-up story to Bottled Up, it's Bobby's story. Bobby is now in his final year of art school and is heading home for spring break. His Dads are going on a cruise and want Bobby and Kenny his "brother" to watch the store. Okay, first I was confused as hell because Bobby never had a brother, but then it goes into flashback to explain that Sam's partner was killed and they took in his son Kenny who was also Bobby's best friend. Seems Bobby's been in love with Kenny forever but after being rebuffed their first Christmas home they've grown apart. Sam and Sean hope the time together with help them grow closer. Oh yeah, that works. LOL There is also a subplot of missing wine that the boys are determined to solve. I wasn't as enamoured with the real father subplot, but I just let it go. I think they are typical young men who don't talk about their feelings, angst over how it's all going to work (harder when you also have the same parents in effect) but it's pretty steamy once they get going. I thought the distance issue was a non-starter. They were going to school less than 3 hours apart. Whooppee. So see each other every weekend. Also one of the first times they make love Kenny pulls out a mink glove for smexin'. Who the hell takes that home for spring break when you don't plan on getting lucky? LOL So on the whole I enjoyed it, the characters are appealing and had fewer issues than the first one I read. 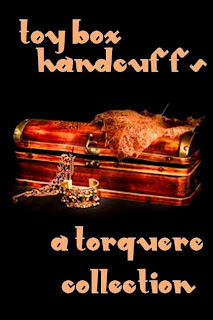 I bought this because it had a Brandon and Nicky story it in. *shrug* What can I say, Nicky is my ungh guy and it was on sale.

Ratchet by Jodi Payne and Chris Owen - This is a story of Noah and Tobias from the Deviations series which I haven't read. You don't really need to but it would likely have had more significance. Tobias goes to Noah's apartment waiting for him. Tobias is Noah's dom, Noah is a cop. They play some word games and Noah ends ups handcuffing them together and there is hot smexin'. If this series was like these guys I might be interested. There was lots of teasing and playing and it wasn't the serious Dom thing, plus Noah obviously had a job. It was okay.

Technique by James Buchanan - Brandon goes to visit Nick for the weekend in Vegas. As Nick is cleaning up to babysit his friends kids Brandon finds his handcuffs. He starts telling him they are crap not like his official ones. Nick starts asking for a lesson on how to use them and then quickly has Brandon cuffed up against the wall for some smexy fun. I love these guys and seeing Nick go all dom and Brandon all mushy is great. Brandon has some interesting ideas to keep the kids busy including both sets of cuffs and a night stick. LOL

The Dare by Lorne Rodman - This is obviously and established group but I'm not sure from where. It's m/m/m, with Cody daring Farley to go to a sex shop and buy something. He totally freaks out and ends up buying handcuffs. When they get back to the hotel (oh, these are rodeo cowboys), they wake Chris and while Farley wanted to toss the cuffs he gets convinced to handcuff Cody to the table (I couldn't quite figure out why he couldn't get away, lift the leg, drag it across the room?) and make him watch Farley and Chris get funky. Cody is really pissed and punches Chris who seems to be his brother. They all make up in the usual fashion. While I didn't know the first characters I didn't feel lost but this one I definitely did. Especially with the brother thing thrown out about 3/4 of the way through and I felt I was missing something while reading.

Dirk designs and sews outfits for ... I'm not sure. Kind of a specialty stores, corsets and kilts for guys, tight leather and pvc stuff, sexy but not sex stuff. Anyway, his boss is getting ready to make their new catalogue and is basically forcing Dirk to be one of the models. His boyfriend Kit who models for free promises to help him through it. Half-way through Dirk is totally losing it so Kit ducks under the kilt to relax him. The shoot goes great and company flourishes. I'm kind of ambivalent. For one I detest people who push around their employees and force them to do things they don't want to do. Who just bully over them and don't give a damn about how they are feeling like Dirk's boss. Kit is the kind who wears make-up and nail polish and he was understanding and knew Dirk had no choice (which I didn't quite get - tell her to fire you and as her main designer that ain't gonna happen). It was interesting to hear the descriptions of the dresses and outfits and Dirk wearing a corset which really isn't my thing. Some pictures would have been helpful as I didn't know what some of the clothes were and I didn't feel like googling. It was okay, quite different I guess with the clothing emphasis.
Posted by Tam at 3:27 PM

Yeah, there were a few points in Uncorked where I was "huh? so what?! why is that a problem? you dorks". I picked up that toy box for the same reason and it sounds like the Nicky & Brandon stories going to be the only one that I really bother with. Stay Tape sounds like one I'll pass on, unless I read every other short m/m work I have and am twitchy desperate... which could probably happen. :)

Did you pick up the Petit Morts yet? Liked.

Yeah, sometimes you just have to let things go or you'd go crazy.

I haven't bought them yet but I will.

Stay Tape sounds like one I'll pass on, unless I read every other short m/m work I have and am twitchy desperate... which could probably happen. :)

Knowing you that is quite possible. LOL

I enjoyed Uncorked more than Bottled Up. In Bottled Up, Bobby just didn't sound his age, but in Uncorked, the Bobby in the flashback scenes sounded much more age-appropriate.

Aw, now, Tam, don't be a hater! Silver is almost as good as the gold we Americans won. ;)

I agree with you and he definitely seemed like a 21 year old guy in this one. I did enjoy it.

Yeah, silver is better than bronze. Sigh. Men's moguls today baby. It's ours. :-)

Sorry, Tam, but I think your Hottie of the Day looks pretty dorky -- not your type at all.

I think Apolo Ohno is much cuter, but Sven is okay. :)

It was a shitty picture but best I could find. To be honest I wasn't looking at his face all that closely. You could see the abs under the jacket he had on. He is kind o on the dorky/cute side, but from the neck down - niiiiice.

I'm looking or a pic of the Canadian guy who came 6th in biathalon today. (Best Cdn result ever.) He was sooooo my type. *pant*

Jean-Philippe Le Guellec is a hottie! I can see why you're panting over him.

Yahoo had an "article" about the hottest 25 olympians. The women were all in their underwear, etc, posed provocatively. The men - meh. What's up with that, I ask you?

Try this Wren, Homorazzi has a countdown of Olympic hotties. Some better than others but JP is there.

It is unfair that usually pics of women are all sexy, especially in the NA media, less so in Europe, think of all those calendars of sexy athletes. Not in North American in general.

I've got Bottled Up and Uncorked in my TBR but haven't read them yet.

Toybox: Handcuffs was nice. I've read all of the prior books that these stories go with. The Deviations series is really good. I especially like the growth of Tobias and Noah's relationship although I wasn't thrilled when the added a 3rd. Book 5 is coming out hopefully this year.

The Dare is a follow up to Bullriders. Bullriding brothers who also love to ride each other and the cute guy they both fall for.

It wasn't really clear in the book where the third group came from Lily although it was clear they were from another story. I keep hearing about Deviations. Maybe someday I'll suck it up and try it

Hi Tam! I just saw that Canada got its GOLD in the men's moguls. Congrats to you (as the country's rep, y'know)!

Thanks Wren, I just did a whole post about it. Bursting with pride we are today. :-) Oh there was some book stuff too. LOL