Back in the Reading Saddle

So I finally got back to some reading, nothing too exciting on Olympics last night until our Canadian figure skater was performing at the EXACT SAME FREAKING TIME as we were getting our gold medal in speed skating. Arrggghh. What are the odds of that? Anyway, on to the books.

This is a continuation of the Lost Shifter series and is Rat's story. He's the gothy IT expert who can't hold his shift if he gets nervous, scared, etc. so is looked down on and generally harassed by everyone which he counters by being a snarky asshole. Love it. They are still looking for the lost children when he gets a phone call from one of Mitchel's brothers whose rescuer has disappeared and left the phone. There seems to be an info leak so rather than tell anyone Rat goes to fetch him personally. Soon as he sees Keegan it's all over. Keegan returns the sentiment and Rat knows he'll be in trouble if he sleeps with the alpha's baby brother but .... You know how it goes. I really liked Keegan. Everyone thought he was all innocent and fragile but when you hear his thoughts he basically says he's never NOT been able to get someone in his bed and he'll get Rat (whom he insists on calling Carson, his real name). So Keegan is getting exactly what he wants, there's kind of a D/s overtone to their relationship. There is the mystery of who the info leak is, the conflict when Keegan finds out Rat slept with his brother Brent and also had a crush on his brother Jacyn. Ooops. There seems to be a problem as the kids are shifting sooner than they should and freaking when it happens as well which I presume will be explored in later books. I really liked Rat/Carson and Keegan as well. He was a bit snarky and knew his own mind despite being thrown into a world of shifters. My only issues were some editing things. Mitchell turned into Michelle in one paragraph at the end. A couple of other times I found weird sentence structure that I understood how it happened, but it should have been caught and came was game, little things. Oh and cover? Where is my long black haired goth boy with the eyebrow ring, nose ring and fingernail polish? Granted the cover is lovely and they are hot, but neither one is Rat.

Between a Fox and Hard Place 2: Geas by Misa Izanki (45 pages) 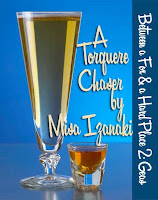 This follows up on the last book which told how Itzuke (the fox shifter) Aoi (the elf stripper) and Aya (a young elf) got together. They head off to Japan to meet Itzuke's family which is pretty non-traditional. He's got two dads and a mom. Everything is going great when suddenly Itzuke is stuck in his wolf form and has a curse (geas) on him. Seems Aoi's grandmother is determined he will take his place as guardian of the temple and has cursed Itzuke. If he agrees to stay she'll remove the curse. He does but he's useless at being a soldier. He step-mom's son wants the job so they conspire with his uncle to prove that the other kid would be better and release Aoi from his commitment. Oh, there's a fisting scene in this one, which is pretty unrealistic, but hey, the guy is a fox shifter and they other two are elves so I guess it's not that out there. It was okay, the plot with the Grandmother and how they would get out of it. But the plot to smexin' ratio was pretty skewed.

Between and Fox and a Hard Place 3: Home by Misa Izanki (40 pages) 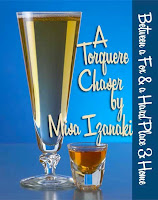 So they are back in Seattle, everything is fine more or less when Aoi attempts to rescue a kitten in the street and is hit by a mini-van. He is badly injured and stuck in the hospital for nearly a month with a broken leg which is not healing well. He is depressed, his physiotherapist keeps telling him now he can quit stripping and find a real job, he doesn't spend much time with the guys because they are working to pay the bills. He eventually gets back to work. The end. Not much to this one. Just them dealing with the aftermath of his injury and having lots of sex and some fighting. You did find out slightly more about the club but I had been kind of hoping that these books would set up the scene more for the club and the people there but it really didn't. It focused almost entirely on the three guys with some throw-away stuff. So it didn't quite give me what I was hoping for when I bought the series as they were the first books to be set in that world.


And just for fun, some more skiing boys. I was reading a bit of the article that came with the pics last night and seems these guys are from the Canary Islands and they hadn't ever spent time in the snow really. I guess it was above freezing for most of it but not for all. I presume they must stuff those undies because shrinkage would be a major issue when lying in the snow. Does keep the nips nice and tight though. LOL

I have enjoyed the series. It's worth a read.

Random model Jesse has an interesting face but funky abs. Looks like Lilliputians are playing water polo in his belly.

If you missed your figure skater, Tam, there's no need to freak about it. He sucked. (Sorry, I'm just being realistic.) I'm freaking because Johnny Weir got robbed!

I am definitely putting Stephani's series at the top of my TBB. Sounds great.

Between and Fox and a Hard Place never appealed to me.

I know, I know, he choked KZ. Sigh. Oh well, he's only 19, just a baby. To be honest once we were out we went to bed since it was already after 11:00 so I didn't even find out who won. Okay, I checked. I'm surprised the Russian didn't make it. Oh well, we'll see the replays today I'm sure. I'd change Jesse. I'd hate for you to be freaked my his abs.

I bought it because I'd liked the other stories about the club Lily, but I didn't find these characters so interesting. I just didn't care about them much. It was ok, but not much more.

I'll blame Kris for getting me hooked on Stephanie Hecht's book. :-)

That Russian was an arrogant SOB with a sense of entitlement that wouldn't quit. His assumption that he could jump his way to gold with a single quad really, really rubbed me the wrong way. And he was a prick during the medal presentation, too. What a douchenozzle.

P.S. You don't need to change your hotties on my account! Ryan's nice, though. His thorax looks closer to normal.

But I live to make you happy hon. :-D And googling hot boys is such a hardship. Sigh.

Congrats on the gold medal! And this Stephani Hecht keeps showing up. I need to check into her books.

I have an award for you over at my place :) -> http://erotromreader.blogspot.com/2010/02/happy-gay-friday-what-im-reading-and.html

Thanks Janna. It was a Canadian sandwich up there on the podium with her wedged between the two Dutch. :-)

Stephanie is new to me as well. But I like her style. Thanks so much for the award. I put it over on the left above my Good Reads. I appreciate the thought.

I'm glad you like the award. It's given to you with love :)

*sigh* Stop blaming me for your lack of willpower.

I really like Stephani's series - it was my first introduction to her too -, but am waiting for it to get to ARe because the publisher's site sucks big fat hairy donkey ballz. :(

Yeah, the site was rough. They e-mailed me back and said there had been some changes so maybe that was the issue. Not sure but taking 7 times to register was annoying. We'll see if now that I'm in it works better next time I want something.

K.Z. is going to be a bad influence on me. It's going to be hard to refrain from calling people "douchenozzles" now!

Johnny Weir did get robbed, BTW.

KZ is the downfall of many an innocent young girl. Look at me? :-D

I live to corrupt.

Thanks for the review, Tam. Sorry about the errors. I already alerted the EIC and she promised to get them cleaned up. When she does, I'll send you a clean copy of the book.

I do have one issue, however. My son's ski team just ended their season and not once did I see any of your hunky, naked studs on the hill. I call shenanigans and demand that you send some of those yummy snow puppies to Michigan.LOL!

LOL Yeah, I've never seen them in Canada either. But maybe we need to plan a trip to gay ski week in Europe. I'm sure that's the place to find them. :-)

I have the first two in the Stephani Hecht series, on your rec a few days ago...

So I will get to that one soon..

Any other shifter you can rec - I am just going to start the Mary Calmes shifter book...

Chris thought it was ok...

I highly recommend JL Langley's Without Reservations and With Caution (to be read in that order). They are wolf shifters. I ADORE the second one. If you like a fantasy setting ML Rhodes Draegen Lords is a good series about dragon shifters. Stormy Glenn has many books about wolf shifters. They aren't high art but are easy and fairly easy reads if you just take them for what they are.