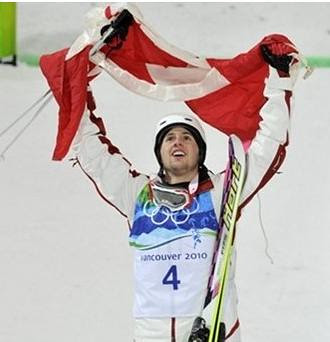 Usually Mondays are not my happy day, but hell, after last night's Olympic results I'm a happy camper even on a Monday. So Canada won it's first gold medal at an Olympics held in Canada. Cutie patootie Alex Bilodeau won the gold in men's freestyle moguls. Australia got silver but he used to be Canadian so we'll take partial credit. :-) US got the bronze and he's a total newbie so I'm always happy when that happens. Canada was also 4th and 5th and while I would have loved to have seen a sweep we were still pretty happy. All of the guys on the team live together and it was funny they were interviewing them all and the one guy goes "We live together, eat together, sleep together ...." They all looked at each other and burst out laughing. So we'll just let my imagination run with that. You can see some amazing shots of the competitors, not just Alex here. Some of the aerial shots are amazing and a couple of the crashes too. Ouch.


Alex is a pretty special guy. His older brother has cerebral palsy and they are really close. He says his brother is his inspiration and if he's whining about practicing he thinks of him. Afterwards they showed video of them hugging and they were standing with foreheads together talking and it was so sweet. So I'm really glad it was him who broke our dry streak and now we can go on and focus on some other medals. We got a bronze in speed skating and we had a couple of other great results, 6th in biathlon which is the best we've ever done and he's a cutie (must post pic) and our luge guys had best ever results for Canada as well. No medals but it's not always about the medals. Our figure skating pairs are in good position as well so hopefully we're set to make some other great memories. 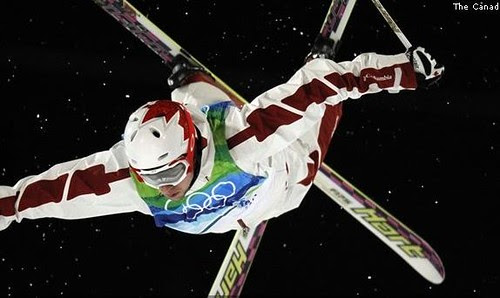 It looks amazing with the dark sky behind him. 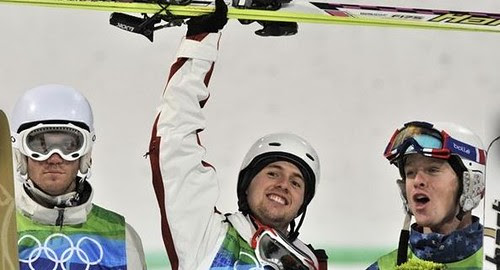 The Australian guy is NOT a happy camper. LOL The American is tickled pink. I saw the scores and Alex was behind the Australian by .1 in one aspect, ahead by .01 in another and it was really those tenths of a seconds in time that made the difference between gold and silver.

Needless to say I spent most of the day glued to the TV and didn't read too much but I did finish a couple. I had talked about the world created by Misa Izanaki and how it interested me but I felt like I kept getting bits and pieces so I finally went to her website to see how I was suppose to read the books to see if it made sense. Not really. LOL It starts with a Torquere Chaser series and then various add-ons, but there's not really one that sets the scene of the club. I did find out it's in Seattle. So that was useful. Anyway, I got some of the books to see if it helps me figure thing out rather than piece them together.

Aoi is an elf who works at the strip club (that the stories all revolve around) and his lover is Itzuki a kitsune, a fox shifter. One day Aya shows up and claims to be Aoi's 20 year old son. Seems he's not although Aoi had an affair with his mother (who abandoned Aya at 14) years before. Aoi takes him in though as he has no family or means of support. All three seem to get along when Itzuki starts encouraging Aoi to go for it with Aya as long as he can be part of it. After a hot night of smexin' Aoi gets freaked and is not sure he should have as he feels kind of like a father-figure (albeit a bad one). Also Aoi's grandmother and father show up demanding he take up his role as guardian of some temple which he refuses. They then talk about going to visit Itzuki's family in Japan which are the next two books. Meh. I guess it's mostly a set-up for these guys, some family background, etc. but it didn't suck me in like some of the other characters I've come across in the series. But we'll see how books 2 and 3 go. Maybe I'll care about them more then.

My One and Oni by Misa Izanaki (68 pages)

Ugh, that cover - HATE IT! Anyway, this is not part of the series above but I bought it because I appear to be binging. Bad me. Alexi grew up in Hawaii where he was always freaked as a kid about the monster in his closet who would eat him. His mother tells him it's an Oni, a Japanese ogre who is there to watch over their family but as a kid he never believes it. He's now 25 and living in Seattle going to university when he comes home to clean out his room. Kai, the Oni, reveals himself and after Alexi initially freaks they get freaky (cause Kai is the hottest ogre ever). Kai is upset when he realizes Alexi is leaving but follows him to Seattle where they move in together and have to adapt to Kai being a pushy stubborn bastard while having tons of hot sex. They then try to find a way to stay together and Kai is almost killed by Alexi's professor who is an ogre hunter (yep LOL) but he tells them for him to be human he simply has to snap his horns off. Easy peasy. There is this whole subtext of Alexi and his father not getting along but it's not really spelled out why. His Mom knows he's gay and knows about Kai but I'm never sure if his Dad does or not. Anyway, it was okay. Not amazing. One word that came up here is bo-ya which Kai calls Alexi and in the other book they call Aya that which I assume is some kind of Japanese endearment like "boy" because I googled it and could only find reference to some historical figure called Boya.

Oh, and Alex too, Congrats!!

I haven't read those books and I so agree about the cover. UGLY!

Lily: It is an ugly cover, it's a typical Torquere cover they use on several books. I think they've discontinued it, thankfully. Thanks for the congrats. :-)

Chris: I have to say in this case the Olympics were more exciting than the books. LOL By a mile or so.

Thank for the intro to a new author...

Really? I've never watched Power Rangers, maybe the author did. I was kind of surprised at the ease which he broke his horns off and voila, human. You'd think just accidentally smacking his head on the wall during rough sex would have caused that centuries ago. LOL

But what's more important: Go Canada!! :)
Don't you think there might be another medal in store for Witherspoon at the 500m skating?

(Maybe they've already run the race, overhere the games are aired with a serious delay - it has something to do with TV rights...)

The speed skating is on right now. We have it on. I'm not sure about Witherspoon. Something says it's not going to happen. We just got the silver (missed the gold by a hair) in the men's snow cross. What a crazy sport.

Is that with the snow boards going down with a bunch as fast as they can?
Well, I'm not going to stay up for the speed skating, I'll just hear it tomorrow if the Dutch uhm Canadian boys were fast enough... Enjoy watching :)

And congrats to the Canadian medalists!

Oh, and I've quite been enjoying the male figure skaters' butts. Tight pants over round ass = happy eyes!

I'm glad you approve. LOL Figure skaters do have the best butts.