Well, it's the last day of the Olympics. Canada had an amazing last couple of days. Friday night Charles Hamelin in short track got two gold medals within an hour. (The one with the beard.) One in the 500 metres where Ohno was disqualified for shoving the Korean just before the line so we got the bronze in that too. Then in the 5000 relay we were ahead the whole way so Charles, his brother Francois and the other guys got the gold. US, the bronze. Those short track guys are really tiny, but our men looked huge. Especially our dread locked rasta man. LOL 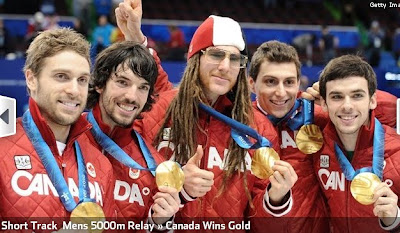 It was adorable when Charles won the 500 m his girlfriend (who won a silver at the Olympics) came flying down from the stands and leaped up on the edge and he leaped up from the other side and they were hugging and kissing. We also got a sliver in women's curling, the gold in men's curling, the gold in men's speed skating team pursuit, a bronze in bob sled (we had a bad crash too which took one of our teams out) and then the gold in men's parallel giant slalom. My daughter and I were having a heart attack here. It was pouring rain and our guy was .75 behind and had to make it up and pass the guy on the second run. Ack!!! I can't believe he did it. So we ended on a high note. Of course we still have a medal waiting in hockey today and there is the 50 km cross country (I'm dying just thinking about skiing that far) but I'm not sure we seriously have a chance there. I believe Canada has now received the most gold medals of any one country in a winter Olympics. We are third in total, but have the most golds. Really can't complain about how well we did, just took us a while to get going. So no more Olympic updates from me.

I did some reading too. Surprise.

I have put off reading this because I knew it was an angst festival even though I love KA Mitchell's work. Yep angst galore. Almost needed a tissue a few times. Amazing story, but if angst isn't your thing you may not enjoy it. Sean is a teacher who's been with Kyle for 6 years. The day of their anniversary there is a school shooting and Sean tackles the shooter getting shot himself. He survives and is deemed a hero and a PR guy starts getting him on Oprah, etc. where he can try and change the image of gay men. It's basically 300 pages of watching the slow erosion of a perfect relationship due to dealing with the physical aftermath, the emotional crap and how people are changed irrevocably. Also Sean refuses counseling which doesn't help and Kyle walks around saying "fine" to everything. I swear if I heard "fine" one more time I was going to slap someone. LOL But I think it was amazingly well done and depicts what often does happen after a life-changing event. People are never the same and working through it doesn't always happen in a nice steady way. So a fabulous story but not something you read when you want something light and fluffy.

Raphael is a vampire who has basically been stalking Aleric since he moved to London three years ago. He just feels compelled to be near him. One night he rescues him from some muggers but Aleric is stabbed and the only way to save him is to turn him into a vampire. Amazingly it goes pretty well, Aleric has always had a thing for guys and they burn up the sheets. However the vampire clan in London is run by a woman. It's very bad to create a new vampire without her permission but Raphael lives on the outskirts of the clan. He takes Aleric to meet her and see the great big gay orgy that is living with the clan. Aleric is not impressed when he finds out Raphael was stalking him, but on the whole he wants to stay with him and not live in the porn palace but they know they have to leave London (for somewhere warm, smart men). Yes, it was historical but it was set in a very specific world and only takes place over a couple of days so I quite enjoyed it. I like paranormal historicals I think I'm finding. I enjoyed Raphael and you got to know the real Aleric, not just Raphael's image of him from afar. I also think the guy on the cover at that book is swoon-worthy. So if you like vampires or historicals or both I think you'll enjoy it.

Oh yeah, the pdf version says 80 pages but the story is only 65 or so. What's in the back you ask? Well, I knew this before I read it because Jenre commented on it in her review so I wasn't overly annoyed. Also there is an excerpt from the author's other m/m book which I did read (sounded interesting), then there was an excerpt from Charlie Cochrane's book and Mychael Black's book, again both m/m so I can live with this. At least they are in the same genre and might catch the interest of the reader
Posted by Tam at 10:48 AM

Hmm. Still not sure about From Afar.

Oh yeah. RSL was such an angst fest. I wanted to yell at them both more than once. "Talk, dammit!" But unlike so many books in which I have that urge, I could understand why they weren't... and I'm not sure I would've behaved any differently.

I have RSL on my TBR pile and I keep putting it off because I know it's going to be an angst fest.

When I'm in the mood I shall read it.

That was it Chris, I think how they behaved was totally normal and I would have done the same thing. It doesn't come off as unrealistic although as you said, just talking would have helped although every time they tried they ended up fighting.

From Afar was not very historically (LOL) if you know what I mean. Since it took place over 2 days and mostly was the two guys alone or with the other vamps you didn't get a lot of the stuff that usually can drag an historical down.

I'm not sure why I was in the mood Jen, but it did affect me while I was reading it (perhaps a less than stellar mommy moment or two LOL). But it's a well done depiction of what I think happens more often than not to a relationship, no matter how strong, when a life changing event happens.

I think that's another another thing I like about m/m romances - too often in m/f romances, the heroine seems to talk through all that pesky relationship crap easily. I can relate a lot better to the insufficiently conversing heroes in m/m romances!

I know exactly what you mean about historicals - I've discovered I'm ok with them when they aren't filled with pesky history. ;)

I agree Chris. I'm not a talker and I can relate better to guys I think.

Heh, I actually had a conversation with a previous boyfriend about that - apparently he thought initially that it was most excellent that I wasn't all into discussing and dissecting our relationship, but then slowly realized that if neither of us was into that stuff, difficulties ensued.

Great reviews, Tam! It sounds like From Afar is the one for me. I've liked the other two books by Ava March that I've read. RSL just sounds way too sad!

I'd never read Ava March before but I did enjoy it.

It was sad and frustrating because you saw the deterioration of the relationship but yet it kept me interested and hoping that they could work it out. Which of course it's a romance, there is a HEA, but it did make me tear up a few times.

Chris: My ex and I were opposites, he was the artistic feely type so I'm not sure having one of each works much better. LOL

I started From Afar and stopped - I love Ava's work - but I have to be in the mmod for some books..

Angst is Mitchell surname - glad you liked it...

I've never read her books before Janna and I did enjoy it. There were a few little moments of humour which I always like.

I love KA Mitchell's stuff but the angst level on this one was off the charts. LOL Luckily well done though.

I loved RSL although I did want to smack them both several times! :)

I love vampire stories and really enjoyed Ava's historical Object of His Desire. I've got this one in my TBB.

I wanted to smack them at times but how often do we say "fine" when someone asks how we are because we don't want to bother them or deal with it? Too often really so I understood it even if it's frustrating for those of us on the outside watching.

Obviously you thought I was already here, lol! But I was watching the ice hockey final last night and boy that was a thrilling match :)
Congrats on the succesful Olympics, Tam!
Great reads you had!

LOVED RSL! I found it completely moving and hooked me on KA Mitchell. I was a bit annoyed by the whole 'papi chulo' thing for some reason, but totally fell in love with the characters. I've read it over 10 times already...

Oooops. How embarrassing. LOL Well, I knew you were coming Janna. ;-) Sorry EH. The Olympics did end on an up note especially for Canada.

Hi Mariana, thanks for coming by. I can imagine rereading when I'm in a madulin mood and need some angst. I do think K.A. Mitchell is a great author and I love her work.

Whoa From Afar is only 35 pages? M'kay not falling for that ish. I want to like Ava March I really do, but I feel like her stories don't have a strong closing. I love the beginning, middle and then wham bam I feel like the story ends. Am I the only one that feels this way?

LOL, that's sweet of you to say, Tam. And I don't mind being mixed up with EH at all ;)

I added RSL to my to-buy list, I like a romance with a HEA that can make you yell at the characters and tear up a few times too, and I really want to read some books from that author :)

I Smokin'. No no, From Afar is 64 pages itself PLUS the promo pages in the back. It's the first Ava March I've read so I can't say. This one certainly could have gone on longer as their relationship was really only starting. Maybe there's a sequel in the works?

That sums up RSL very well Janna. And the smexin' is hot too. :-)

You really know what button to push, Tam! Hot smexin' - I've downloaded the book to my ereader :)

Oh good, I'm not into stories that are dealing with sexual issues ;)