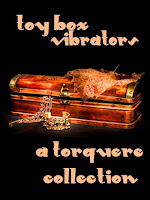 A little trio of stories about boys and their toys. I really didn't realise that each story was only 10 or so pages long. They seemed longer. First one is a university student who thinks he's alone in his dorm over Christmas and buys himself some toys. He's walked in on while using them with a friend/crush who joins in of course. Second story is a "straight" guy who goes to buy a vibe as a joke for his friend getting married and gets hit on by the adult store owner. He opens the package (curiosity killed the cat) and has to go back for another and gets a lesson from the owner. Third one is two detective and one gets a mystery package with a bunch of toys. They use some of them and then realize someone sent them to him to hide from his sister. Ooops. Used her toys. Not sure I had a fave of the three. They were all cute little stories and as I said, for 10 pages each they packed quite a bit in and were satisfying. (haha)

Val gets a chance to go to the jungle as an anthropology intern but gets waylaid by his sister who insists he go and rescue her kids who were supposedly kidnapped by drug dealers who killed her husband and beat her up. Seems the anthro boss's family wants him to go and find his pregnant sister who also disappeared so he and the sister's fiance set off and just happen to meet up with the intern. So they team up and actually find the kids with the sister and they weren't really kidnapped. Huh? They get back to civilization (someone dies on the way) and it seems purely by coincidence the intern's mother was having an affair with Rick's father AND grandfather back in the day so Val's sister is either Rick's sister or aunt and there is DEA involved and blackmailers and ... Okay, I actually tried to draw out a family tree to figure out if Ricks Dad and Val's Mom had a baby, would Rick and Val be blood relatives? I was scribblig on a piece of paper and I'm still not really sure how the guy was rescuing the kids with the diamonds and why they send two people on the same mission. It truly was a tangled web. Now I liked Rick and Val as characters although they pretty much fell in love on first sight, not lust, love. The jungle setting was cool (or hot I guess) and described well but I just found the whole story a bit confusing. I think they need a follow-up story with less happening, just tell me about their 3 months on the dig site, maybe a jealous coworker to stir things up and a case of malaria and that's plenty of action. There was so much action I didn't think the guys really got much chance to interact as they were constantly fighting off soldiers, dealing with gun shot wounds, fire ants, the DEA, spies, etc. Lots of potential, just a bit busy for me. 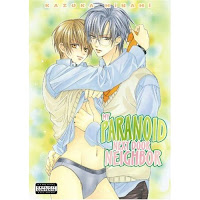 This is my first yaoi and I read it on-line. I wish it was all in color, it would have been easier to tell them apart. Basically a story of childhood friends who drifted a part. Blue hair moves in with his friend because its closer to the school where they are studying for university entrance exams. Of course blue hair pursues brown hair who is freaked out. There is this weird English teacher and a best friend who try to come between blue and brown but eventually they work it out. The story was fine and pretty typical but it seemed all the boys in the gifted program were aggressive doms who would basically attack and molest any person from the normal program who wandered into their halls. It was like a Japanese teen gay Mad Max. The English translation needed some work but on the whole it was okay for my first experience. Oh and there was no next door neighbor. Although it was explained to me that the one kid was the neighbor as in "the next bedroom" being his neighbor. Oooooooo. It should have been called My Paranoid Room Mate because I kept waiting for the neighbor to show up and then it was over. LOL

Seth goes for a massage and gets so turned on he humps the table and freaks out David. (No doubt - I didn't blame David at all for freaking) but I thought Seth was a asshole (which was the point I guess). Seth is now raising is dead sister's daughter and suddenly notices David is a waiter at the restaurant. Much misunderstanding and condesension follow and they eventually get together. Meanwhile the little girl's father starts demanding money and Seth's ex shows up and its a bit crazy. The father attempts to kidnap the little girl when she's out with David. She's okay and Seth realizes that David's little sister is his daughter, some misunderstandings and arguing happens (oh and yeah and someone took pics of them having oral sex in a parking lot - let that be a warning boys and girls). But in the end they work it out. A case of opposites attract, Seith lightens up a bit and ... I'd love to have seen an epilogue of Seth and David living with both little girls, but I'll have to imagine it. I liked the story and although I didn't like Seth all that much he had some good points. He didn't let anyone bully him and was prepared to go to the cops or get a lawyer when needed. It was a fun read with some funny parts, not as funny as Gobsmacked but still a recommended read.
Posted by Tam at 6:54 PM