Not sure why I was out of sorts for a bit. Ended up rereading bits and pieces of books, couldn't focus on anything long (still sort of there) but being kid-free seems to equate spending money on books and staying up too late reading them. Bad me. 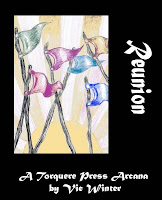 Kind of a typical story of geeky nerd goes back to highschool reunion 10 years later as hot rich dotcom guy and meets up with highschool jock he always had a crush on. At least in the case the jock had not been a total jerk to him. For a short story I liked it (I like this author's shorts) and it seemed to cover a lot. It dealt with him wanting "revenge", to show them up and rub their noses in his success and then realizing maybe that wasn't so important. And the popular high school jock who was a virgin because he wasn't really out yet but had always liked the nerd and now Ryan (Mr. Nerd) is more confident and the sexually experienced one. There were humerous moments, where they are heading to the hotel room because Ryan as the "stuff" and they get cornered by the head cheerleader and forced to go to brunch. While trying to think up excuses why they can't the jock goes "I hope they have bacon." and there is a little funny piece about "that was the best you could come up with?" It made me chuckle. I thought it ended a bit too much as if they were in high school but maybe that was the point. When you go back to these things you revert back to how you call acted and it would have been appropriate. Cute story though and I enjoyed it.

This is the first book I've read by this author and I noticed in reading the review that some people said they couldn't put it down. Ummm. Yeah, EXHAUSTED yesterday because I was up until 1:00 to finish. I really really liked it. I liked the characters, I like how it took them awhile to get to the good stuff and I was even okay with the mystery which some people were eh on. But I have to say, it so reminded me of my past life. My ex was an artist and I swear never again, can't deal with that volatile personality (although he was not as wild as Zeke LOL) but I could see the dynamic there. Whew. So highly recommend it. Great read. Oh and I hope Red and Carter get a story.

Another one I stayed up way too late reading. See? I'm awful. This is a May/December romance story. Rob is a 21 year old college senior and his next door neighbor Vince is a 45 year old college professor. (not the same college to avoid the squick factor) I know some people really don't like the huge age gap romances and in real life I'm not sure it works for me but I don't mind reading about it. Rob sets his sights on Vince (and of course Vince thinks he's cute) but it takes about 3 or 4 months before they kiss and then Vince freaks out thinking he's too old, blah blah blah so he's harsh and they are apart until March when they finally hook up and agree to take it slow. Then Vince leaves to care for his ailing father and starts to get angsty again about what if he's old, etc. They do finally get back together at graduation and it shows them a year later living HEA. I liked it because the author made it clear why Rob was attracted to him, that he wanted stability, someone who wasn't into bars and partying and sleeping around so it seemed like he would be honestly attracted to him. It wasn't just about sex, he wanted what Vince represented so it worked for me. Would it work in real life? It worked for my cousin. I've never read this author or heard of her but I enjoyed the writing.

I bought this because he wrote Vintage which I loved. Its another YA with two high school students. One of who has some kind of disability and is going away for surgery and could lose his foot. When he drops out of contact the first one starts to question could he love him if he's an amputee and he cheats on him with some kid in the forest. He then finally gets a call saying his BF will be okay and the surgery worked and then it just kind of stops. Ummm. What? What happens? But there were lots of refernces to the gingerbread man and parallels to that story which starts when he asks the BF if he'd rather sleep with the gingerbread man or the fox so that was very well done and clever. I like his writing but I thought it was just kind of an abrupt ending but maybe I missed the point.

Around the World by Jade Falconer (28 pages)

This is the second short I have by this author with the same theme, May/December romance. I also seemed to have a theme yesterday. Another young neighbor story. This time a 40ish year old travel writer runs into his new 21 (or so) new neighbor (with neon orange hair?). They get to talking about travel and just being friends (old guy always figures no way young guy is interested) when he gets an invite to a wedding where he knows his ex will be there with his younger lover. So young guy kind of hints that great revenge would be to show up with a stud of his own so they plan on that with old guy thinking "just friends". Once they get to the wedding and ex is rude they ramp it up and end up missing the ceremony and getting funky. Considering how short it was I liked it. I thought it seemed plausible, getting to know each other, angst over the age difference. Its a HFN story, you don't know if they end up together for always but I liked the characters and the idea of getting back at your ex by showing up with someone hotter than he has. LOL