Dreaming of You by Ethan Day (143 pages)

Mixed feelings here. I loved the first 100+ pages. Laughed out loud several times. Then? If he was my boyfriend and he told me what he did I would kick his ass to the curb. To blow me off when I offer you half my business, you claim to love me then go chasing after some guy from a freaking dream just in case he's better? How many other dream guys are you going to chase wondering if maybe they are better than me? So I have to say I went from loving it, loving the characters to not liking him very much at all and while sure, he went to Cali to be with Logan I felt Logan deserved better, maybe his friend Sam would respect him enough not to wonder if the next best thing was waiting around the corner. So mixed feelings.

This is one of my favourite authors. This is a continuation in a sense of St. Nacho's with Coopers old boyfriend Jordan who's finally got his head on straight and is a massage therapist. He moved to St. Nachos and gets a job at the local gym doing personal training and therapy. He meets a young baseball player who is recovering from an injury when he was hit by a drunk driver. Even though that's why Jordan was in prison they are drawn together. Jordan has angsty issues about not being worthy of anyone and having to atone for what he did and Ken's family thought he was straight and even if he's gay they don't want him with an ex-con ex-druggie. Angst and an unsolved attack on Jordan follow and in the end its a HEA. I loved many of the secondary characters. Ken's youner brother who liked Jordan but had trouble dealing with his brother being gay, Izzie the body building gym owner, of course Cooper and Shawn were around a bit and Jordan's Mom who was trying to escape an abusive marriage. So all in all a great read despite the fact that its in first person POV which is a bugaboo for me. It wasn't bad.

Seth is a math professor and werewolf and Rafe is is unknowin human lover. They go to DC and Seth is attacked in a bar but basically takes everyone out. It happens again in a bookstore and he finally has to admit to Rafe that not only is he a werewolf he's a mutant and most like him are killed at birth, he's being hunted, he's dangerous, etc. Rafe does pretty well dealing with it although Seth has trouble accepting anything other than what he's been told about people like him. In his werewolf form he's agressive, in human he's submissive. Eventually the hunters he's been running from find him and a vampire named Dorian helps him because he admits he loves Rafe and wants to protect him which supposedly ravagers can't do. So he lives HEA with Rafe who accepts his wacky side. Overall I really liked the story and I know some people think its too angsty because Seth can't just accept that Rafe loves him, but based on 32 years of being mistreated and told you are an abomination, I don't think that just fades away the first time someone says they love you. I enjoyed it a lot. 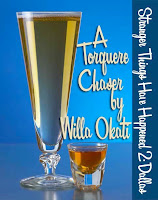 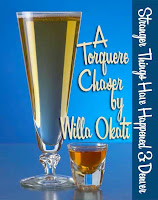 Rack decides that Josh likes the "idea" of him and Daniel so they should show him what's its all about. So basically Josh watches Daniel and Rack do the dirty and decides they are right that he shouldn't have tried to come between him. They are tired of the life on the road so decide to take off early and head home taking Josh with them to act as their accountant or some such. They introduce Josh to their family at the studio and he fits and in and one of the guys seems drawn to him so all live HEA. I thought the having sex in front of him thing was kind of weird but it was okay and I felt compelled to finish it just because I'd started it.
Posted by Tam at 10:30 AM

You adorable thing, thanks so much for giving it a read, I know that first person isn't your (everybody's) thing. Actually it isn't my thing either, really, to write, so the Nacho's books maybe the only ones I'll do that with. There might be more of those, though, you never know. I really like Santo Ignacio, and if I can't live there I may visit every now and again!