Monday Mumbling ... Are you sure your hand is supposed to be THERE!? 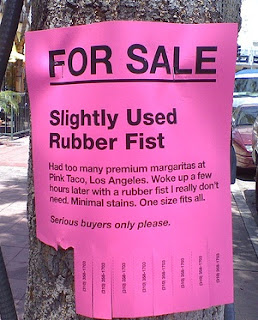 
These are the only ones I can think of off hand. As I noted, it's not something I've heard of it m/f romance, but maybe I just don't read the right books. :-) I don't go searching them out m/m though. I know there was a book lately that had a fisting scene on the side of the road with no lube. Ack! At least these put the emphasis on prep, not just ram it up there. I think this is one of those practices for me that I can enjoy in fiction on the page, but am happy to have it stay here.
Posted by Tam at 7:57 AM

"These are the only ones I can think of off hand."

The side of the road one was Roxy Harte - I'm Not Gay, I'm sure - but I do remember lube & a very handy latex glove!

Guess it should have been on-hand Kris, like a puppet. :-P

At the time, though, I was so clueless that I was reading it only as a historical, and completely had a "WTF" reaction at the end, like, "Did they even KNOW about that in 1880?" Ha, ha! And it was a really good historical up to that point.

That's a good point Val. Well, I'm sure someone thought about it, but it does seem a bit out of the norm for the time period.

It seems like it's in a lot of books I've read recently, but I can't remember which ones...

Perhaps in an effort to preserve your innocence Chris, your brain has blocked those incidents out. :-)

It's like SM, I have a ton of books and I'm positive there must have been some but ... It obviously didn't leave an impression.

I'm pretty sure that's a pointless attempt at this point...

Definitely in the Jarheads book or at least number 3 which is the one I read :).

I'm with you Jen. It doesn't freak me out but I wouldn't miss it if I never ran across it again either.

I think we cringe because we know real life isn't quite like fiction. It's hard to ignore that fact even when it's well-written Patti. :-) Ouch.

Packing peanuts. LOL Yes, that is amusing. I hate those things, they end up everywhere.

Oh yeah, if anyone would go for it, it would be Jim. Mind you, he'd probably agree to fuck a porcupine if Marcus asked. Sigh. I don't really remember the scene, I must have been glazed over by that point.