Well, my business part of the trip is over. Sat in on some good seminars, met some interesting companies and had a chance to talk with my colleagues from Mexico to New Brunswick and everywhere in the middle.

Today my daughter came on the train and I picked her up and we went out for dinner. I think she missed me because once I got her fed she started talking and didn't stop for about 2 hours. Just sat on the hotel bed and talked my ear off. :-) Tomorrow a good friend of hers she met at riding camp a few years ago is coming into the city and we are going to meet at the big mall and they will giggle and hang out. I guess I'll be relegated to hanging with the Mom. I've met her but don't really know her.

So Tuesday night I had two receptions to attend. The first was hosted by Atlantic Canada and it was held at the Hockey Hall of Fame which was very cool. I've never been there and it's quite small so we had the run of the whole museum. That was fun. This guy was a chef from Nova Scotia who explained lobster aquaculture to us, how to know which lobster is a boy or a girl and a demonstration of mating using cooked lobster. 0_0 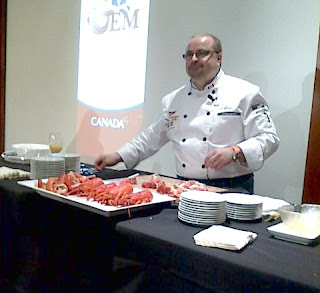 Then we raced over to another reception hosted by the Niagara region. They had great food as well and it was held on the 35th floor of an office tower and the view was amazing. You could see right out to Lake Ontario and see the CN Tower. I was really impressed. 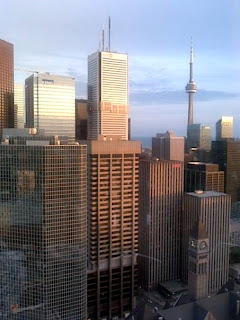 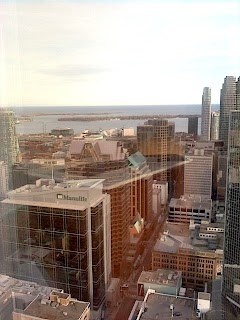 Then with very sore feet I trudged back to my hotel which was only a few blocks from the CN Tower. On the way back I found this chair in a store in the tunnels. It's a bit large to send to Kris, but I thought of her when I saw it. It was kind of cool and red. 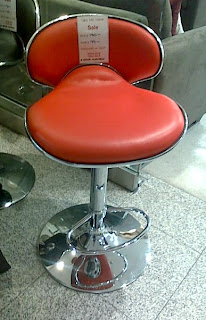 Hopefully it won't rain as much as they are predicting. Of course it was nice all week and now rain. Sigh. We head back to the airport at 4:00 Sunday. Have a great weekend everyone.
Posted by Tam at 10:38 PM

I had no idea Australia had an ice hockey team. Huh.

So, our high Tuesday was 88F and our high today was 55F, with rain. I'm guessing the rain that was here all week's hitting you there... Hope you and Kristen stay dry and have fun!

"I had no idea Australia had an ice hockey team. Huh."

Neither did I. The things you learn.

And a photo of a chair, doesn't count.

Damn you for sending us rain Chris. ;-) Thanks to Toronto subway and tunnels and huge mall I think we shan't melt.

I'm not sure you have one now Kris, since we probably have your sole remaining jersey in our museum. LOL But you did, I think it was in the 70's.

I hope you're having fun!

*whispers* Buy a Barbie chair and paint the Canadian flag on it.

We're having a good time. A friend of the kid's came into the city today and they went off on their own shopping and then we went out for dinner and now they are talking their heads off in our room. :-) Not sure when she's leaving but whatever, they are having a blast. They met at camp about 4 years ago and even though we live far apart they are bestest of friends.

Oh well Stephani. there is always next season. :-)