No I haven't taken up gymnastics, however I have taken up ungracefully falling in the street. I went to cross the street this morning while fiddling with my ipod and reading my phone (bad I know) and kapow, flat on my face. What was worse was the guy who ran out to help me. Ugh. So graceful. Amazingly my phone and ipod were unscathed, my hands not so much. The right one bore the brunt. Owy. My elbow is also hurting, I think from jarring it when I landed on my hands. 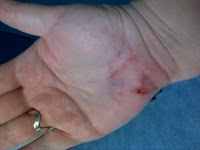 This should be Monday, not Tuesday. And I swear I shall never complain of the cold again. It's going to be 37C with the humidity here today. That's 100F for you down south. I told me daughter not to go to her volunteering today as it's gardening outside in the sun. Too hot at 3:00 in the afternoon. I actually got my act together and put my window a/c unit in my bedroom this morning so at least our upstairs should remain cool even if the main floor gets hot.
Also it's my kiddo's final English presentation. What a freaking nightmare. They had to do something CREATIVE as a visual aid. No, she can't just bring in a baseball bat (Shoeless Joe by WP Kinsells - basis of Field of Dreams with Kevin Costner), it's not creative enough. So she decided to cut out a bat out of fabric and write passion on it, then a cloud and write dreams to represent that theme, and then something to represent the balance between lyrical prose and the minimalistic style. Ummm Yeah. What item do you propose we cut out of fabric for that? Arrgghhh. Ended up being  square piece of fabric with a painted balance scale on it and the words balance. Then they are rolled up on paper toweltube, attched to a 5 foot dowel and she can unroll the pieces as appropriate. OMG. What's wrong with a PowerPoint? I have NEVER had to do something like that in the real world. And her speech has to be between 6:30 and 7 min. She was practicing last night but is a bit nervous. I think also being the only Gr. 10 in a class of Gr. 11's she feels kind of obliged to be their equal if not better. So not sure how much lunch she'll eat today since her presentation is right after lunch. I thought once we got out of elementary the stupid projects were finished. Apparently not.
Okay, enough whining. I did a bunch of reading on the weekend, so time to catch up.

This is book 2 in the Wizard's Touch series staring Jaynell's roommate Kevin and pack alpha James. Although they've been to bed, Kevin is freaked out by commitment due in part to the fact his father was an elf and they don't do monogamy and he feels he's not much of a wizard, therefore not a good mate for an alpha. So while Kevin is waffling over whether he wants to mate and the significance of that, James spends his time trying not to freak Kevin out by being too possessive. However when a female friend who started dating one of the triplets is killed and her magic sucked out, things go haywire, in combination with a supposed investigation into Jaynell killing the Senate member who tried to kill him. When Jaynell is kidnapped by mysterious wizards, they have to find him, even if it means confronting the wizard Senate and dealing with a nasty cult on campus. This was an okay story, but Kevin was kind of wishy washy and I wasn't enamoured with the cult story-line and why they were doing it, but I liked his avatar Crag, a gargoyle. I'm wondering what's going to happen with the triplets, 3 stories or less? *wiggles eyebrows*

This book started out hilariously. Randy is just kind of odd, he sees a guy on the street, and is sure he's a serial killer who seems to follow him home. He's shocked when he realizes it's his neighbor across the hall, and embarrasses himself further by trying to apologise. His social skills are lacking to say the least. He's invited to party by his best girlfriend, and unfortunately it's at Dave's place, however Dave seems willing to forgive him. Dave is an international student from New Zealand, and they start up a relationship, only problem. Dave has to return home in a few weeks and Randy's ex has shown up since the restraining order ran out. As I said, it started out very funny, I must have laughed several times in the first few pages, and when Randy ended up drunk in the hallway rolling around outside Dave's door, it was very funny. I know it's hard for an author to maintain that kind of humour for the long haul, but I was disturbed by Randy's response to his ex, and how he didn't want to phone the police and kept letting the guy in. You had a restraining order, but you don't seem to get it. His girlfriend was mixed for me, one she seems to find it hilarious that Dave is leaving, haha big joke on Randy, and then again she finally helped him get his shit together with the ex. So on the whole, I enjoyed this, but I have to say that I loved the first half, liked the second half. Still worth a read just for that first half though.

Galaxy (yes, he had hippy parents) has moved to Sutter's Bay to help his younger brother who was abused by his step-father for years. (younger being 19 but damaged). He moved there because he remembered the first guy he ever had sex with 10 years ago mentioned he came from there and it stuck. In search of a part-time job since being an artist isn't paying the bills, he goes to the diner which happens to be run by that first guy, Adam, who returned home to run his father's business. There is instant attraction again and they start dating. Things are going well and while there is an incident with homophobic graffiti, Galaxy who sufferers from migraines and a type of glaucoma faints, burst and he needs brain surgery. Luckily his friend Tony from 10 years ago is there and along with his brother and Adam they get him through the health crisis. There's not a lot of outside conflict beyond the health incident, but when you are in the mood for a non-angsty read with nice normal "older" guys (Adam is around 40 and Galaxy is 30), it's a good book with a "feel-good" ending. I'm assuming Galaxy's brother and possibly his friend Tony have a story coming. It was kind of hinted at.
Posted by Tam at 12:30 PM

So sorry to hear about your tumble! I hope the aches and scabs go away soon.

I'm curious to know how the English project turned out. Sounds like a hassle, but maybe they're trying to use the "different ways of knowing"!

Whoa, Tam, what a bummer about the tumble! And your kid's project sounds very exacting. It's a big enough deal that she has to give a speech, but to have to integrate props? I love the idea of her somehow being able to use PowerPoint! Very practical.

It's a different way of driving parents crazy including melt-downs in fabric stores. Sigh.

It looked quite cute when she ran through it last night. She unclipped the fabric and it rolled right down like a banner, She should be done now, they haven't phoned to say she passed out, so I think we're okay. LOL She can be her own worst critic at time and judges herself far more harshly than most teachers do.

I have quite the bruises on my palms which is kind of weird, but I'm sure I'll survive, the physical injury if not the embarrassment. Gah.

She LOVES PowerPoint presentations Val. She can whip one up in no time flat complete with music video and animation. To my mind that seems far more practical and something she'll use in real life, artsy representation of themes, not so much. :-)

Hmm. I can't recall ever needing to do a project like that in the business world... but maybe if she goes into theater... hopefully it went well for her!

The only one of those I read was Galaxy's Heart - looking forward to his brother's story.

I have bruises on my palms which is unusual. LOL And my elbow hurts, but I'll survive. At least it wasn't literally face first.

I know, those projects are weird. I think they believe kids will be more interested if it's "creative" but it's just annoying since they spend time angsting over some art project rather than the subject at hand. Lordy, I'm old fashioned. LOL

I'm looking forward to book as well. I have a feeling it will be with his old friend Tony since he was kind of friendly with the brother. :-)

Sorry about your hand, but I bet if you got to rub it up and down and back and forth across the ridges on your hottie of the day, that'd make it feel ALL better, wouldn't it? :)

verf word: SQUIT, which isn't a naughty word, but sound like it should be. :)

LOL You have the best of ideas Polt. :-) Wish I had someone nearby to try it on.

Squit is a great word. We should make it commonplace somehow.

Oh your poor hand! I'm so sorry you took a tumble. I did that once while I was holding stuff and landed on the back of my hand (yeah, I know you're wondering how that's even possible) and I still have the scar from 12 year ago! Hopefully your owie's will heal without scarring.

The Willman sounds cute - yet not. lol Why would he keep letting the ex in? I'm with you - just odd.

I just have bruises today Tracy. I'm wondering if the one bruise on my left palm is where the corner of my ipod dug in because otherwise landing flat shouldn't have bruised it. I remember once as a teen tripping with an ice-cream in my hand. Never dropped it. LOL Seems our instinct to protect whatever we are holding is strong.

Well, granted, first his ex picked his lock and broke in, but later he would talk to him and let him in. Duh.

See what happens when us olds try to use too much newfangled technology?

You're a great mom. I think I would have handed Kristen a can of corn and called it a day.

That could be it Michelle. I'm getting too old for all the technology now.