Monday Mumbling ... What I've learned about myself reading m/m


Rather than focus on a genre or theme I like in m/m, this week got me thinking about things I've learned about myself by reading different types of books.

A) While in theory a May/December, March/November?, relationship doesn't bother me, hey more power to ya old dude, I've realized that at some point it squicks me out. When a 23 year old and a 50 year old hook up, permanently, I start thinking ... When boy A is my age *coughmid40scough*, his spouse will be ...... 75!!!!! Arrgghhhh *runs screaming visualizing being in a relationship with someone my Dad's age* I'm sure people can give me examples of cases where they know real-life people who have BTDT and were deliriously happy, but it's hard to enjoy a story when I keep thinking "Oh my god, oh my god, my Dad's age, oh my god". It would appear I'm not as tolerant as I thought I was on the age thing. 10-15 years I don't even blink, once it hits 20 I start to get jittery. (I should clarify, not that I would ever tell someone it's wrong, but it makes me doubt the long-term viability of the relationship.)
B)  On a similar theme, but not so much age related is the "My son/daughter's friend" theme. Ugh. That is so Letters to Penthouse. Ick. Dating someone the same age as your kid? Fine. A friend of your kid's, their age? Noooooo.

C) My need to create a conflict free zone in my life seems to spill over into fiction. I just read something where the one guy seemed to take great delight in poking his potential life-partner with a sharp stick. (not literally because that would be weird) But the Latino guy would get all pissed off and throw a hissy fit and be upset and the other guy found it just amusing as hell and regularly said/did stuff (or didn't say stuff) just to get a reaction. It reallllllly made me uncomfortable. It made me not like the stick poker. Why would you WANT to make someone you supposedly care about or love angry? I spent many years of my life running around trying to control the outside world so I wouldn't have to deal with an angry spouse. It just triggered all sorts of "stuff" inside that made me feel kind of ookey, even though I enjoyed the book on the whole. Obviously I still have issues. 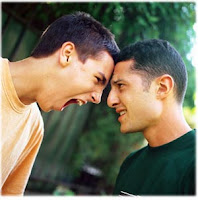 D) For years I have said, "I don't like scary books, I don't like horror, etc." When in reality I maybe do, a little bit. I like Dallas Coleman's books, because they are freaky and creepy but often not graphic. I know many people consider Jordan Castillo Prices' Wild Bill and Michael books to be horrorish (as opposed to whorish), but when some reviews would go "ooooh, it's really gross and freaky" I was kind of "eh". It was good, but I wasn't freaked out. Though as a rule I'd say I'm anti-slasher, anti-pain for fun (aka Saw movies). It needs a purpose I guess. Or maybe it was all those years of reading detective stories about serial killers that delighted in describing their crimes. I never considered that horror and yet I would never read a Stephen King because it's too scary. :-)
So what has reading (m/m, m/f, any genre really) taught you about yourself, your beliefs, inner secrets you don't reveal to the world. We'll keep it just between us. No one will ever know.
Posted by Tam at 6:43 AM

I enjoy May/December romances, but anything more than a 12 year age difference is not for me. When I was younger and read historical romance, it always icked me out when the heroine was 18 and the hero in his mid to upper 30's.

I'd say 12 years or less is more May/October. :-) In theory I don't have a problem with it, if a friend said they fell in love with someone that young I'd say go for it, and yet when I actually read about it, it squicks. Which probably makes NO sense whatsoever. :-)

Sometimes May/December romances really squick me out. Sometimes not so much. Depends on how it's written.

I'm not a big fan of horror, either. I can handle horror lite, but that's about it.

And I learned I really can't read incest, in any of its incarnations (twincest, etc). I hadn't even encountered it in my reading before m/m!

Maybe I'm not even sure what a horror book is. But I don't like scary movies, so I've always said I don't like horror books, but I do like suspense. Damn these genre definitions. :-)

My need to create a conflict free zone in my life seems to spill over into fiction.

I totally know what you mean! It just seems so juvenile when guys will bicker over every little thing in m/m fiction, but I think it's one of those "beloved" holdovers from fan fiction, which means it won't be going away anytime soon.

I know there are people who actually enjoy that in real life Val, but I'm just not one of them. However it's often something you can't tell before you get into the book. There's no tag "characters enjoy pushing each others hot buttons to ellicit screaming hissy fits for their own amusement". :-)

I've got a real life May/Dec here at my office (and M/M) and I must admit I totally doubt the longevity of their relationship even though they've gotten married and been good for years.

As for being a stick poker, I love reading about that... as long as it isn't malicious.

Scary I can do sometimes... if you mix it with sex. Like Anita Blake *bats eyelashes innocently*

I would always hope I'm wrong about the May/December, I want everyone to live HEA, but I don't know anyone personally who it's worked for.Yet. Maybe now that I'm getting old my friends my age will start hooking up with young things. LOL

Even when it's meant to be humorous and the pokee doesn't seem to hold a grudge it still bothers me but I know that's my own issues coming out.

Maybe that's why I like JCP's horror, it's mixed with the smexin'. ;-)

Let's see:
15-20 years is really my limit in the whole relationship age different thing. I deal with it better in m/m than m/f though. And the whole older woman, younger man thing - no way in hell. I find those stories very hard to believe.

HATE the stick poker stories. Can't stand them - they make me tense and I don't want that kinds of tension in my romance books. There are too many RL crappy things that can happen - why add to it?

Friend of the son/daughter - eewwwwwwwww! No. Just...no.

Horror - IDK, I just don't read that much - I think I can take horror lite.

Dude - is your hottie of the day like 12 years old? lol

Yeah, if I was in a relationship where you found it amusing to make me angry and stressed? Well, it's been nice knowing you.

The rule of thumb I have always heard is half half your age plus seven.

I don't generally read these types of books so I can't say it's taught me anything. I CAN however say that having a relationship (or at least sex) with someone who's 20 years younger is not only a blast, but an ego boost, and a helluva lot of fun! :)

LOL I knew you could give us the insider's view hon. I guess I have a prejudiced difference between having fun with someone that young, and getting married and expecting to be together 4evah.

Oh Tam, I NEVER planned on spending forever with Kris. Or Troy. Or TC. or Angel. Or the others. Just several nights. :)

And I've NEVER seen abs on a 12 year old like that guy in the photo has!

Oh, let me chime in on the reverse of Polt's statement.

Smexin' it up with a lover twice my age - a freakin' blast! Knowledge is power. ;) And the adoration, well it is heady to know you are fulfilling a fantasy for the man.

Hmmm. Good point Anon. Anyway you cut it, if everyone is having fun and it's all legal, then I say go for it and have a good time. :-)

I've seen a May/December relationship fail really spectacularly. But that could have been because the guy was a total jerk.

Yeah, being a jerk tends to have a negative effect on the relationship. :-) I'm sure some work, some don't, like those of any age gap. Maybe they are just less common so stand out for scrutiny.