So this past weekend the amazing Craig, of Puntabulous fame, held a pool party at his house in Long Island for all of us dancing monkeys loyal blog followers. We got together and laughed and talked and drank and ate and ate and ate some more. So I thought, what could I, a long-time follower of Puntabulous, contribute to the party that be unique and fun for the whole gang? I know! I'll take that Vegemite in the cupboard that the adorable Kris sent me and let everyone taste that delicious delicacy from the land down under. Who could resist that at the party? Heh. So after several blueberry gin lemonades (Vuboq is my hero) and some beer and enough food to feed a small Asian family for a week, I pulled out the Vegemite for a little tasting. 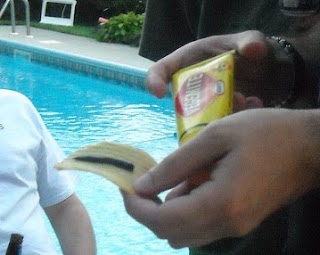 So how does one serve Vegemite at a pool party? No, not on toast with a layer of melted butter, but on a lovely ripple potato chip (or crisp depending on where you live). Yeah, yeah, I know, sacrilege, but it was the best we could do without putting any effort into it. 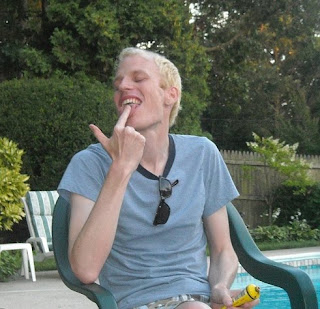 Vuboq, of the blueberry gin fame, started by being totally brave and licking it straight off his finger and yes, the "brown stuff on your finger" jokes ensued, but he kind of liked it. Wacky guy. His enthusiastic response to the culinary delight inspired others to take the plunge. 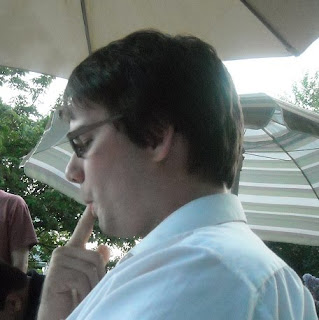 Nathan had already had the Vegemite on toast experience at my house, where admittedly he used the "two bite rule" on himself, and then wisely tossed the rest in the trash. However, following Vuboq's lead he used the finger application directly to the taste buds method and declared it " not bad." Of course now the other guests were clamouring for a taste. 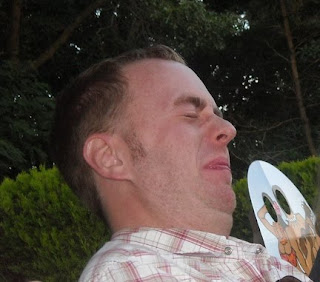 Adam was next. Ummm. Okay, no erotically charged licking of the finger this time around. He did manage to swallow though. Go Adam. 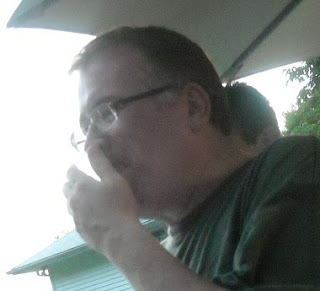 Despite Adam's response, Polt willingly stepped up to the plate to give it a try. Being told the best way is to put the chip Vegemite side down on your tongue he took the plunge and ... well, he too managed to swallow. Gotta love the manly men who can keep Vegemite down. However experience at swallowing probably helps. *badum ching* 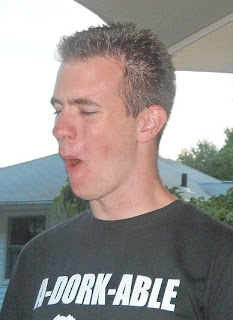 Not to be outdone in the manly department, our amazing host took a turn. Ummm. He let me stay at the party despite this. Now you know why I love him. 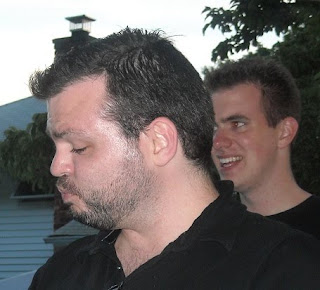 Still, despite the response of our able host, Mikey was not about to let the others get the better of him and manned up to have a taste. Oh boy. He was still trying to claw the taste off his tongue a few beers later. Way to take one for the team Hon. You did good. 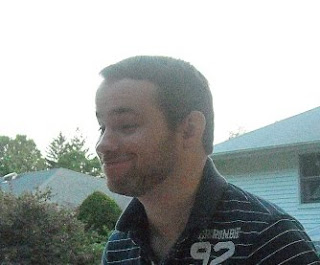 Chris was next and to be honest, I'm not sure if he really liked it or is trying not to hurl in this picture. I'm thinking the latter. 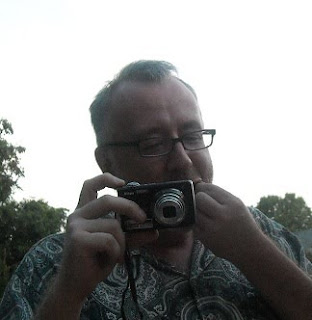 Justin volunteered next, claiming to have eaten Marmite, hence Vegemite was no big deal. Never letting go if his camera which was glued to his hand with a constant clicking motion of the finger for 8 hours, he declared it quite unlike Marmite but could not proclaim a clear winner in that contest. 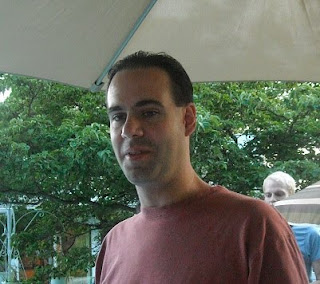 After all of that FDot still gave it a shot and as you can see, survived the event with nary a scar. But then he's from a town in NY that is nearly impossible for Canadians to pronounce so it's understandable.

So there you have it. Vegemite was definitely an experience that contributed to the party atmosphere. I may have missed a few people here who also tried it, the kidlet was madly snapping pictures while we laughed, winced, groaned and stared in wonder at the many who chose to walk on the Aussie wild side Saturday afternoon.

Besides Vegemite the party was a blast and hopefully tomorrow or Wednesday I'll get some more pics up. We're in Brooklyn tonight, and we got together with Diane of Good Reads and she showed us around and we went for Turkish food and had a great time. The next couple of days we'll spend in the city. Prepare for whining of sore feet on my behalf. :-)
Posted by Tam at 9:12 PM

Vegemite is teh awesome! What the hell is wrong with some of your friends?? And comparing it to Marmite?! That's just sick.

What's so hard to pronounce about Mamaroneck? Plus, I had my taste buds surgically removed years ago.

You were the brave one Vuboq. An heroic effort put forth.

See Kris? Vuboq's on your side. :-) The Marmite thing you'll have to take up with Justin, I'm sure you can take him because he'll be distracted taking your picture and won't see the arse-kicking coming.

It looks like Mama Roneck, some kind of wacky pizza place. :-P

Surgical removal of the taste buds would be my recommendation for those taking up Vegemite as a serious hobby.

What a brave bunch! I've never had vegemite, but I've heard some horror stories . . .

Well, it was pretty bad but it wasn't the worst tasting thing I've ever had in my mouth. :D

I've smelled Vegemite and that was enough for me!

Well Eyre, I'm sure it will be an experience you'll always remember. Seriously, like FOREVER. LOL

Ah Polt, I knew I could count on you. LOL

Ha! I'm bring it to San Francisco Chris. You just wait, enough GF beer and you'll be trying it on a ripple chip too. LOL

Um. It can't possibly be gluten-free, can it?

Chris: Since it's just hydrolysed yeast, I do believe it's GF.

Tam: After you left here, I realised you'd never whipped the Vegemite out. I feel cheated. Did you at least point out to Adam that it's vegan?

You didn't need to be helpful there, Mel. ;p

LOL Well Adam tried it not knowing if it was vegan or not Mel. He's truly brave.

Too bad Chris. You're doomed now.

Vegemite is evil. You are slightly less evil for bringing it into my house.

Okay, yeah, so it was really damn funny too. Glad you came this weekend!

Whew, less evil than Vegemite. I am so happy you invited us, it was great fun, Vegemite and all. :-)

Ewww I think it was so gross that my neck attempted to swallow my face. I need botox!

Vegemite looks evil, sounds evil and tastes like something that came out of the devil's diseased fourth penis

Finally, one aspect of the party I don't feel bad about missing! I've tried vegemite many years ago. I remember it being an unpleasant experience. Perhaps if I had made it this time, the company would have improved the experience.

Haha - great post! A fellow blogger recently sent me vegemite and I made my family try it...let's just say I don't think we'll be serving it for breakfast any time soon!

I think it might have gone better if you'd forced everyone to try Nutella. ;)

The good company I'm sure helped John, that and the copious quantities of alcohol that had been consumed.

I'm assuming it's an "acquired" taste Patti. I just see no need to acquire it. :-)

I'd have had to wrestle the jar of Nutella away from them Chris, and the pictures would have been way less amusing. :-)

Maybe. Or maybe the "using Nutella as edible body paint" portion of the event would've started. :)

As I read I am thinking of all these memories you are making... A lifetime of treasures...

and the pic's weren't bad either...

Thank you for sparing us the vomit photos, Tam.

You've convinced me never to eat any food with a name that ends in "ite."

It was great fun EH. Something surely we'll all remember.

Thanks Jordan, we had so much fun all weekend.

I was gonna do it, but it was dark outside when I was asked and I don't like taking photos with flash. The flash is not kind to me!

What is vegemite? An Australian version of Spam?

Ha. If only Val. It's a fermented yeast paste. It looks and even smells a lot like gelatinous soy sauce. It's dark brown and paste like, or maybe kind of like anchovy paste consistency. But it squeezes out of the tube nicely.

I think the vegemite was the hit of the party. The reaction shots are hilarious. And I'm still not exactly sure what Justin looks like because his camera was in front of his face the whole time...

Maybe that IS what he looks like Michelle. We'll never know. :-)

Somehow I missed this post -- I thought the next post was the first one on the puntabumeetup.

Ok. So. First off. FIIIINNE I bow to the overwhelming consensus that I was a complete and utter BOOR for my OCD photography :P I am always OCD with the camera. And a poor editor. I realize after having seen everybody else's pictures, that mine will all prove to be superfluous.

I have two things to say about vegemite and marmite. Actually I wish I had mentioned the second one at the party.

a) I thought vegemite tasted almost IDENTICAL to marmite. This surprised me. I could have sworn trying vegemite like 25 years ago and I could have sworn it was yellow, not black, and that it was more like vomit. This tasted and looked pretty much almost exactly the same as marmite. I liked it, because I like marmite!

b) Lisa has always said that "Marmite" sounds like a disease your pet would get. Like you bring your dog or cat to the vet and he says "I'm sorry, ma'am, but your dog has a terrible case of marmites."

I even had the idea once of making a youtube video where somebody in a white lab coat makes it look like they are putting a caviar spoon in a cats' ears and then depositing the result in a jar of marmite. Would have a good "eww" factor and would also fit with most people's attitude about the stuff.

I suspect just about everybody at the puntabupoolparty would have had the same attitude about vegemite :)

I love Vegemite and declare it is THE REASON I haven't had a cold or flu all year (when I started this breakfast addition). Love it. Since it's kinda salty all on its own, a chip may have been overkill. LOL.

Sigh. Salty Mia? Salty I could handle. It was the disgustingness that put me over the edge. :-) But hey, if it works for you, more power to ya. LOL

Are you tired of searching for bitcoin faucets?
Triple your claiming speed with this amazing BTC FAUCET ROTATOR.

Did you consider trading with the best Bitcoin exchange company - YoBit.