The final vacation installment. Yay! (I'm sure you're saying.)

So last Sunday, after some panic with lost car keys, we left Long Island and headed to Brooklyn because hotels are waaaaay cheaper there. We took the subway into the city and our first stop was Kleinfeld's. Many of you probably have no idea what this is, but it's a bridal shop that is featured on the TLC show Say Yes to the Dress. We watch religiously, so we made the pilgrimage. After taking pictures I said "We're going in." So we strolled into the small lobby and pretended we were waiting for someone. I got a business card for Kristen and we waited and watched. We saw them filming with one of the consultants and we saw the owner. Then consultants started coming to fetch their clients and ... OMG, Keisha walked in. Okay, that means even less to any of you, but she is my favourite consultant on the show. I wanted to take her picture but Kristen said that would be creepy, so I didn't, but I was almost squeeing out loud. So that was our brush with greatness in NYC. :-)

We did some shopping that day, and then I read that there was supposed to be a LGBT bookstore down by Stonewall so we hopped the subway down there. No bookstore but we took a pic of the Stonewall Inn where the LGBT rights movement really got kick started. Then our feet hurt so badly, we ate and went back to the hotel.

The next day we ran down to Times Square and got tickets for a matinee. We didn't have to wait long as we decided we wanted a play and got tickets for A Perfect Crime which is off-Broadway and tickets were $31. Cheap. It was kind of freaky because it was really small and we were in the second row. It was like being IN the play. It was good though and we enjoyed it. Then we went to Canal Street (Chinatown) and I was not impressed. I've been to Chinatown in Montreal, Vancouver and London and there are shops and groceries with weird Chinese foods and products but this was nothing but NYC tourist garbage run by Chinese people. Where do the Chinese people shop? Oh and lots of people muttering "Louis Vuiton, Channel jewellery" in your ear to take you to a magical place with illegal knockoffs. We ended up walking up Broadway and doing more shopping and then back for Chinese food and home again.

That was our last day in NYC. It was nice as we did some things we've not done before when we were there. 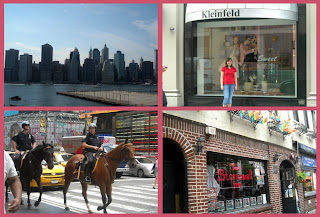 Thursday we were off to Philadelphia, over another freaking gigantic bridge. Arrgghhh. Not only was it huge, but I had to pay an $11 toll on the other side. Rip off. Anyway, we made it to Philly and walked over, in the extreme heat and humidity, to see the Liberty Bell. I still don't get really why it's so important, but anyway, we saw it. Then we wandered around and saw some actors reading the Declaration of Independence. I wanted to point out that when it was written neither the black guy nor the woman had any rights, but I'm not even American so I kept my mouth shut.

Friday we wanted to see the Amish and wanted to go to Intercourse, PA. Yes, I only wanted to go because of the name. Shut up. But there was a road closure and we couldn't find the detour, arrgghh. So no Intercourse for me. :-P We did find another place further down where we went on a buggy ride and got to go to a real Amish farm and see real Amish people, who never seem to wear shoes. We bought some jam and that's about it. Then I was tired of driving so we came back to Philadelphia, went out for a Philly Cheese-steak (meh) and plotted my trip home.

We are leaving this morning, whenever we get out of the hotel and it's supposed to take about 8 hours, which means likely closer to 9, but we'll be home tomorrow night and I have a day to recover before heading back to work. 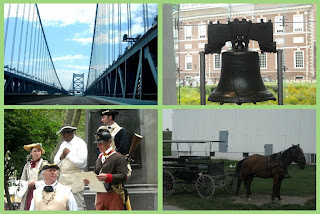 It was a fun time but I'm ready to be home. The best part was seeing friends and the weekend in Long Island will long be remembered as the best part.
Posted by Tam at 10:26 AM

Sounds like you guys had a great time on the last leg of your journey. Hope the drive home is stress free and safe. :)

I'm not really sure why the Liberty Bell's important either, but it got cracked for our freedom, so just shut up and be impressed! :)

Sounds like a fun time (except for the no Intercourse for you...teehee....). Have a safe trip north and I'll seeya next trip in the area!!!

I wanted to point out that when it was written neither the black guy nor the woman had any rights, but I'm not even American so I kept my mouth shut.

Too funny! It sounds like you had a great time. :)

"I wanted to point out that when it was written neither the black guy nor the woman had any rights, but I'm not even American so I kept my mouth shut."

Oh, the scenes I have caused over such things. *nostalgic sighs*

Safe travels home to you, sweet.

I'm so glad all you ferners know when to keep your yaps shut. God knows this country is already brimming over with bigmouths. :D :D :D

Too bad you couldn't take a photo of the Intercourse highway sign. You could've made a bitchin' banner out of that, hon!

Hey, did you ask any young Amish men about their sex lives? Or orientation? Heh-heh.

We did have a fun time Lily. Made it home without incident except for some traffic congestion near Philly, which seems to be the norm for there. 8.75 hours, pretty good.

I just didn't get the bell thing Polt. It didn't ring on July 4 or anything, but whatever, it has a major crack so is worthy of us filing by and having our hotel room key de-magnetized by the metal detectors. :-)

Yeah, I wasn't sure exactly what they were talking about so I figured best to keep my mouth shut Val. :-) We had a good time but I'm glad to be home.

But you're a shit disturber Kris. :-D

I'm a good guest KZ. ;-) There was no sign on the highway and the only Amish guy I talked to was about 65 and was trying to sell me quilts. They only go to school until Grade 8 and then they never shave after they get married, except the mustache. Ewwww. I did see the owner of the farm we visited though. Oh and they don't seem partial to wearing shoes. LOL Oh well, next time maybe I'll get "lucky".

Thanks Chris. I wasn't even in the door and we saw the cats had about 5 mouthfuls of food left, so back in the car to the store. Sigh. Home now and I'm not moving until I have to. :-)

Not sure the cats are happy or pissed but Vanessa has plunked herself next to me on the couch so I guess she's happy. Max made his displeasure known.

I love that I can vacation vicariously through you!

You'll have to give it a go Eyre. Great fun to see all the states. Huh, I just counted and in my life I've been in 25 states. Sometimes only passing through for a few miles but technically 50%.

oh man! You were in my town and I didn't even know it.
Which would be creepy because I pretty much just stalk your blog without commenting, so if I was just hanging out at the Bell (pointless, you're right) when you were there, you'd probably just walk past.

Anyway. I hope you at least got some good lunch while you were here.

LOL That would be slightly creepy Lora. Comment more often, we'd love to get to know you. :-)

Did I get good lunch? I think so. We ate so much food in the last two weeks I'm still in a food coma. I have to admit I was not overly impressed with the Philly Cheesesteak I had. Too salty. Maybe it was where we had it.

Long Island was the high point of our vacation, too : ).

Stuff like going to Kleinfeld's or Intercourse are things I like to do when traveling. Much more interesting than an old cracked bell (in my opinion).

We had a good time Michelle and the whole bell thing escapes me, but hey, I can say I saw it. :-)