Back to Work and Reading

So that graphic pretty much sums up being back to work is like after an amazing vacation. :-) Ah well, rent must be paid, food must be bought. I've done some reading since I got back so thought I'd do a quick update while I have some lunch.

Miles has been forced to move back to Minnesota after losing his job in Atlanta, and his boyfriend. He HATES his life. He's working in his friend's pawn shopping, living in their trailer and feeling quite sorry for himself. (Not that I blamed him really, my nightmare come to life, having to move back home. I'd work at McDonald's first.) Anyway, he feels himself drawn to the woods and weird things start to happen to him. Suddenly he goes out for a walk and ends up in the woods being chased by a monster and rescued by a beautiful fey who tries to seduce him. It's quite a complicated story and Miles is caught between the two worlds. The fey wants to use him to set himself free from the bondage he's in, and the monster just wants him. He's torn, as the fey is everything he ever imagined, but the beast draws him. During this time Miles figures maybe his life wasn't all it was cracked up to be and he's just a wee bit selfish and feeling entitled. It's quite the story with monsters and fey and silver and flutes and Miles just wanting to do the right thing. I really enjoyed it and stayed up waaaaay too late the night before my first day back at work to finish it. I was going to stop, really I was but .... I have no self-control. The ending was a bit too perfect perhaps and a bit schmoopy as I think Jen said in her review, but that's such a small part that I think even if you don't like too much sugar, the rest of the book definitely isn't and it's worth a read. 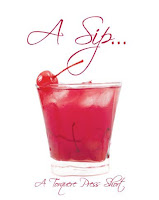 Rufus is a space bounty hunter who is determined to bring in Jobi who steals state secrets and sells them to the highest bidder. When Jobi's ship sends out a distress call he comes to the rescue. After he's distracted by a smoking hot kiss, Jobi escapes. He's even more determined to find him and they set out to do so. He does find him although Jobi gets the jump on him, the tables are turned on Jobi and consequences must be faced. It was an interesting concept but something about this just didn't grab me. Maybe I didn't quite get the attraction between the two guys being that it happened so suddenly. I'm not sure. It's not a bad story and the writing is fine, it just didn't click for me. I'm sure it works well for others and if you like sci-fi it would be worth a quick read.

This is book 3 in the St. Nacho's series. Jacob has always been in volatile relationships. After his current one gets REALLY bad, he kicks out the boyfriend and takes his battered and beaten self onto the bus to his brother's. It's during swine flu panic and his cough causes the bus driver to abandon him in St. Nacho's. He checks into the motel but almost dies and is saved by paramedic JT. He's forced to stick around for the week and JT is determined to help him by setting him up with a domestic abuse survivors group. He's not impressed and is getting a very weird vibe from JT who seems to blow hot and cold but is obviously dating women. He also meets fireman Cam who would love to date him but he can't get JT out of his head and he hooks up with the pie ladies to help them out. I really enjoyed this although I wanted to smack JT more than once and Jacob too for accepting the dregs he was handed, but the long term effects on people from living with abuse their whole lives I thought was handled nicely and Jacob and JT are both Jewish so there was quite a bit of reference to JT's beliefs which was interesting. You don't see much of the other characters from St. Nacho's just Ken a bit and a few mentions (except for Jordan's Mom, Mary Catherine) but I really enjoyed it and seeing Jacob face up to his past and why he picked the men he did. You also get to meet his older brother Dan who is set to be the star of the next book (I hope) with Cam. On the whole an excellent addition to the St. Nacho's group with lots of interesting secondary characters such as Cam and the pie ladies. For fans of the series a must. Oh, if you haven't read the others it won't matter all that much, a few things will be clearer if you have, but it could be read as a stand-alone, however they are all so good I suggest you start at the beginning with St. Nacho's.
Posted by Tam at 12:39 PM

I enjoyed both the long books and haven't read the short. It sounds OK, and I've enjoyed stories by the author before in anthologies, so maybe I'll give it a go when I'm in the mood for a quickie.

Sorry you're having to go back to work. You're right, it sucks.

I know. What's the world coming to Jen. LOL I like to mix things up just to keep you guys guessing. :-)

I don't remember reading anything by that author before but I'm not a huge sci-fi fan so that may have been part of the lack of appeal for me.

I have a flute but there is absolutely nothing magical about it.

Sorry that work sucks.. suck it back! :D What do you mean that doesn't work?!

Mmm. But Miles' flute was magic. LOL And no that's not a euphamism for his dick. LOL

I have a fridge right outside my office door. I should fill it with beer. By 4:30 I'd be happy happy.

LOL about the fridge, Tam!

I read the two longer books and agree. :) Can you believe I'm trying to read some of my longer books, too? Why do fear them so?

It's because for me they end up causing me to be sleep deprived Chris. Everytime I start one I end up until after 1:00 because I just have "a little bit more to go". Sigh. I'm not good at delayed gratification.

I'm pretty good (usually...) at being able to put the book down on weeknights - lack of sleep is a migraine trigger for me, so I try to restrict the staying up to Friday and Saturday night when I can sleep in!

Lack of sleep is only a trigger for whininess and bitchiness for me. Which could partially explain my attitude problem today.

The ZAM book is the only one I've read.

Tam, I hope tomorrow is better for you.

Thanks Eyre. Not sure what's going on. I was back at work for two days and my boss NEVER came by my office once to say hi, how was your vacation, nothing. I stopped by her office 3 times the first day and she wasn't there so I gave up. Not sure if I'm just feeling invisible and sorry for myself (honest to god, I could have stayed home and NO ONE would have noticed or tried to find me), post-vacation depression or what. Blah.

Did you have anything to do, or were you basically on in-office vacation?

Tam, maybe your boss is really busy/stressed about something.

You're too awesome to be invisible at work.

Maybe it is that post-vacation depression. I know that I always feel down when the fun ends. Add in being tired, and the world can look pretty grim.

I read through and filed all my e-mails from when I was away. Answered a few. Made my Halifax travel plans. Had a conference call today, set up some meetings for next week but not 15 hours of work. Hence this post. :-\

Maybe Eyre. I don't know. I'll get over it. She's gone on vacation now for a month so maybe that was it. Whatever. (imagine one of your students doing the eye roll thing LOL)

I won Miles and the Magic Flute over at Chris's site (thanks again Chris and Heidi) but still haven't read it. I've got to move it up my TBR!!

ZAM's book sounds really good. It's on my buy list so eventually I'll get to it as well.

Hope the rest of your week improves!

They are both good books Lily. I think you'll enjoy them and winning is always good. Yay for winning free books. :-)