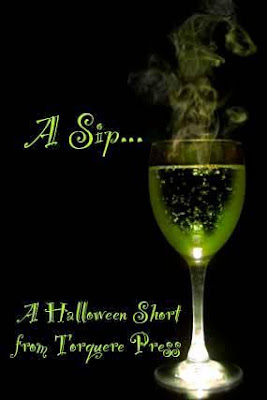 Torquere Press released a bunch of Halloween shorts this past week. I know, I know. Halloween is over but I'm a sucker for not only shorts, but Halloween shorts in particular. So every now and then, (but I'll stop before Christmas, really LOL) I'll do a few.

It's been an up and down week at work. Thankfully a short week and next Thursday I am off for our Remembrance Day (but the kid has school, it's weird). It's been cold and wet the last two days which hasn't helped my mood, but on the upside, my kidlet got two awards at the school last night. She got Over 80% Honour Roll and Very Good Attendance. (We're not sure exactly what qualifies as "very good" but she'll take it. LOL) It was a nice ceremony for all the kids.

So let's get spooky.

Dance of the Zombies by Lorne Rodman (24 pages)
Donny is at a friend's Halloween party when he runs into another zombie, Perry. They start dancing and have a fun, but Donny knows he's hit it lucky when he finds out Perry is a fire fighter. Seems they both love zombie movies and have the same lame sense of zombie humour. This is just a little story of two guys who meet and think maybe there is something possible for them as a couple, with an abundance of goofy lame zombie humour. You really got the sense that they are total geeky horror nerds, perfect for each other. This line says it all,

Great when you are in the mood for something light and fun.

Haunting 101 by Amylea Lyn (23 pages)
Colby is a bit annoyed to find himself dead at the ripe old age of 19, and worse, he has to go to ghost school to learn how to haunt someone. He gets assigned Devon, sort of like an internship, although Devon's last intern didn't do so well. They get off to a rough start but soon Colby is getting the hang of this haunting thing, getting to know the real Devon, and falling for his charms. Maybe dying a virgin doesn't mean he's lost his chance. Okay, I laughed out loud while reading this. Colby is so funny and self-deprecating, but it's touching when Devon tell his story. The descriptions of the other people in class were funny. If you need a quick short to make you smile, I'd say this is the ticket.

Love Between Friends by Kiernan Kelly (23 pages)
This starts with someone telling you a story as you buy him a drink. He claims to be a monster and then as he tells his story, you realize he is the Frankenstein monster and his lover is Dracula. They met back in the time of Jack the Ripper where they both had decided to make amends for their previous bad behaviour, and started hunting bad guys who prey on humans. It was quite different and the tone is that of a storyteller so you feel a bit removed. However, I really enjoyed the affection between Vlad who is physically perfect, and Adam who is ... well, a monster, but Vlad didn't see that, he saw someone he loved. An interesting twist on two legends come together as one.

Precious Possession by Alexi Silversmith (29 pages)
Ben and Fletcher are total opposites, but fall in love, get married and buy their first house together. Sure they say it's haunted, but, phhhhhtttt. Yeah right. Things don't go well, Fletcher loses his job and soon is putting all his effort into starting his own business, and carpenter Ben gets a cute twinky assistant. Before they know it, resentment has built and a year later things are on the skids. Suddenly a female ghost offers to help Ben fix what has been mostly his fault in the relationship. I liked the relationship part because OMG, BTDT, exactly. Except the starting a business part. I won't say how the ghost helped them get past the hurt and resentment to avoid a spoiler, but it make me a bit uncomfortable. Except for that part, I thought it was a very realistic relationship story, whether gay or straight couples.

Reflection by Jamie Lowe (14 pages)
Alexander is an antiques dealer who, when cleaning up an old mirror his partner bought, found something surprising. There is a boy trapped in the mirror and they get to know each other and while they can't touch, they can both pleasure themselves while watching and fall in love. Yes, Alexander love Elias, but I found him very selfish and not very sympathetic. He kept Elias locked up in a room, he didn't want to even give him a clock because he liked the idea that Elias sat there all day just waiting for him. I was like "Jeez, give the guy a TV to watch or something" but Alexander didn't even own a TV. I think because I didn't find Alexander very sympathetic I didn't really feel his pain at not being able to touch or be with Elias in the flesh. A different concept though that was well done, I just didn't connect.
Posted by Tam at 6:12 AM

A couple of these sound really good. I'll read Halloween stories at any time of the year :).

Not sure about the ghost ones tho, I just never seem to be able to connect with ghost stories. Not sure why, other than perhaps my scepticism about such things.

The zombie one sounds good and I like nerdy guys.

I'm not looking forward to returning to work Monday...

I wonder why they didn't release the Halloween shorts earlier in October? I'm not even tempted by them right now!

I'm like you Jen, I like Halloween year around. The guys in the Zombie story kind of reminded me of some of the adorkable guys I hang with on-line. Goofy humor but fun.

Ghosts and me are also iffy for the same reason I think. Although I think it's the human/ghost interaction I find less appealing, the second one which was set entirely on the ghostly plane was very funny and so a different type to Precious Possession.

Ugh. I don't blame you Chris. It's so hard to go back after vacation.

I'm not sure why they weren't released before. I suppose that would have made more sense.

Congrats to Kristen on her awards!

It's been wet and cool here as well although I'm sure not as bad over there. Hope next week is better for you.

These sound good. More for the endless wish list. :D

Thanks Lily. It's been cool all over I think (except LA) as my friend in Mobile, AL was dealing with a frost warning. Hope you are feeling better these days.

Although here it's going to be nearly 60F (15.6C) today, which is pretty warm for November in MN.

Ok - I've discovered that I can't comment on your blog AT ALL at work! I'm so sad. I have no idea what the problem is - but I'm working on trying to solve it! *sniff*

So all of these sound right up my alley except that last one - yuk. I think I'm gonna have to go buy me some shorts - uh, not the kind you wear. :)

That's so weird Tracy. Can you comment on other Blogger blogs? They were mostly pretty good. And you live in California, you probably do wear shorts in November. LOL

It's been damn chilly here! The wind does it. Actually the wind has stopped now that Kris left hmmmm. lol

Actually it's any of the blogs with imbedded comments so not just you . It used to be that I could do it from IE but now I can't do that either. My firefox is giving me problems with the veri words too. On the blogs that are formatted with pop out comments the veri word doesn't show up until I log in like 3 times and then sometimes I lose the comment. I think I'm gonna have to delete firefox and re-install. Of course that doesn't explain IE. *sigh* I have no idea since I'm not blocked by employers or anything. IDK! lol Frustrating.

Work computers make no sense sometimes. Some days I can't read Twitter at all, I just get a blank page, then it works, then it doesn't. We have to use IE at work and I've not had problems. Hope you can get it working.