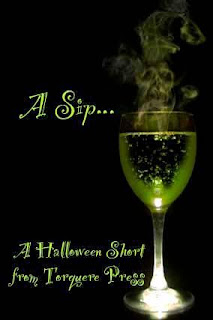 Read a few more Halloween stories this week. All four are from Torquere Press again. (Oops, posted early and I'm too lazy to delete and reset - if you're reading this Friday, pretend it's Saturday.)

The Taste of Magick by Riley Shane (29 pages)
Jason is a witch who was raised in a fairly sheltered life. He HATES Halloween and all the hoopla, but his boyfriend of two years Travis runs a costume shop and loves it all. Jason is a Halloween Scrooge. However he knows that's not the only problem. He's been unable to tell Travis he loves him, even though he does, or do things like share his key with him. Something is holding him back and he knows if he doesn't change his ways, Travis is going to move on. He goes to his sister for advice on how to get past the block. I did enjoy this but there was more I wanted to know. Why was it so hard for him? There is a sentence or two by his sister about having distant parents but otherwise I'm not sure what is going on. Was it just parents? Hurt by an ex? I just felt I wanted more.

The Cat’s Meow by Sean Michael (29 pages)
Maks receives an unexpected delivery, a statue of a man turning into a tiger. Just so happens Maks is a were-tiger and he's instantly attracted to the delivery man, Deke. His cat goes into full on "want" mode and they have a little interlude and Deke figures that's it. However he's the sculptor, and his muse seems to have left him so he goes to a club and runs into Maks. Before long they are humping in the bathroom and head back to Deke's studio. As the story goes you assume Deke doesn't know about weres and is oblivious, but I have to say if the guy I was with was making the weird cat sounds Maks was making, I'd be seriously concerned for his respiratory health or his sanity. LOL However you find out perhaps more is known on both sides than was revealed on the surface. It's typical Sean Michael, hot aggressive animalistic sex, lots of growling and purring and chuffing and whatever else tigers do. It's not related to Halloween exactly, except to have a shifter in it.

Stag Party by Rob Rosen (14 pages)
Nameless guy (who shall henceforth be known as Bob) has gone to Transylvania to seek the elusive snow wolf. His Jeep breaks down during a snow storm and 3 men "rescue" him and invite him to a stag party. Turns out they are vampires and he ends up in a castle full of naked vamps devouring a stag. When Bob tries to leave they tell him he's next, but first he gets a good fuck from the head vamp. To be honest he takes his news pretty well and after some public buttsecks, asks for one last wish before he's devoured by the vamps. He wants to see the snow wolf. This falls much more into the genre of erotic horror than romance and I have to say I was wondering where the story was going and was surprised by the ending. For those who like something a bit off the beaten romance path and enjoy horror combined with your sex I think it would be right up your alley.

Dwyer is a werewolf who drives for a car dealership delivering clients to their offices. Due to a recall he's very busy although he's getting antsy as the full moon and Halloween are drawing near. His last client Nelson really does it for him and he manages to arrange to pick him up after work and asks him out. They end up at a motel and agree to meet again on Friday. During that date, an elderly couple is attacked and to save them, Dwyer shifts in front of Nelson. Ooops. He then has to explain to Nelson that he's his mate. He says that if they mate properly under a full moon Nelson would become a wolf too. And what is Nelson's reaction? Well first he fucks his brains out then promptly says let's do it. Ack! He's the Britney Spears of the shifter set. Marrying the guy within days. This just moved too fast for me. Up until he basically said "let's mate tonight" I was enjoying it, but while even if he wasn't too freaked by him being a werewolf (and hey, I'd like to think I'd be open if I meet a werecat in Chicago in December - thank you for the pic Jordan), I'm not going mating under the trees that weekend. If it had been dragged out, him being more cautious, I would have enjoyed it more. But he was ready to quit his job, move to the country, find a pack, full on acceptance within hours. Too fast for me. I enjoyed the writing style though and would definitely try the author again.
Posted by Tam at 9:15 PM

Hmmmm, not really feeling the love for any of these. I did go and buy the Lorne Rodman short you recommended last week, but I think I'll skip these.

I have to say they weren't my faves Jen. Not horrible or anything, just they all had a little element or two that lowered my regard.

I'm with Jenre - not really feeling the love with these.

Ack! He's the Britney Spears of the shifter set. Marrying the guy within days.
Thank you for the great laugh!

You're welcome Tracy. The last one was just too fast for me.

I wouldn't rush out and get them Lily but I know you are a SM fan so you'll enjoy the little short. It's got lots of hot growly sex which is fun when you're in the mood.

Dwyer is a werewolf who drives for a car dealership delivering clients to their offices.

I love it when werewolves have real jobs! :)

LOL Yeah, it's kind of "normalizing" Val. Apparently Dwyer has enough money he doesn't HAVE to work (he's amassed it over the years) but he has nothing better to do so he works for the dealership. There were very good parts to that book, aspects that I quite enjoyed, it just went too fast once the secret was revealed for me.

Nothing's calling my name very loudly, but there IS a TQ sale this weekend...

Uh oh. LOL Check last weeks spookies, I think they were a little better. Although for SM fans Cat's Meow was well done.

I'm just curious: did the werecat spray the guy he wanted? (Nothin' says lovin' like the smell of cat urine!)

What he was spraying KZ wasn't urine. But he marked him. LOL

Thank you for taking the time to read and review "The Taste of Magick."

I've read The Taste of Magick but haven't found time to get to any others from the line up. I felt that for the word limit, which we much remember.. it is a short story, that the world was very well done and the relationship was believable. I thought it was a very good 'sip' and one that left me wanting more in a good way.
It's good to see other m/m reviewers in the blogsphere.

I think that was it Nicole, I just wanted more. And that's always a good thing. When you just don't care to know anything more it's not so good. :-) A word count is always limiting.

There are quite a few of us reviewing m/m, we're growing anyay.