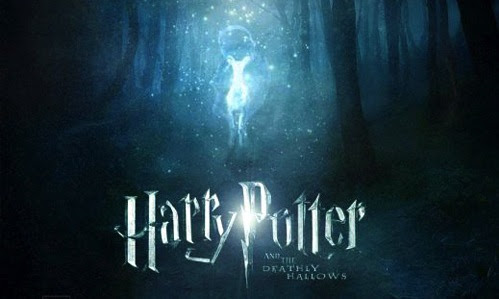 Last night my daughter and I went to see the latest Harry Potter. I have to say the theatre was very nice, it's new in our multi-plex and has a bigger screen and really comfy rocking chairs and you get assigned seats so no stampede to get there early or get good seats. We also bought them on-line so breezed right in past the lines of people waiting for tickets (Tuesday is cheap movie night here so always busy).

Anyway, those of you that follow the stories know how it goes. After Dumbledore's death, Harry, Ron and Hermione set out to find and destroy the horcruxes while Voldemort causes mayhem generally. How was it? Very good, although it leaves you at a cliff hanger which is going to make waiting months and months rather frustrating, but I think it ended in a proper spot.

It's very dark, in the sense this is not the movie you take a 6 year old who dresses up like Harry Potter to. A couple of seriously intense scenes that had me scrunching my eyes shut and cringing. There is some humour too to lighten the mood a bit, but it's pretty subtle. This movie really focuses on the three main characters along with Voldemort. If your looking for that ensemble cast of teachers and students or even the Order of the Phoenix gang, it's not there. Of the more popular well-known characters, you see:
This is a movie about the bad guys finally getting their chance, so they are all over the place doing evil things. There were some great special effects, the battle scenes in the air were great and when Hermione tells the story of the three brothers there is a use of animation as she speaks that I was really impressed with. Kind of old school shadow puppets, but not quite. Anyway, it was very effective I thought. I forgot to mention the scenery. I don't know where they filmed or if it's all sound stage or CGI, but it was VERY impressive much of it.

So for Potter fans it's a must of course. Definitely worth seeing on the big screen and I would even say worth springing for the extra money to pay for 3-D if it's available in your theatre.

My how they've changed and damn she looks good in that short hair.
Posted by Tam at 10:53 PM

Hi, Tam! My first instinct was to wait on reading your review because I haven't seen the movie yet, and then I thought, "What am thinking? I've read all seven books!" Good review. :) I'm looking forward to seeing this!

I loved the Deathly Hallows animation, it was soo good.

Great review, Tam. I agree with all your points. Overall I loved the movie and yes, the ending point was good, but now to wait til July. *sigh*

LOL I know Val, everyone knows how it ends, but they are still very enjoyable. :-)

I was REALLY impressed John, it was unexpected but so well done I think it fit in perfectly.

I took my nine-year old to it. She did enjoy it, but there were some points where she hid her eyes. I think the snake lady scared her the most. Heck, I hid my eyes at that scene. LOL

That was the scary part for me too Stephani. LOL I don't like snakes at the best of times.

Ooops. You better get watching there Chris. :-)

Loved the movie! And Draco did have a line - barely. He said a whopping four words: "I can't be sure." I didn't mind though, he plays somewhat reluctant bad guy so well, even just standing around looking uncomfortable. Loved the scruffy senior Malfoy. As great at the movie was, the part that made it for me was Snape's grand entrance.(Shivers like the hyena in Lion King.) There's just something about him...

Yes, Draco definitely played the part of the uncomfortable baddie Eden. Lucius was looking a bit bedraggled. Less slick than in the past. I have to admit he's always been the most attractive to me, and I wonder why my daughter is a Draco fan not Harry. LOL

There were some very cool special effects and dramatic moments. I can't wait to see part 2. But I must. :-)

I was disappointed to NOT see Maggie Smith in it. I LOVE her. Other than that, I'll agree with your assessment and probably have a review soon on the Palace.

Me too. She's great and it's kind of sad to loose those characters as the movies start to focus on life away from Hogwarts. Fun times though.

Will I get dagger glare if I told you I have never read or watch this book or show...

I used to work next door to where they preview this and I always ask for a day off - it is the worst place to be when Harry Potter opens... Nutters...

Potter mania is tragic to see...

Glad it worked for you and the kidlet though....

There do seem to be people who take it to a fightning level EH. But it's fun and it was one of the first books my daughter ever expressed an interest in. Oddly she's not a reader, the DNA seems to have gone wonky there somewhere. LOL