I swear it's been at least two weeks since I bought anything. There were 13 pages of new books at ARe. Whew. Most of them I'd already read but it told me I haven't been there for a while. So I'm back on a mostly short kick and as I finish those I'll move on to the longer ones.
Oh, stop by Wave's today and tell me which type of facial hair you prefer and if I missed any heroes who have the stuff.

Dressing Up is Half the Fun by Misa Izanki (18 pages)

Yes yes, I'm still buying the books in this series (world?). Whatever, I particularly liked this couple. Ravi hasn't seen Max in nearly two weeks because with Halloween approaching he's busy making costumes for the club dancers. He comes over finally and they make plans to go to a Halloween party at a very exclusive sex toy store. (Seriously, a party at a toy store ... right - okay, moving on). Anyway, Max has made a special costume for Ravi and himself and after smexin' time they head off to the party and arrive to a gift bag (use your imagination) and "entertainment" in the dungeon. What kind of entertainment you ask? No freaking clue because it was "the end". What? How can you not tell me what kind of debauchery is happening on Halloween in the sex toy store? Grrrrr. I was quite looking forward to descriptions of sexy wild costumes, live sex shows, animal sacrifice, I don't know but SOMETHING. Sigh. Yeah yeah I know. Stop buying them. But once you start .... slippery slope.
The Stripper's Story, A Valentine's Day Tale by Vic Winter (18 pages) 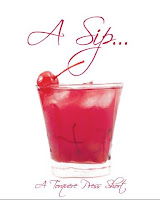 Steve works as a stripper and is a bit depressed that on V-Day he has no SO, but decides that he's treating himself to a nice dinner out. He thinks V-Day is a bit of a cash grab anyway, but he's happy to take the extra tips since gay guys seem to like taking their dates to strip clubs on V-Day. Oookay. He has to wait in the bar and runs into Joshua who he went to high school with. They get talking and decide to blow off the snooty steak house and go for pizza then blow each other. It's told in first person from Steve's perspective and he is pretty cynical about the whole thing but thinks maybe Joshua could be someone special and that it's more than a suck and run and the get along great. So it's a cute little story about reconnecting and I enjoyed Steve's perspective on the whole V-Day and commercialism.
Toy Box: Shaving by Sean Michael, Winnie Jerome, Lee Benoit (70 pages) 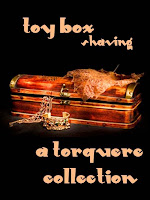 Water and Steel: This is a follow-up to another story I've never read but Jim's master joins him in the shower and he shaves Marcus' head and then Marcus shave him "down there" and they have some smexin' in the tub. Because I've never read these guys it's simply a piece of erotica involving shaving. It's okay though.
Leave Your Worries Behind: Nathan is having a bitch of a week. Cory his best friend invites him to stay with him and his older lover Alex for awhile. At dinner, Alex makes a move and it seems they are interested in having Nathan as more than a friend. So for two weeks they all have some fun when Nathan realizes that Cory and Alex are into BDSM and that being with him they are vanilla-ing it down. He confesses he wants to try it more hardcore and is involved in a shaving scene between Cory and Alex. It was an okay story. The shaving was with a straight razor but didn't sound too freaky, maybe because it's told from water Nathan's perspective.
Fireflies in the Bathtub: This is the story of Paulo and Preston who I've read about in these Toybox things but not sure they have a full story. I do like them though. Preston has bad arthritis and is having trouble shaving and it bothers him, the loss of control. However Paulo starts a shaving ritual that is more for their master/boy relationship. Paulo also convinces Preston to let him redo the bathroom and he calls in his hoard of Portuguese cousins to help him do it quickly. As a birthday gift for Preston he gets a bunch of fireflies and releases them in the bathroom. This one made me laugh a bit when Paolo reveals his bug surprise:

So all in all an okay Toybox, I am disappointed that Sean Michael didn't do a Denny and Cain from the Cherry Sours series. Oh well.
The Riddle of the Sands by Geoffrey Knight (253 pages)

Woohoo, look at that, it's not a short. I finished this on the bus back to the airport Wednesday. The Fathom's Five boys are back, this time searching for a lost pyramid in Egypt in exchange for the antidote to a poison their old nemesis shot into Jake's young homeless friend. The story focuses on Jake as he races to try and save Sam and then some about Shane and a British reporter Daniel he meets and who tags along with them and also Will and his father have some face-time as his diplomat father is captured by the bad guy as well. There's not all that much smexin' in this one, some at the beginning but once they get running around the world they don't really have much time. But it's very much The Mummy, Indiana Jones and Tomb Raider all rolled into one. You just have to run with the adventure and not let things like no scars after serious cuts, guys running around Cairo in the buff which no one notices and snakes that bite only the bad guys not the good guys, go. :-) It's not meant to be realistic or taken seriously. I did want to kick Will's father in the nads because I work with diplomats every freaking day and NONE of them are as big a pretentious prick as this guy. But ... fantasy, breath in, let it go. Trust me, the life of a diplomat abroad is not $500 shirts and champagne and caviar. I only wish.
Posted by Tam at 10:30 AM

LOL! We all have our own slippery slopes. :)

I like that last cover. I've been hearing good things about the Geoffrey Knight books... I'll have to check them out.

They are fun reads Chris as long as you take them with a grain of salt. As I said, it's much like and action adventure movie where they heal scar-free and in record time and are up and climbing walls minutes after having been beaten to within an inch of their life.

I've got The Stripper's Story although I'm not sure if I ever read it. The Toybox: Shaving is on my TBR.

The Riddle of the Sands sounds good.

" I did want to kick Will's father in the nads because I work with diplomats every freaking day and NONE of them are as big a pretentious prick as this guy." Ha, ha, good to know! Great reviews, Tam.

Oh, I like Drew over to the left there.

How can you not tell me what kind of debauchery is happening on Halloween in the sex toy store?
Don't you HATE it when they do that? Did they think we wouldn't want to know or was it just too much work for me?

You do make me laught with these summaries..... That Knight book seems have touched a nerve..

I do try to read something from that Toybox series - every few months. Some of them are not bad...

Riddle is a fun read Lily. Stripper was okay, just a short quicky.

Doing my part to raise awareness of life in the diplomatic corps Val. :-)

He is pretty Tracy.

I think it seemed like too much work for the author or I suppose she'd reached her sip word limit, but I was quite disappointed. Sigh.

I have severe issues with parents who reject their kids for no good reason EH. Considering I've never experienced it you wouldn't think it would annoy me so, but it is one of my hot buttons. LOL

The Toybox can be hit and miss. Often they have stories from other books which may not mean much (as the first one in this case) if you haven't read the previous book.

I have riddle of the sands in my paperback tbr pile. I never seem to be able to get on with anything in this pile because I'm so bogged down with all the ebooks I have committed to review *sigh*. Sometimes I think I should have a week off just so I can catch up.

I liked the shaving antho and probably liked the 2nd story more than you, Tam. As you say, it would have been great to revisit Denny and Cain

I know what you mean about paperbacks Jen, unless I'm traveling I just never pick them up. I started Riddle months ago and finally got it finished. No because it's bad, just don't read much paper.

I actually liked Paolo and Preston's story as I've kind of developed a soft spot for them over time reading these Toybox things.