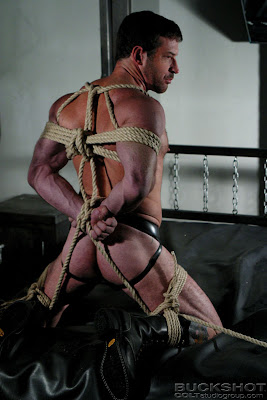 Call Me Sir by Stormy Glenn

Joey has been hanging at a club for a year but no one asks him to dance or fuck or anything. Sadness. He decides to try out a new BDSM club but when the owner of his regular club finds out he freaks because he wants Joey and warned everyone off but wanted to give him time to get to know him because he's into the D/s lifestyle and didn't want to freak him out. He chases after Joey as everyone tells him he's destroying the kids self-image so get his shit together. When he finally confesses what he wants, Joey is more or less on-board with things and then they have a run-in with Joey's Dad. On the whole I enjoyed this more than the tri-omega Doritos. I am a sucker for the poor kid with rotten self-esteem which was happening here. A cutie can only take so much rejection and I wasn't sure how ignoring the kid for a year was helping him get used to the idea of D/s. He never talked to the kid much or even hinted that he was into that. Did he think by osmosis the kid would just figure it out? Duh. And for a Dom his lack of control was pretty amazing. Anyway, despite my feelings about the whole issues I did really enjoy it. I liked Joey and thought on the whole he seemed to have his head screwed on straighter than Logan most of the time although he tended to leap to conclusions, but considering his self-esteem was in the toilet I let it go. He got better.

This is a continuation if you will of the first story. Dante is the owner of the BDSM club and Daniel is Joey's ex-roommate. So Joey sets them up and things seem to be going well when Dante leaves town for two weeks and doesn't come back for 6 months. (He's some sort of spy or something, most of us think this is pretty unrealistic, even spies have cell phones, but whatever). When he gets back it turns out that Daniel was badly abused by a Dom (130 stitches but no mention of scars) and now has no faith in the lifestyle. Dante is determined to help him heal and takes him home (how did he get him there without him knowing, he was sleeping not drugged) and proceeds to teach him to trust while toning down the D/s stuff. Daniel and Dante were into more hardcore stuff than Joey and Logan but now it's confined to some spanking and being stern. Of course the Dom who injured Joey is still out to get him. Okay, despite all my parenthetical comments, I really liked this story. Yes, there are plot holes the size of Texas and some editing errors, but on the whole I really felt for what Daniel went through, not only his fear after the attack but being pissed off that Dante took off and left him without a word. The policeman Jack who helped them get the attacker has a pretty big role in this one so I'm assuming there will be another book with him. Although he doesn't seem to be into the BDSM stuff so not sure where that will go. But I'm seeing another book in his future.
Like I said, these are very BDSM lite and heavy on the D/s in the relationship sense, not the physical sense. Yes, big strong alphas, small spunky betas, the class SG formula but I felt it was delivered here better than in some cases. And only one stalker Chris. ;-)

Only one stalker! Must've been a stalker shortage. ;)

There was the evil father though which might be nearly the equivalent in trope points.

LOL! One stalker is enough!

Doritos for breakfast. The breakfast of champions and white trash. LOL

I sense a spike in Dorito sales today. LOL Have a great day Cecile.

I liked both of these. Love the picture.

I wasn't sure how ignoring the kid for a year was helping him get used to the idea of D/s. He never talked to the kid much or even hinted that he was into that. Did he think by osmosis the kid would just figure it out? Duh.

this is pretty unrealistic, even spies have cell phones, but whatever).

It's like, no kidding! Do authors think we readers are stupid or what? I want to say, try a little harder with your plots before you rush these things to publication.

To be honest Lily it was hard to find a good picture that was more arty, but that one worked. :-)

Val: Stormy Glenn is known for huge plot holes and a necessary suspension of disbelief, but once you get past that, it's junk food reading and to be honest this was better than most.

What bothered me more was that Daniel fell asleep at Joey's house on Dante's lap and woke up at his house, undressed and in his bed. Really, how in the hell do you get a sleeping man from one location to anther, up stairs and undressed and into bed without him knowing. Especially when he's suffering PTSD so is very skittish. Some realism would have helped me with that. But again, deep breath and let it go. LOL

"But again, deep breath and let it go. LOL Arrgggh, I can't! Those of us writers who are working our asses off to get it right just can't help but roll our eyes at carelessness that is this huge and blatant.

Um, while I've got you here, what's with the Doritos? Is it some exotic sexual euphemism? Do I even want to know? Ha, ha!

Val: The other day I noted that Stormy Glenn books were my version of literary Doritos. Bad for you, full of not so good things (like plot holes and inconsistencies) but as you are eating them they are delicious and hit the spot at the time. :-)

So these books were my Dorito treats for the ... well, few weeks anyway. You can't overdo it on Doritos or you start to feel a bit queazy.

Oh and I think Doritos are way to pointy to be used in a sexual way. Ouch. LOL

I love the rope work on this one - I could look at it for ages...

I have read the first one of those book - the ending just slide off into the ridiculous after a while - but Glenn is a guilty pleasure for me - so I know I will read the other one...

EH: Stormy Glenn seems to be a guilty pleasure for a lot of people. For some reason you can forgive stuff in her books that would normally drive you batty. LOL

That pic certainly draws some attention. I like the rope work too, but the guy... I don't know, lol.

I don't think I've tried Stormy Glenn's books yet, although I might have one or two on my ereader. Good to know what to expect and to turn on the suspension of disbelief switch ;)

As long as you are willing to be a forgiving reader with Stormy Glenn it's enjoyable. An example, he is at the bus station and they say "bus station" several time and suddenly at home they go "When he phoned at the train station." Ummm. When did the busses turn to trains? LOL Little errors like that I really think an editor should catch. But I still enjoy reading them.

Yep, annoying mistakes. Especially when there's more than just one. I'm glad you still enjoy the stories :) Then I probably will too.

Well I guess I have too come up with something kinky then I guess we can talk in are next session.

Thanks for the information you have shared with us... Nice blog post..