So FINALLY our gay TV channel had something worth watching, although I'm thinking I might start watching Gay Army since it seems funny. Last night this movie was on so I thought I'd give it a whirl.

It's from 2006 and was made on a shoestring budget and that was my biggest complaint. The sound. I had my TV cranked as loud as it would go at times to hear them, then the next scene the microphone would be closer and it was loud, then far away and quiet. Sigh. But sound issues aside, I found myself laughing more than once.

Todd is a divorced man who is finally going out on a date with a woman he met over the internet via his brother who is mooching off him and living at his place. Oddly the meeting place is a gay cafe. Todd is very uncomfortable and has a little run-in with a guy, but they eventually agree to share a table until their respective dates arrive. They get to talking and ... OMG, he is Kelly. He assumed Kelly was a girl as his brother had hooked them up. After they get over the shock, they do have a lot in common and go out to a movie. To play a joke on his brother, Kelly sneaks in with Todd and they pretend to have sex. Only the whole thing backfires because Todd's brother phones his mother who comes running and NO ONE will believe he's not gay.

He comes home to find the head of the local PFLAG at his house. His mother is played by Sally Kirkland and she is very funny and makes Todd crazy. Also, when he goes out to a movie with Kelly and some gay friends he runs into his gay co-worker who then spreads the word and the next thing he knows he's being offered partner benefits by his understanding boss, his female coworker is asking his advice on the best lube for anal sex, his coworkers pay for a male stripper for his birthday, and he's invited out for drinks with the girls. Still, no one believes he's straight no matter what he says. It was really very funny and Kelly was so sweet and cute.

Even funnier, Todd's older brother who seemed homophobic admits that he's gay and no one believes him because his mother thinks he's just jealous of the attention Todd is getting. In the end Todd starts to question his sexuality. He likes Kelly a lot, and when he picks up a girl at a bar, Little Todd decides not to show up to the party. Kelly's solution is to try sex with him and if he likes it, he's gay, if not, then he's straight. Unfortunately Kelly ends up with a broken heart out of the deal. You could see it coming and I was kind of hoping it would be a GFY HEA ending where Todd realizes that he loves Kelly even if he's a guy, but the ending was probably more realistic. In the end they manage to remain good friends.

If you can get a hold of this movie either through Netflix or something on-line it's a great little movie to lighten your mood. It's not graphic. The only sexual contact you see if Kelly and Todd kiss although there lots of innuendo. Sure it's not academy award material and the sound is not great, but I found myself snorting so many times as poor Todd tried to convince everyone he was straight and they insisted he was just in denial. And oh, Wilson Cruz is so cute. 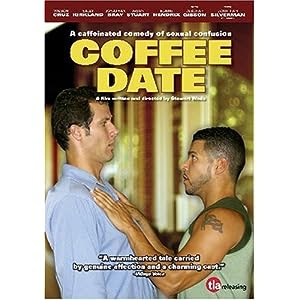 Sounds like a fun move, and both actors do look awfully cute!

It was a fun movie and they both played well off of each other.

I did feel bad for Kelly, he knew he was getting to close to a straight guy, but I was glad after they took some time to regroup they could still be friends.

Ack, I have trouble with those "maybe, maybe, maybe . . . nah, it ain't happening" plots. They drive me crazy!

The humour was the primary thing though. Most parents want to deny their kid is gay, this guy's Mom embraced it even though he was straight. It did get more serious at the end, but it was still an amusing movie even if I felt bad for Kelly, he got over it though.

My God, from your cookie shot, I'd have to say Wilson Cruz is MORE than just cute! He's Studilicious! Ricky from My So-Called Life certainly growed up real hunky! Yum!