Well, I'm struggling with my parents' computer so you get a book update rather than a holiday update. I read these before I left. I haven't gotten much reading done except for some yaoi I need to get sent off. We've been busy, rodeoing, visiting family and just kind of hanging out. Hopefully I'll get some holiday snaps up tomorrow or Wednesday. Have a great week everyone.

Alli is a very unlucky fae. After being rejected by his people for being gay, he’s forced to live in the human world, however his magic reacts badly on earth and he ends up being a walking disaster. Michael is a bear shifter whose seeking something more and decides to settle in the same town which is known to be friendly to paranormals. He literally saves Alli from being run down in the street and somehow is tasked with caring for him. Alli has attitude. He has no intention of getting close to anyone because he’s been burned and he doesn’t want someone to have his bad luck. However Michael doesn’t take no for an answer and basically insinuates himself in Alli’s life. When someone attacks Alli’s shop writing gay slurs on the walls and suddenly seem to be stalking him, Michael calls on his family for help along with the local deputy who keeps an eye on Alli. I really liked this story. The difference between cynical crabby Alli and go with the flow mellow Michael was fun to watch. I enjoyed seeing Alli bowled over by a guy he couldn’t scare off. So all in all a really cute story with a touch of stalker. :-) But it wasn’t really a major part of the story, it was more Alli dealing with his bad luck and watching Michael break down his walls. 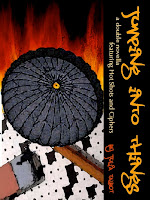 This is a double feature with two brothers. The first is the story of smoke jumper (forest fire fighters who jump out of planes) Eli and pilot Jed. Eli is from Oregon and comes to Colorado to work. He ends up spending the night at Eli’s because they don’t have a hotel. Before he knows his, they’ve slept together and Eli freaks out and pushes Jed away. Things are a bit prickly but eventually Jed convinces Eli to give it a go, especially after he breaks his ankle and is stuck in town unable to travel. However when he’s cleared to fly he can’t seem to get out of town fast enough, but eventually he agrees to move back to Colorado and give it a whirl. Book 2 is Ross, Jed’s “straight” brother who’s a skydiving instructor in the military. He meets Kevin, a civilian employee and is surprised to find himself attracted but goes for it all out. At first Kevin is freaked out because he thinks Ross is playing at being gay, but soon he settles down and they are living together. In general I liked both stories; I especially liked Ross and Kevin (although the whole DADT thing was never addressed). My issue lies in the sequels which I haven’t even read yet and won’t be. In #2 Kevin and Ross have issues and in #3 Kevin leaves him and Ross finds romance with someone else. Umm. No, just no. If someone is with a jerk and they break up great. If the first guy dies, fine, but I adored Kevin and I don’t know why he breaks up with Ross and I don’t wanna know. I’m disappointed I checked it out. Well, maybe not, because I’d be really annoyed if I bought them, so I’m just going to pretend that didn’t happen and they all are living HEA.

Another of the Hammer novels, Giles is a “crazy” artist who literally runs into Harrison while escaping from the stress of his opening. However Harrison is intrigues and goes to the show and helps Giles out by taking him away from the show. However he soon sees that Giles has issues, he’s a cutter, although Giles won’t discuss it. Harrison figures that Giles needs pain to focus and clear his head, and he can offer it through BDSM. However Giles thinks BDSM is something in books and pretty much ignores the whole thing and even when Harrison is doing it, tying him up, flogging him, he doesn’t really “get it”. Lots of sex telling him why he needs it, and I did find the whole thing where Giles thinks Harrison is very sweet (in part because he’s gives Giles the peace he needs) which rubs big bad top Harrison the wrong way. He is NOT sweet. Giles had a twin sister who was his manager and very supportive of him and his relationship with Harrison, however another older sister who had Giles committed to a psychiatric hospital at one point was never really used in anyway, just said she existed. Having her freak out what have added some tension. For those who like the Hammer series you’ll enjoy it because it has all of the hallmarks you’ve come to expect. I think my patience with Giles would have run out about day 2 with the whole ‘have to be crazy to be creative’ thing going on.
Posted by Tam at 8:45 PM

Thanks for noting that the stalker bit is minimal in Lucky! *adds to TBR*

Smart woman on stopping with the first Thatchers book. I just got progressively more pissed.

Hope you have a great week!

It was mostly an excuse for Michael to stay near Alli and to interact with his brothers, the who is it part didn't really take centre stage, although I did want to smack Alli at the end. Still, I thought they were so cute together I let it go. :-)

I'm not really into the whole 'cowboy' thing, but for Your Hottie of The Day, i would damn sure make an exception!

Sometimes the sacrifice is worth it. :-) So far it's been relaxing, in large part because there is nothing to do here. LOL

I was so upset when Kevin left. Ugh, talk about a downer! I've read them all because by the time I got there I'd already bought them. Otherwise I'd have stopped at that one. I'm sure at some point I'll get to Drawn. The first one sounds good too.

Glad you're having a good vacation!

Tell me why he left Lily. I need to know. LOL Or e-mail me if you don't want to post it but I figure he must have a pretty damn good reason for me to not want to murder him.

Jumping Into Things sounds good. I'm glad you checked out the sequels and let us know about them because I would have been upset at that too!

Oddly enough it's still annoying the hell out of me. LOL I should never have checked, but I would have read them, so I suppose I was screwed either way. Sigh. I'm annoyed with Kevin now ... and he's a pretend character. Ack!