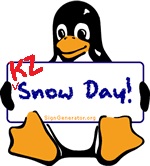 No, even in Canada it doesn't snow in August. I'm NOT ready for real snow. Ugh. However, now that KZ Snow has a spanking new website, I realized how far behind I was on my Snowy reading, so I caught myself up. :-) Now we can have a Snow day review. Wheee.

Chris is addicted to heroin and finally knows he has to get off and goes into rehab. On his last night, Denny appears in his room and he freaks. Then Denny shows up in his apartment. He's sure he's having hallucinations, although little things Denny says start to add up, and it seems Denny was his imaginary friend as a child (perhaps not so imaginary) and has been looking out for him his whole life and growing along with Chris. Can Chris accept Denny is really a person? Is it too freaky? I've never been addicted to drugs or even really known anyone who was, so I could be wrong but I thought the siren's call of escape and drugs was really well done. Chris still wanted them, even though he knew in his head it was bad, his body was another matter. I also enjoyed seeing Denny's perspective. He was as confused at times as Chris, his desire for Chris and his love for him seemed to be out of place for his role as guardian angel and what did that mean? So there were lots of levels, some light positive stuff, some more reflective and some not so pleasant, but it sucked me in and I wanted to know how it all worked out. The epilogue (which is really a prologue I suppose), I found particularly touching.

It made me think though, if guardian angels exist, and you don't believe in angels (not saying Denny was an angel per se, he didn't even seem to know), do you still get one? I never had an imaginary friend. Maybe I don't have one. Maybe I don't need one. :-)

Quinn and Hunter are psychic mediums. Quinn is in love with Hunter but beyond one little incident in a car, Hunter appears to be straight and was even engaged to a woman for awhile. They are approached by odd, but well dressed Dustin, who asks to work with them, in return for a favour. Okay, Dustin is a zombie and he can't seem to find his ex who turned him and needs the guys help. And maybe he can help them along the way. This is a very cute story with some creepy paranormal stuff. I liked the descriptions of their paranormal work and how it affected them emotionally to be connected to someone who was murdered or dead. Their ghost hunting in the old asylum was suitably creepy and yet had an edge of humour to it. I really felt for Quinn. He was going to have to decide if he could continue to work with his best friend, considering he was in love with him and it was just getting worse. You only get Quinn's perspective, so you don't really know what Hunter is thinking or even Dustin much, but I liked Quinn so much I was okay with that. It was neat to get a quick glance at Jackson Spey. A lighter look at zombies, no brain munching involved. I really enjoyed this.

Well, this is quite different and had me racing to the end and probably a look of horror on my face at time. I fear for KZ's mind at times. She comes up with some creepy weird stuff. 'Tis good. :-) Fanule, Fan, is a mongrel, which is part human part something, and they live in the equivalent of a ghetto. He has been elected their de facto leader and he knows something hinky is going on. Mongrels are disappearing and he feels it's got something to do with the mechanical circus. He goes there and engages Will, who sells patent medicine, to try and find information. He doesn't get much, however later in a bar he runs into Will and they spend the night together. Will is smitten (they both are) and eventually along with Will's ex-lover, a bounty hunter, and Fan's ex, a vampire, they work to find out what's going on. There is so much here it's hard to describe, but it was never too much. This is steam punk and I'm pretty illiterate in the steam punk world, but there was enough to give me an understanding without overwhelming me with details about how every little machine worked. I appreciated that. And wow, the bad guys were freaking creepy and it was rather disturbing what they were doing and planning to do and I was on the edge of my seat for the big show-down. I loved Will and Fan and how they were both sort of stunned by finding someone to love. It was also nice not to see a "perfect" hero as Fan suffers from bi-polar disorder. I'd love to tell all about the supporting characters and how some parts made my heart break a little, and it seems like "All that in 200 pages? Too much no?" But it wasn't. It all fit perfectly. Can't believe took me so long to read it.

So I think I'm caught up now. :-) So you've got your choice here. Something dealing with a serious issue like drug abuse, a lighter look at zombies and magick, or a more dark and sinister steam punk mystery. Something for every mood.
Posted by Tam at 9:14 AM

I haven't read Abercrombie Zombie, but will soon... the other two I've read and enjoyed lots. The epilogue (prologue) of Visible Friend was so beautiful for me (made me cry). Loved Mongrel as well... hope there's a follow up, although if there isn't I'm good.

KZ Snow is great author. It seems like every book just gets better :)

I agree Mariana, I may have sniffled slightly. Ahem. :-) I think you'll enjoy the zombie story. KZ is a great author, she always sucks me right into the story.

Oh cool..I I've read a couple but none of these. I will def have to check them out :)

They are all really good Mandi and you can pick one that suits your mood, whether looking for something a bit more serious or lighter in tone.

Great, Tam! Now I havento add a new author to my list! Mongrel sounds too good to pass up on. I like creepy adversaries *grin* Perhaps I will curse this when I'm alone at midnight hearing weird noises but it doesn't keep me from reading such stories ;)

Oh you really must check out KZ's work Leontine. She's a great author with everyone from lighter contemporaries to complex paranormal stories. The bad guys in Mongrel themselves didn't come across as creepy (more slimey) but their evil plan was definitely creepy.

I have all of those and I really need to read them!!

So, the only month it hasn't snowed at my brother and SIL's cabin (in north central Minnesota, near the Boundary Waters Canoe Area Wilderness) is July. :)

You must get to them Chris. All good reads. And that wasn't snow, it was ... solid rain, yeah, that's it.

Thank you, sweetie, for taking time out of your busy life to read three of my books in a row. Yikes. Even I can't take that much of me at once. (Oh ... and you worry about my mind? Who dreamt up a hamster shifter? :))

But hamsters are cute and cuddly. :-)

It was my pleasure and they were all so different in tone and subject it was easy to read three in a row. I've ran into trouble sometimes with series where I've read all in a row and you start to see duplication which is not good, but in this case, that wasn't an issue. All great reads and I'm caught up, so you better start writing faster. :-)

I'm writing slower, not faster. Next book is a novel due out in mid-October (the closest I've yet come to YA). So at least you have some time to recover. :)

I really enjoyed Mongrel and Invisible Friend. I need to get AZ and soon, sounds good. :)

My first thought was "Why does Tracy want to go to Arizona?" Not that it's not lovely. LOL It's a fun read Tracy, I'm sure you'll enjoy it as well.

LOL No, I was just too lazy to write the whole title out. But AZ is lovely. :)