So, finally getting the energy to post. Okay, I don't have the energy but I'll forget it all if I don't. We've been touristing our butts off. For those wondering how wacky the Eminem concert was, this is the field from the top of the Willis Tower we went to on Sunday. You can see a small crowd in front of the stage on the left upper corner. Imagine that red square COMPLETELY filled with bodies, hot sweaty high bodies. :-) The yellow box is the stage, the tiny red dot just in front of the stage was us. Then we had to fight our way out of that mass of bodies and back to the Willis Tower (across the street from the train station) in 40 min. Ack. Definitely an experience. 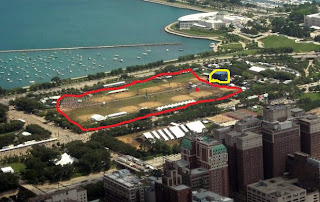 So after going up the tower and looking around (I highly recommend the City Pass which gets you into several museums and sights and lets you by-pass all of the regular lines. It was like being a VIP.), we went to the Aquarium. It was pretty good. We enjoyed the sharks and the belugas who were quite playful and there was a special jelly fish exhibit which was cool. 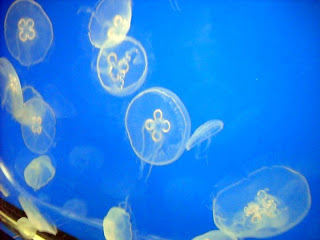 When we came out of the museum we expected to catch a cab to the train station thinking 40 min. would be PLENTY of time. Oh no. It was absolutely pouring rain, there were no cabs, we missed the bus, we had no umbrellas so were soaking wet. Ugh. Finally got to the train station 10 min too late and the next train didn't come until 2 hours later meaning we would have gotten home at 10:00. My friend we're staying with drove all the way downtown to pick us up and ordered Chicago style pizza which we picked up on the way home and crashed. Ugh. The weekend train schedule sucks. But hey, we saw a rainbow over the Planetarium. 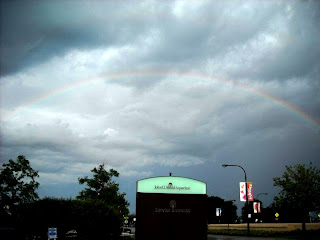 Monday my friend Jenn picked us up and we went to the zoo where she is the head nutritionist. Also my friend Tracy had to leave for an unexpected business trip so we are left cat/house sitting. The zoo was really very nice and it was fun to have Jenn who knows all of the animals by sight and can give you their history and who's been sick and who's on a diet or won't eat or had how many babies. The polar bear was a total ham and was playing it up for the audience and their dolphin show as really very good. Oh and of course there was the little baby wombat (well, he's pretty chubby but was absolutely adorable). It was fun to spend the day with her and her husband. We made it home in good time and had leftover pizza for dinner. :-) 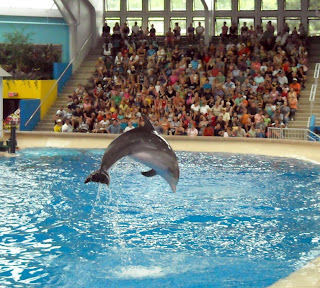 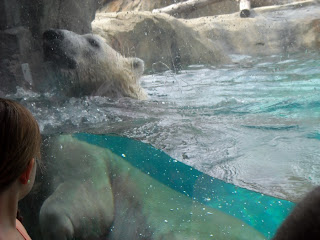 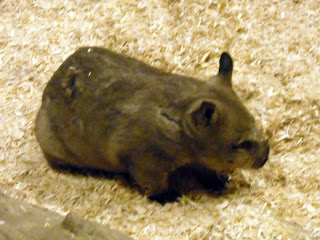 Tuesday we went to the Field Museum (which is a natural history museum) and the Planetarium. Both where good but when you've seen one gigantic dinosaur you've pretty much seen them all. The special horse exhibit which we paid extra for was very worth it though. After we finished up we caught the water taxi across the harbour to the Navy Pier where they have the big Ferris wheel and some rides with small shops and restaurants and theatres. We walked around, ate dinner then JUST missed the damn train home AGAIN. Sigh. At least it ran every hour. So I read more of  Lord of the White Hell and hoped like hell my friend's car had not been towed from the Park'n'ride at the train station because we could not for the life of us figure out what our parking space number was so I just plugged in 250 and hoped no one noticed there was no car in spot 250. It was still there. Whew.  :-) 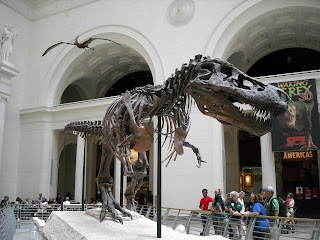 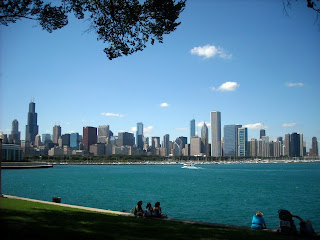 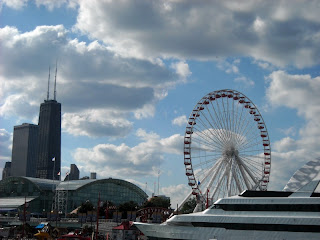 Today was another adventure. Driving in Chicago. My friend suggested we take her car to the Museum of Science and Industry because it's rather far south of downtown. So I mapped it out on Google Maps and we did really well, except at 10:30 in the morning hit a massive traffic jam. Sigh. But we made it in a little over an hour which was expected. The museum was HUGE and had lots of very cool stuff. The Omnimax movie about tornadoes was amazing, then the weather section with a tornado and the lighting machine and lots of fun stuff was great. There was a baby chick hatchery and an actually German u-boat which was captured during WWII. Seeing how they got it in there was cool. There were so many interactive displays and I find at many museum only about 50% were working but here I'd say 95%. The interactive periodic table where you could use magnets to drag elements and put them together to create compounds was a big hit with my chemistry loving kid. I love the real body displays, the actual nervous system or the muscles of real people was amazing, freaked the kid out, she couldn't look. LOL Guess she won't be going into medicine. Anyway, I'd say a must-see no matter your age. Some stuff for little kids but lots for grown-ups too. 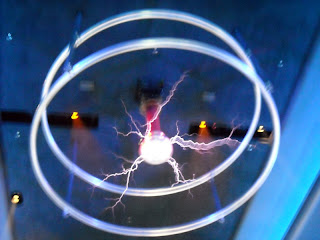 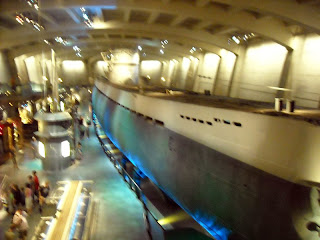 Then to get home we had to go right through downtown at 4:30. Actually downtown was fine, until there was a construction detour, but we were patient and everything went fine. I didn't get lost although it took us nearly 2 hours to get home. Ugh. Then we went to Target to check it out because you have cool products we don't and cheap things like Ben and Jerry's ice cream for $3.25!!!!!!! If I can get it for $5 on sale at home I get it. So we got two and got $1 coupons for more. Hell, I'd exist on nothing but Ben and Jerry's. I got Red Velvet Cake (yummy) and the kid got Phish Food. Then for dinner we went to Sonic. My child's dream has been to go to Sonic. The deliver your meal to your car on roller blades. *shrug* It was a burger. The strawberry lime-ade was tasty though.

So that's it. Tomorrow we are hitting the shopping district. We've done no shopping except for a couple of t-shirts for the kid. Not really looking for anything but who knows. We might go for a boat tour, we'll see how we feel. My friend gets home from her trip late tomorrow night and we have to leave at 6:30 Friday morning for the airport. Whew. A very busy trip but we are having a good time. Will take my feet a few days to recover. :-)

I need a nap just from reading about your vacation! You sure have crammed a lot in... wait, I know that about you, having gone on vacation with you once. ;)

The rainbow was especially cool - sort of a consolation prize. :)

Chicago is not the place to go if you want to relax. Too much to see and do. I hate spending good money to go somewhere, then seeing nothing. May as well stay home. :-) I think we are getting tougher though, I'm no longer QUITE so exhausted by the end of the day.

Tam, I'm so jealous! We only had this past weekend and Monday in Chicago. :(

We spent it all on the Chicago Art Institute, the Shedd Aquarium, the Field Museum (figures that you and your kid would have sprung for the Horses exhibit, while we passed on that but couldn't resist the Whales, ha, ha!), and the river/trolley tours.

I would have loved to have seen the Willis Tower, the Navy Pier, the U-boat thing, the planetarium, and much more of Millenium park and the loop.

You're so right about those city passes. We loved bringing those out and jumping to the head of the lines, and getting the special deals. :D

We're definitely going to have to go back for a longer period of time. Boston was fun, but Chicago was just amazing!

I love how I get to vacation vicariously through you. :) I'm glad you're having a good time.

I want a baby wombat.

My kids would love all those museums! I'm so jealous that I want to hop on a plane now and go to Chicago!

You sound like you are having a fabulous, if a little exhausting time! Hope you have a safe trip back on Friday.

I agree Val, Boston was nice but there is so much more in Chicago. It's a great vacation city. We went to the Planetarium rather than the art institute.

It's a perfect vacation spot for families Jen. Well, expensive probably but so many activities and museums that cater to kids of all ages. I'm looking forward to being home though and in my own bed for a bit.

Wow you've done A LOT of stuff. How fun. I really liked Chicago when I was there but it was too short a time to check everything out.

Those real body displays ARE freaky - I'm with the kid. lol

Seems like you're having a great vacation. I was in Chicago a few years ago and loved it!! So much to do in that city. Hope you enjoy the rest of your time there. :)

There is so much to do Lily. Probably 10 days would be better and a little less packed with activities. But we had fun. Today we hit Borders and spent most of our time and money there. :-)

I never knew I wanted to go to Chicago before your post. That wombat is super cute. I love aquariums, museums and Ben and Jerry's. Next time take me with you!

Deal Michelle. :-) I didn't know I wanted to go either until recently. It's a fun city for a vacation. Just make sure you have your walking shoes.