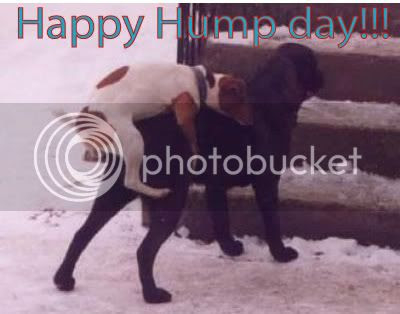 Doesn't this picture just remind you of a couple of books? Jet Mykles Hell perhaps? Or Ally Blue's The Happy Onion? Perserverence, he has it.

So I have hardly read anything because ... I don't know, busy busy. Went to see Sherlock Holmes last night. Lots of excitement, action, mystery and intrigue. And Robert Downey Jr. shirtless. I know, I know, he's not to everyone's taste but considering I'm usually all about the twinky boys he works for me. But now that you people actually show up here and read stuff I feel compelled to put something here even if I don't read much. Arrgghh. The pressure.

Umm, besides my lack of reading and pictures of dogs humping, there is a very funny post by K.A. Mitchell over at Slash and Burn today. Her characters give their New Year's resolutions.

Lily has some of the new books that are released this week with some interesting ones listed. Cowpunk? Ooookay. KZ's final (?) book in the Utopia X is out this week and there is one that has caught my eye by an author I've never heard of, Rayne Auster. So I might see a bit of shopping in my future. Just a bit.

Speaking of KZ, she's blogging over at Clare London's place today. It's Clare's birthday month - Happy Birthday Clare!!! - and she's having a guest poster everyday so you can go and check out all the fun. Just click on the dates at the top and read all the fun posts. Yesterday was Josh Lanyon, I know Wave is doing a post and who knows who else. Lots of fun and funny stuff there.

Okay, I did do a bit of reading so I shall mention that as well.

It's short, it's only 46 pages but is one of the funniest 46 pages I've read in a while. It's so funny I was literally laughing out loud (not LOLing in my head) and my daughter thought I was insane. Okay, it was so good I had to read part of it out loud to her. (the non-smexin' part) It was so what I needed Monday. Straight Ian lives with his best friend forever Cal who is gay. Ian notices himself noticing Cal in other ways and he's not completely freaked out about it, but doesn't do anything. He gets a fish bowl to decorate his room and Cal buys him a fish and starts sneaking into his room to check them. To keep Cal coming in they get more fish and more fish and finally kiss but it doesn't seem to go further until Ian enlists the help of the teenage girl at the pet store who as been selling them fish. It was just so funny, they are completely hapless and everything that can go wrong seems to until FINALLY they manage to get it together. Okay, here is the funny paragraph I read to my daughter:

That noise Ian was making? Totally a squeal. It was the love child of a dolphin and a sea monkey. And yes, Ian knew sea monkeys didn't make noise, but he couldn't figure out how a dolphin would get on land and mate with a regular monkey, and therefore, it had to have been a sea monkey. "Eeaagggaaghheee!" That was not a sound human vocal cords evolved to create.

So if you are having a shitty day or just need a laugh (hell, it's January in the northern hemisphere, we could ALL use a smile), I highly recommend this book. Oh, I HAD sea monkeys as a kid. Don't tell me you didn't, or at least didn't try to grow them.

Woohoo, I can count this towards my challenge. Yakuza member Tatsurou is a debt collector. He's not great at and rarely has any money but he's in a particularly tight spot getting some money from an old man. Seems the old man had helped Tatsurou as a troubled teen and he is having issues being as tough as he should be. When his boss tells him get the money or else he ends up drunk and meets up with his high school nemesis Sagami who runs a big bank. Sagami offers to loan him the money and he has to pay by sleeping with Sagami. Tatsurou is torn between getting the money and freaking out about sleeping with a guy, Sagami in particular. But he agrees, resisting (and coming) all the while. Once a month he repays his debt in bed and despite himself starts to like it but would never admit it. He is once again sent to get money from the old man and accidently almost gets himself killed burning down the building. When he's fired for being weak Sagami offers him a job but Tatsurou resists yet is coming to love Sagami. There is more action with a rival Yakuza gang, a kidnapping, a rescue and unexpected aid from Tatsurou's assistant whom he can't seem to get rid of.

On the whole this is one of the yaoi novels that I really enoyed. I actually wanted to know what happened. I'm not sure if it was the translation which seemed to use a lot of North American phrasing so it didn't sound so stilted and odd. I liked that it showed what Tatsurou was thinking, how he came from a shitty childhood and had trust issues, dealing with liking a guy when he was always straight, having to save face by not admitting he liked Sagami. So I liked his character a lot. You didn't find out much about Sagami except that he loved Tatsurou since high school. (They are 27 now.) But this one really worked for me even if I don't understand the whole Yakuza system and that legitimate lending institutes hire the mob to collect on their debts. Seriously? Okay, cultural divide happening again. LOL But I stayed up until 12:35 last night so I could finish it so I obviously got caught up in the plot despite stuff that really doesn't make sense to me not being Japanese.
Posted by Tam at 9:36 AM

I really loved Go Fish - and I included quotes in my review, too. I was particularly fond of the not doing so well keeping his internal dialogue internal bit.

I know, I know. I'm going to need to start checking out the spam that shows up in my inbox to see if I can get some discount Xanax to cope with the stress.

There were so many funny parts. When they told the store owner about the dead fish and how they tried to give him mouth to fish resuscitation. Great stuff.

I feel the sudden urge to reread that one...

Thanks Val, I can't believe I found it. LOL Google is my friend.

I really did enjoy the Yakuza story even though I don't know much about them as an organization besides it's more or less the equivalent of the North American or Italian mafia. Of course they are "romances" so the realities of it are downplayed somewhat.

No to blow my own trumpet or anything but I'm doing a post at Clare's this month too. Don't know what about yet and I'm starting to panic.

That was funny too Jen. I look forward to your post at Clare's. I'm sure you'll come up with something brilliant. Like dead guys ;-) or something. LOL Zombies? Zombie love. Do eeeet.

I haven't read a Zombie book so I can't possibly comment on that. Apart from that one you reviewed last week, has anyone actually written a zombie romance? The whole idea of it leaves me cold and a bit creeped out.

Only Ally Blue that I know has a freebie on her site which is funny and sweet and gross all at the same time. LOL It's a great Halloween m/m read.

Okay, skip zombies. Underwear? Everyone loves posts about underwear. Condoms? How many kinds do humans really need? Flavoured lube? That might require some research on your and your hub's part. ;-) I got a tooooon of ideas. All of them lame and weird, but they are ideas.

Would zombie love and necrophilia be the same thing? If the corpse moves does that count? Okay, this is deviating in a dangerous direction.

Thanks for the suggestions. I'll have a think and see what I can come up with. As long as I'm not expected to be witty, then that's OK.

I've heard good things about Go Fish. I think I'll have to get it real soon.

It's definitely cold outside and I think Arthur needs more than that scarf to keep him warm. I've got a bit of space under my blanket I can offer him. Do you think he'd be interested? ;)

You do find some interesting photos, Tam!

I'm so sorry you're feeling stressed. My blog is still a big sekret so I am blessedly stress-free *g*.

And I LOVED that post from KA Mitchell. I'm sure that if you haven't read her books you wouldn't find it so amusing, but I just adore stuff like that.

I guess I'm going to have to read Go Fish. Sounds fun and I could use a laugh.

Lily: I'm sure he'd be happy to share your blanket. He is just a tad under-dressed, even for Florida these days.

Wren: You silly girl, now the secret it out you're doomed. No one used to come here (except Kris's Mumma would comment when I didn't post LOL) and now it's like I can't get these people to go home. :-) But I love 'em all.

Really, I think those of us who have read it are all turning into Go Fish pimps. It will cheer you up. That or sea monkeys, those work too.

Hey, I've been lurking here for ages. I just didn't comment cos I got the impression this site was just for you to get down your thoughts and you weren't wanting people shouting from the peanut gallery :).

I only started it Jen because for some reading challenge at Anesthezia's (sp?) you had to have a blog so she could keep track of which books or how many you read. Then periodically an author would freak me out by showing up and then various members of the peanut gallery showed up and it's taken on a bit of a life of it's own. But it's seriously NOT a review site, just somewhere I keep track of what I read with my own brand of opinion. :-) I suppose I could keep it simple and just give a thumbs up or down but I do like to say what I liked or disliked. Hopefully more liked for a bit in the near future.

Sorry, Bossy was distracted by mention of Robert Downey Jr. and how Bossy blogged about him herself today.

Hi Bossy. RDJr. is delicious, at least I think so. :-) Thanks for stopping by, I'll come and check out your post. Us RDJr. lovers have to stick together (while beating of Josh with a stick). Well, not beating off Josh. Argggh. Forget it. David can distract him. :-)

What? What? *looks around in confusion* Stop being such a wimp Chris. Uncover those eyes and face he music.

While you're beating David off with a stick (sounds excruciating!), I'll just sneak off with RDJ. :)

No, no, I'm beating Josh off. LOL It does sound painful but maybe he'll like it. Who knows? Keep your paws off RDJr.

Damn. My veri word knocked my witty comment right out of my head: