Saturday Reading - It's Cold out There 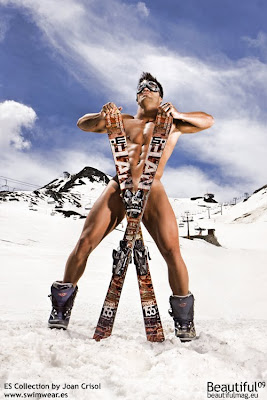 I dare this sweetie to come skiing here today wearing this outfit. He will truly understand the term shrinkage. It's -22 C (I'll make all the Americans google a conversion site) but the sun is shining, the sun is shining. Was, it's night now. After two weeks of no sun I don't really care how cold it is. Until I have to drive my daughter to lessons tomorrow morning at 7:45. (Who the hell decided 8:15 on Sunday morning is a good lesson time?) I spent most of the day struggling to get a virus off our main computer. Arrgghh. Seems to be better but what a pain. So I actually did most of this reading yesterday as I was doing the other stuff today.

This is the continuation of Adin and Jackson following InDescent which I read Thursday. The guys finally realize that they want to be together but Adin's fucked up sense of honour won't let him leave Celia. Just when he thinks she's ready to part she seems to change her mind throwing Adin off kilter. Also Jackson's friend is trying to get him to find his lost boyfriend who looks like he might have gotten himself mixed up in some voodoo hoodoo. Another adventure for Jackson with tons of info about voodoo and the struggle to be with someone you love. I was very happy with how it ended as I desperately wanted them together as they were perfect for each other. Not so much wizardry in this one but some humour, some REALLY hot smexin' and adventure. Another great read.

I am counting this as one of my challenge reads because although I said 90+ pages it's so haphazard. I checked and there are something like 550+ words per page vs 350 words in the next books but they are twice as long.

This is book 1 in a werewolf series. Joe is the local sheriff of a predominantly were-town. He is called to the scene of a shooting and finds apparently mute Nate bent over the body. He realizes Nate is not the shooter but after he has a seizure he decides to take him home and he realizes he's his mate. Well, seems Nate isn't mute except when he wants to be and he is on the run from someone called the Teacher who keeps various young men with paranormal abilities (Nate can read people's emotions and tell if they are lying when he touches them which is painful except for Joe) captive so he can profit from their skills. Nate has been on the run for 2 years but is willing to take the chance with Joe. Of course down the road Teacher tracks him down and there is a showdown and a rescue of the other young men.

It's pretty typical Stormy Glenn and pretty typical werewolves. I do enjoy reading her work but it's an easy read, it doesn't take much brain power, you know where it's going but the characters are likable. Yes, it's insta-love but I can live with that in a werewolf story. However there was at least one glaring error. They are going out for their anniversary dinner and several times they mention 2 months. But much is also made of the fact that on the full moon the guy turns into a wolf/human hybrid and has wild sex with his mate. So I figured if it's two months they've done this, but suddenly during dinner it says it's their 3 week anniversary and they haven 't had full-moon sex. Umm. 2 months or 3 weeks, someone decide here. That really annoyed me and I even vented to my daughter. Lazy editing I think. But as I said, quick easy read, kind of like Doritos, not high class food but you enjoy them while scarfing them down.

This is book 2 in the series. Straight alpha Quilliam Reese (who is usually referred to as Reese and it took me forever to really grasp his first name) is at the bar checking out the chicks when he sees an adorable guy come in and head to the bathroom. He also sees someone follow him and despite his better judgment goes to the rescue. Seems there are vampires who coexist with the weres and for some reason Reese feels compelled to save the guy, not only save him but he bites him and mates with him right there in the bathroom. So he basically kidnaps Keely and takes him home with him having sex (first buttsecks ever) in the truck. Keely is one of the captive guys from the first book although you only meet him here. Keely is waving the rainbow flag high, adores wearing nail polish, has a feather boa, etc. Despite himself Reese falls in love and loves Keely as he is. However there is some weird shit going on and Keely is attacked by pack members and it has to do with supplying the vampires with were blood which is an aphrodisiac.

Keely was a great character. When Reese and Devlin his beta who lives with him have a fight Keely goes nuts on them with the cookie sheets and isn't afraid to voice his opinion. It's also Keely's friends who manage to save the day at the end of the day. There were no blatant errors like the last one but one things is they have this knot in their penis that locks them with their mate a la dogs. But they talk about the knot being at the end of the penis and that it stimulates the prostate. Okay, I'm not all up on my male anatomy, but I thought the prostate was located only a couple of inches inside (I could google this but I'm lazy - I've seen enough videos to fake it), and if the guy has a typical romance penis it is at LEAST 7 inches, probably more. So if the penis is full lodged in the guy's ass with a knot at the END, then there would be zero prostate stimulation unless it was at the BASE like a canine (or similar to a butt plug) where the stimulation would be greater. I don't know, if you're going to use animal traits, use them right. But hey, it's not my world.
Posted by Tam at 7:26 PM

I hope that guy's wearing a cashmere jock or something...

Conversion site? Nah - you just type -22c in f in your little google searchy thing in firefox and there you are. Works like a calculator, too. Anyway, it was -26C when I got up this morning, but now it's a toasty -18C.

LOL about the knot! Protates in m/m must be like hymens in m/f - mysteriously located wherever the author deems, not where they are in reality. Anyway, I have the same reaction to reading Stormy Glenn - not great, but decent enough that enjoyment outweighs annoyance.

D'oh. I do actually know how to spell prostate. Really.

You're a mad knitter aren't you? Maybe you can volunteer to make him a little penis scarf.

So you're shivering too huh? Winter sucks.

I'm pretty go with the flow but some biology facts you pretty much have to stick with reality.

Hey Chris! I tried that degree thing in the googly bar. How cool is that?

And geez, Tam, you are so darn picky! Could the knot be hitting the prostate as it passes while pumping?

But, at least in canines (my mom had a kennel, raised collies, blah blah blah), after the knot forms? No moving - they're locked together.

Isn't that handy, Wren? So much easier than finding a conversion site.

My goodness Chris you are a font of information. Have you ever thought of writing a blog? (Hahahaha)

The google-fu, it is strong in this one. That is all.

Hi,Tam, I did the conversion. Minus 7? Whoa, it is cold out there! Where I am, we tend to panic if it gets to 20F (and you can convert THAT, ha, ha!) I think the clear winner here is KZ Snow's book. Great reviews on all three. I like to know about weird mistakes like the ones you pointed out on the second two.

Adin and Jackson have a sequel? I'll have to get that for when I read InDescent. It sounds good.

Like Doritos huh? Makes sense. I do like Stormy's books. Usually delivers a quick fun story although with a few errors as well.

I'm too lazy to convert right now. We are in the low 20s F tonight and that is freaking cold for Florida. I don't even want to imagine how cold it is where you're at. Brr!!!

Have a great Sunday.

See, I knew I was right about the canine thing. They didn't move, just claimed it pressed on it. Ha! Validated by Chris' knowledge of dog sex.

You're right, sometimes a Stormy Glenn story hits the spot, just not the prostate. HAHAHA!

Val: KZ's stories were definitely the highpoint this week. I am usually pretty flexible about small errors but the glaring ones do annoy me because SOMEONE should have noticed that.

Lily: I know you guys have been freezing and causing the farmers much grief with spoiled crops. The price of OJ will be skyrocketing soon.

Chris: OMG, that is exactly it. Get knittin' girl. I'm pretty sure the large size would be required, I'm hoping anyway. :-D

As the unwilling assistant in kennel operations, I might've grown up with some confused concepts of what would actually happen during human sex. *blink blink*

Chris - why is it that those penis socks look like jalapeno peppers to me?

I can't wait to read the KZ Snow book! And the Stormy Glenn's...haven't started those yet but will look for the glaring error and report back. lol

Hi Tracy. I'm sure you'll find other errors I likely missed. It's going to be +2 on Saturday (34F) Woohoo. What that really means is wet slushy ugly mess. Sigh.

So as I'm reading the Stormy Glenn I'm thinking that the two have been together about 4 weeks when they got out to dinner, from what's been said. When Joe says 2 months, I'm shocked. Then when Nate says 3 week anniv. I'm laughing.

So how the hell did Roger know about Nate and how to find the Teacher?

It was cute though - could have done without Joe calling Nate baby with every sentence, but hey, whatever.

Stormy Glenn often has plot holes big enough to drive a truck through as you noted (plus editing issues) yet the characters are all appealing enough that in the end you kind of enjoyed it. :-)

Yeah, not sure how she manages to make that work and not have it drive me batshit. :)

It's a skill Chris, definitely a skill.