I seem to be slowing down in the reading department again. After my Mom shows up on Thursday for a week it will be next to non-existent. *sob* Oh well, I'll binge after. 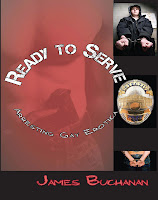 This is an anthology of stories involving law enforcement officers in some capacity or another. There were 5 short stories and one longish story at the end. I really enjoyed them but I've yet to read a James Buchanan story I haven't liked. I think my favourite was Coyote Crossing. I was wondering how it was all going to work out and it caught me by surprise which is always nice. I liked the characters and how it all played out. Plus the illegals sneaking over the border thing is always a novelty for me, not being an issue where I live. I wasn't sure about the last one, Fairground, but the more I read it the more it grew on me and I was quite happy with how it went as it moved to the end. So if you like stories about cops of all types, it's a great anthology.

Everyone has raved about this, 5+ stars, etc. and it's been in my TBR file for awhile and I was kind of afraid to read it. It's not often that a book lives up to the hype even from people I trust. But ... yes, it did. I really enjoyed it and spent too much time reading it when I should have been scrubbing tubs. (Tonight, I swear, I'll do them tonight.) I liked that while it was straight guys turning gay (not really but you know) and they did angst over it a bit, there wasn't a lot of self flagellation. Yes, they acknowledged it was weird that suddenly after 35+ years they found a guy attractive, but they realized the relationship was more. I also liked that Matt had an experience with another guy so it wasn't just a GFY, but "maybe I'm bi" kind of thing. Okay, I know you're not supposed to have sex with anyone but the love interest but he'd dumped him, he was entitled. LOL But I could see why Evan would freak as well. On the whole I thought it was great although I would have loved to see his in-laws reaction when he told them, and then his SIL brings home the black guy. Yeah, that would be worth it. Now I must get James' story and see how his life turns out.

This too has been in my TBR forever and I didn't read it. Why? Because then I could pretend it wasn't over and I wasn't sure how it was going to end if I'd like it. LOL No one hates a series to end and go "Well, that sucked." But it didn't. Although I'm telling you I was getting squirmy a few times and thought "If she goes there I am going to be soooo pissed." but she didn't and I forced myself to read on. I liked how it switched back and forth in time and I think it had a good ending although really, it's still wide open. I hope someday down the road we get a little taste of Michael and Wild Bill say a couple of years later. What are they up to, how their lives changed after this dramatic last book. A reader can hope right? Sigh.
Posted by Tam at 3:19 PM

I really must read the Price and the Buchanan. I keep saying I'm gonna read Buchanan and have Cheating Chance but still haven't read it. Ah well, one day.