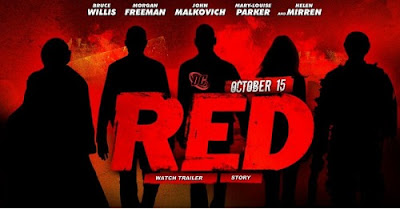 Last night my daughter and I went to see RED. The movie is about Frank (Bruce Willis), Joe (Morgan Freeman), Marvin (John Malkovich) and Victoria (Helen Mirren) who used to be the CIA's top agents - but the secrets they know just made them the Agency's top targets. Now framed for assassination, they must use all of their collective cunning, experience and teamwork to stay one step ahead of their deadly pursuers and stay alive. To stop the operation, the team embarks on an impossible, cross-country mission to break into the top-secret CIA headquarters, where they will uncover one of the biggest conspiracies and cover-ups in government history.

That blurb pretty much sums it up, but of course Frank, whose life is BORING, has been tearing up his pension checks just so he can phone the person responsible for his file and chat with her (Mary Louise Parker). When he realizes they have been shadowing him, he knows they'll go after her so he goes and picks her up to keep her out of harms way. She is NOT impressed, his use of duct tape on a "first date" is liberal, but of course she finds the whole spy thing wildly exciting, just like the romance novels she reads. :-) After that it's a roller coaster ride of explosions, bullets, disguises and one liners.

This is not a serious movie, there are MASSIVE plot holes, but it is certain a fun movie. John Malkovich is hilarious as a freaked out ex-agent who had been experimented on with LSD for eleven years. Very very fun, the pig. Ha! (you'll have to see it now to know what that's all about) I told my daughter I think I would be afraid to be alone in a room with him and Christopher Walken, they both appear totally whacko. They should make a movie together.

Is it wrong that I still find Bruce Willis hot? Okay, just pretend I didn't say that.

Helen Mirren? Total girl crush, and I want to BE her when I grow up. I was thinking she must have had a blast as she usually plays more serious characters and she was shooting machine guns and seemed to be having a great time.

The inside assassin who is an up and comer in the CIA was played by Karl Urban and he was good I suppose in that I didn't like him at all. He was totally a "just following orders" kind of guy until he finally opened his eyes at the end.

So if you are looking for a light hearted romp, with some laughs (and a few groans), with totally implausible explosions and escapes, it's the movie for you. We had a good time and sounded like others in the theatre were also enjoying it.
Posted by Tam at 12:46 PM

Sounds fun!! I used to watch a lot of movies from Hong Kong, which tend to have lots of plot holes, so I'm pretty with just going with the flow of an entertaining movie.

That's exactly it Chris, it's a go with the flow fun time.

Bruce Willis is hot? So next are you going to tell us that Stephen Harper is "kind of adorkable"? I may still consider watching it despite Willis - Dame Helen with automatic weapons sounds like a good time. Also, since you brought up Christopher Walken, I highly recommend "Scotland, PA". It's Macbeth as a comedy noir, updated to the 1970s and set in central Pennsylvania.

I'm sorry Mel. LOL What can I say, it's a weakness. And no Stephen Harper will never be adorkable, that's an insult to Craig. :-P

That sounds like a good one Mel. I'll have to check it out.

I've wanted to see this since I saw the trailer with Dame Helen kicking ass. Thanks for the review, Tam!

I'd second "Scotland, PA" - as long as you know a little about Macbeth!

John Malkovich is hilarious as a freaked out ex-agent who had been experimented on with LSD for eleven years.

I think you'll enjoy it Wren. It's a very fun night out.

I remember some MacBeth from high school, so I can probably fake it. :-)

Oh, he was PERFECT Val, exactly as I would have envisioned the character. It was a fun time and the first time I've been to a movie with a nearly full audience in .... ages. Guess not everyone could get tickets for Jack Ass 3-D. *eye roll*

I've been seeing posters all over the place of this film, mostly with Helen Mirren aiming an automatic weapon. When I first saw it I thought 'WTH?' but it's certainly a good draw isn't it? Sounds great fun. I'll have to pick it up when it goes to DVD cos I never get to the cinema these days.

It's fun to see her in a kick-ass role Jen. Definitely watch it on video when it comes out.

Kris SAW Helen Mirren in the LA airport yesterday. I am SOOOOO jealous. :-)

I need to get to the movies, the last one I saw was Clash of the Titans.

I'm lucky my daughter takes me with her to some Stephani. There hasn't been many I've wanted to see lately but it's getting to that Christmas season with lots of movies.

Sounds good and like you I think Bruce Willis is still pretty hot! :)

Thank you for validating me Lily. LOL

I'll third "Scotland Pa"! wonderful film. And do you know, Tam, that were but five minutes from Scotland PA on your trip down I-81 to here. :)

Yeah, it's got plotholes so big you could fly a 747 through them, but it's so much fun, I didn't care.

Helen Mirren? Awesome! I'd totally do her!

Glad you enjoyed it!

Sigh. Lily and I are going to share Bruce then. More for us. :-P

It was fun, not the type of movie you try to see the logic in. Helen Mirren is amazing.