Okay, I'm staring in reverse a bit here, but I'll go back a bit.

Monday after a lovely brunch out with my friend Mel, we headed to Boston. We bought trolley tour tickets since they were good for two days, and rode the entire route Monday afternoon. Tuesday morning we went on the harbour tour, then went to the Faneuil Market which has a gagillion food stalls and little stores. It was soooo hot though, we got pooped out and went to the Aquarium where we knew it would be air conditioned. They had a special jelly fish exhibit and those jelly fish are live in a tank, very cool for us land-locked folk.

Tuesday night we went to Cirque du Soleil's "Ovo". You must go when it comes to Amsterdam Janna. It was so good. But then I've yet to see a Cirque show that wasn't. We were dazzled by the Grasshopper guys on trampolines and the trapeze artists were amazing. We go nearly every year to the new show in Montreal and probably 75% of us at a Montreal show have seen nearly every show that comes through. I don't want to say we are jaded, but to hear the enthusiasm of a crowd who's likely never seen a show before was kind of an eye-opener. They ARE freaking amazing and we should appreciate it like the first time we saw them. 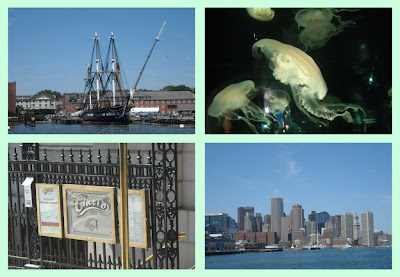 Wednesday morning we headed down to Cape Cod. It was perfect beach weather so we hit one of the beaches. It was very windy and blowing sand HURTS, but my kid actually went in 62 degree water (16 C). It actually hurt when you first got in it was so cold. I got to almost my knees, that was plenty far enough. The beach was gorgeous pale sand and just went on forever. Oh and who can resist cute boys who read at the beach. Oh yeah. :-) I was enjoying the scenery. 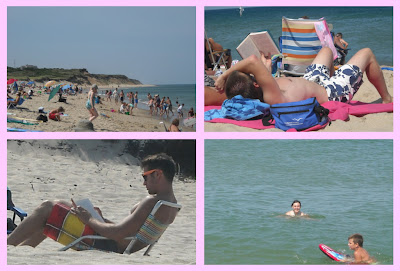 Thursday (today) we got up bright and early to go whale watching. I was a bit concerned because it was overcast and TWICE my whale watching efforts have been thwarted by fog, but we headed out on the boat and it rained a bit, but as soon as we got to the whale watching area it stopped. We saw several Humpback whales which these pictures are of. There were also several Minke whales but they stay far away. There was even a mother and calf. The staff know all the whales' names by their traits so it was very cool. The one in the upper left was RIGHT beside the boat, probably 20 feet out and we were in the right place to see it. We also saw a tuna jump out of the water which was kind of wild. So I was VERY happy with our whale watching experience. I can die happy now. :-) And poorer. NOT cheap. But so worth it. 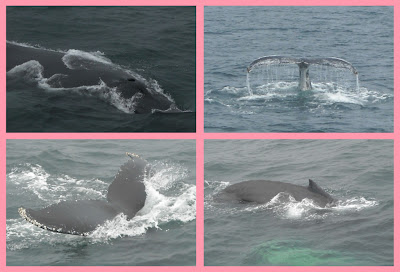 Tonight we are in Providence, Rhode Island. We met up with my friend John who took us to the Cheesecake Factory for dinner. MASSIVE portions and divine cheesecake. We then sat and talked and talked and talked. We are just kind of vegging and I want to go and do some laundry in the morning and then we're leaving for Long Island and Craig's pool party where we will meet up with some old friends and some new, at least new in the face-to-face sense. It's kind of nice to have an evening to relax and sleep in a bit tomorrow.

So far it's been a great trip, despite getting slightly lost in downtown Providence. LOL I do much better with a map than verbal directions. I appear to be a visual learner. :-) Hope everyone has a super weekend.
Posted by Tam at 9:26 PM

I'm so glad you got to see whales!! It's an amazing experience, isn't it?

Mmm... thanks for sharing boys reading on the beach with us, too. :D

Tam, what fun! Especially the whale watching (with the bonus tuna, ha, ha!). Good thing you took the trolley around Boston -- it's supposed to be one of the worst places on earth to drive around in (aggressive drivers + confusing one-way streets = massive stress). I think your kid is brave to get into 62-degree ocean water. That makes me feel chilled just thinking about it. :)

It was so cool Chris. I'm so glad it worked out. The top reading boy was about 5 feet from us, very hard for me to concentrate on my own book. :-)

I have no clue why the tuna was jumping around Val, but it was quite funny.

I didn't find getting to our hotel which was right on the Boston Public Gardens, one block from the Boston Common all that difficult but I didn't go further downtown. The trolley driver did say that using your signal light is a sign of weakness and I think our taxi driver to the Cirque learned how to drive a cab in NYC. LOL

I'm not sure brave is the word I'd use for my kid. Crazy maybe. :-0 There were lots of people in the water though so she wasn't alone.

Sounds like you guys are having a totally fabulous time! Thanks for sharing the pics.

The jellyfish look so cool and the Cheers sign, totally awesome. I loved that show!

LOL I'd be taking pics of the hotties reading too. Over here the out of towners on vacation will go into the ocean/lakes/rivers at any time. Crazy people! :)

The whale pictures are great. My sister saw them on her trip to Cali and loved the experience.

Enjoy your night in and I hope you have a great time at the pool party.

Awesome pics, Tam. I love watching whales and dolphins. They are so very graceful; however, you girl child is certifiable swimming at that temp. *shudders*

You can actually go to the Cheers bar Lily. We didn't but you can. :-)

So far things are going well although we had a little tiff in the mall tonight. Shopping. Yep. You guessed it. She did manage to find a red polka dot sun dress she liked so that cheered her up. Once she finds something she's good but ... Otherwise we've been getting along great. :-)

Dolphins in the wild is next on my list Kris. The whales were beautiful.

The kid? Yeah. Insane. It was soooo cold. It felt okay once you were used to it, but I was NOT prepared for the pain of getting used to it. LOL

Sounds like fun. And so relaxing! I've always wanted to go whale watching but never have. Maybe someday. :)

Great photos - and wow! Whales! That's something I'm unlikely ever to see.

I love Boston. Your pics have made me so nostalgic for that city. It's one of the few places I've been in the world where I really thought I could live and be happy.

16C water is cold? Hah! You should try swimming in the North Sea as I did every year as a child/teen. That would put your nice warm Atlantic into perspective. Lightweight. :)

Thanks for chronicling your vacation, Tam ... I think. ;-)

You should take your girls Tracy. It's great fun.

They have whale watching in SF Jen. :-) Depending on what whales are around in October and if there is a sure thing on sighting them I'd love to go then too. So you just never know. And yeah, wimps are us. I'm more of a Caribbean type girl. LOL

You managed to sum it up nicely KZ. Guess the green boys were appropriate for you then. ;-)

We are having fun, get to meet up with some friends later today so am looking forward to that.

Really? There're whales in SF - squeeeee!!! Best tell Kris to put it on the itinerary :)

Dinner was gigantic! But man that cheesecake was gooood. Again, I had a great time meeting you both, so glad we got together.

Good luck on the rest of your trip!

It was great fun John. We've missed you tonight as we dish the dirt on everyone. Had a super dinner with Michelle, Harry, Polt, FDot and Craig.

It sounds like everyone had a great time from the few messages that I've read. I can't wait to read the full reports.

It was so much fun John. We missed you. Hopefully I'll get something up soon.

I was totally amazed by them EH. Worth every stinking penny I paid. :-)

Oh my, Tam. I love those Cape Cod pix. I wonder if I could place an order for the one in the bottom left in the beach chair. *fans self*

He was a cutie Justin.