Seriously people, this part of the country is just so damn quaint I need a dose of inner-city grit and grime soon or I'm going to go into a coma.

We made it to Maine with little trouble. We stopped in Montpelier, Vermont for a minute. A) because I needed gas, B) because the kid was starving and C) because one of my all-time fave m/m books Hot Ticket by KA Mitchell is set there. Squee. Okay, I assumed we'd hit the usual suburbs for gas and a burger but you end up right down town (there are no suburbs it seems LOL), which was so damn quaint I almost died and started demanding the kid take pictures of every freaking cute building in town. We couldn't stay long, but I said to my daughter we should come back for a long weekend because the whole place is just adorable. The white building the columns is the State Capital, I have no idea what that other building is but it was nice, and everything just looks like a movie set of the classic New England town. 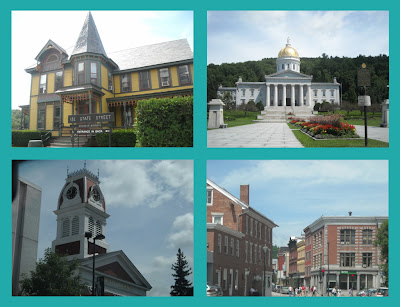 So unfortunately we had to whip out of town and the rest of the way to Maine wasn't bad until we hit grid-lock on the I-95 at 2:00 in the afternoon on a Saturday. WTF? But we made it and the quaintness continued. Some of the house's near Mel's place in Kittery, Maine are just GORGEOUS and expensive he tells me. If you have $2 million or so kicking around you can own a classic New England looking house on the water. And look at that lighthouse? It screams post card. 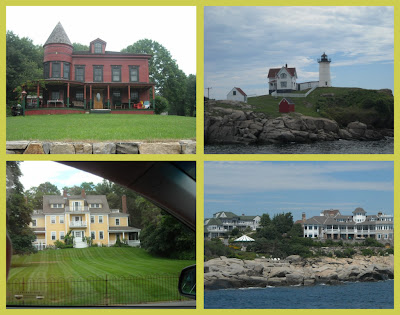 Saturday afternoon we went to a local park area and the tide was out so we were able to go waaaaay out on the sand and see all the snails and sea weed (gag, that stuff stinks). You can see it was pretty grey and dark but it was wonderful to walk way out. Today we went to the lighthouse and the tide was in. Someone asked me to take a picture of her and her husband so I got her to return the favour and got one of the few pics of me and the kid. It was much clearer and the ocean was bluer and it was rushing in. Got our feet wet once when a particularly big wave came in. We have some lovely ice-cream there. We also passed by the local beach to get there. a gazillion people on 5.5 feet of beach since the tide was in. LOL And we thought the water was cold but lots of people in and hundreds of apartments and hotels right across the road from the beach. Quite the touristy area. 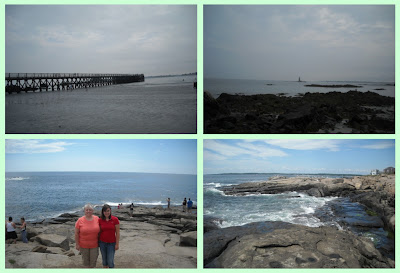 My friend Mel and his husband David live on a farm, and today was "open farm" day in Maine. They kind of share the farm with the alpaca farmers but it's all one big property more or less. These are Mel's sheep Angus and Sean Ferguson. Oh we saw this deer at the park the first night. We walked right up until we were about 20 feet away and it just looked at us then turned and walked into the woods. Very cool. The kidlet with Mel's dog Tuck. She sat on the floor and he crawled right up into her lap. And of course two of the alpacas. 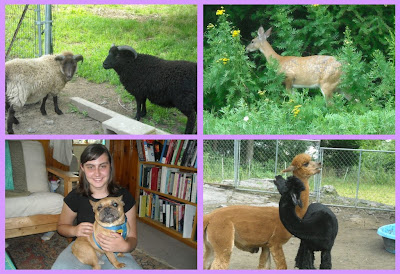 This morning we went to a civil war encampment reenactment at the local fort just down the road. They were shooting off their guns and all dressed in their costumes and had a camp set up you could look around in. Kind of cool and different.

Mel has had to work this weekend so we haven't seen him and Tuck, but David has been great about making sure we didn't get lost and explaining all about alpaca farming and wool. We went for Thai food last night and there is a great wood-fire pizza place we are going to check out tonight. We went to a place called the Bagel Caboose for breakfast, because who could resist a train caboose that sells bagels? I found a huge area of outlet malls and I forced the kid to try on jeans. Sigh. I paid the price for that.

We've just kind of been relaxing this afternoon since we got back. It's really hot here today so it's kind of hot to go out, although it looks like it might rain later. We are heading to Boston tomorrow. We are going to wait until Mel gets home in the morning and spend some time with him and then head down. Boston hotels are SOOOO expensive, but we're only staying two nights so that will be our splurge. Looking forward to the rest of my trip.
Posted by Tam at 4:36 PM

Sounds like your trip is off to a great start! :)

So far so good. I hope I haven't jinxed it by starting out well, but I don't think so. Last year started poorly and steadily improved, but I think maybe we'll be on an even keel this year. :-)

I also feel like chanting 'take it off, take it off' for some reason. :P

They do look like the houses witches would live in. Rich witches obviously.

You keep chanting and we'll keep hoping the next picture shows up on Tumblr. :-)

It sounds like you two are having a great time. Keep sharing the pictures! I'm vacationing vicariously through you. :)

So far so good Eyre. :-) When David gets back from buying cat food we're going to go and check out some more quaintness and then get some pizza. Yum.

That red Queen Anne is one my favorites. I would love to get a look inside one of these days.

Enjoy the pizza! David & I were really excited to have good pizza locally.

It was delicious Mel and we ended up with a whole pizza leftover so we have our lunch for tomorrow. :-) I love a thin pizza with crunchy crust.

Something is wrong when I am sitting in Mel's own house communicating with him on-line. LOL In person tomorrow.

Yum!! CJ came over last night and we had gluten-free pizza delivered by a superhero (Apathy Man), along with gluten-free beer.

I love my neighborhood. :)

Happy to hear you're having a great vacation. Those pics are awesome. I love the architecture up North.

That's a great picture of you guys by the water and the Alpacas, OMG, so cute!

We are having fun Lily and yes, alpacas are the more adorable things. Their long necks and little heads are just so cute.

I'm tired just reading this - but you both look like you are having a great time...

I love the quaint towns - but I do get you about missing the concrete jungle when it gets too much...

What great photos. Tuck is such a cutie (and so is Kristen!). Hope we get to see a pic of you and Mel (that boy works too hard/much).

I do have a picture Michelle. Kristen says "Do you want a picture to prove that you met?" Oh yeah, I guess. LOL He works such crazy hours I'm surprised he manages to get any sleep at all.