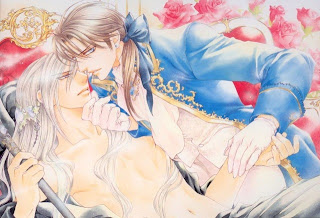 So I recently received Crimson Spell 1 & 2 from Tracy and finally opened Black Wade. It was so nice and fresh I hated to open it. I had 20 min. at lunch during training so I was sitting at my table and I whipped out Crimson Spell 2. (Don't people realize if you have a book open they aren't supposed to talk to you?) Anyway this older guy (65) I work with was also reading and the conversation goes like this:
Him: So what are you reading?
Me: Umm. It's a manga book for adults. It's Japanese, well, not in Japanese, but originally.
Him looking at the cover: So is it like old style comic books?
Me showing him the 18+ rating tag: Yeah sort of but definitely for adults.
Him: Oh, so it's really explicit?
Me: Yeah.
Him: Oh really.
LOL I'm sure he assumes it's m/f but I just let it go.

I enlightened him as to the Book Depository. I know he reads a lot. Then the yappy woman at my table goes "Ewwww. That sounds awful. I wouldn't buy a book there." It's depository, not suppository. And for free shipping and amazing delivery I'd buy from something called suppository and tell the world about it. Sheesh. How old are you? 12?

So comic days at my house (and on the bus and at work).

Everyone (aka Kris) bullied me until I bought this. Freaking expensive but Book Depository is amazing. About $10 cheaper than Amazon and actually had it in stock. Jack is in the British navy when he is taken captive by pirate Black Wade (BW). BW has his way with him and eventually Jack gets with the program. When BW feels himself getting attached he sets him free. Jack is about to marry his fiance he finds out BW has been captured and is being abused (aka raped). He can't stand it, frees BW and they sail away. I assume there is room for a sequel as another Navy guy was pretty pissed, maybe that ship they stole did it. So was it amazing? The story was okay and if you have serious issues with non-con depicted or dub-con, then there might be issues but the artwork is freaking amazing. It's not like old Superman comics, the inside is as beautiful as that cover and yes, VERY explicit. I paid about $22 at BD, but it's hardcover and just gorgeous.

Everyone has been raving about these so I was eager to get them and see what all he hubbub was about. Vald (who I keep wanting to call Vlad) uses a sacred sword to protect his kingdom being attacked by demons. Unfortunately the sword is cursed and he turns into a demon when he gets angry or is asleep. He must go and find Halvir, a wizard who can maybe break the curse. They start out on an epic journey to find a way to break the curse. Halvir (Havi) finds that he can tame the inner demon of Vald with his magic cock. :-) But when he's human again he can't remember. After a few adventures Havi is captured by an evil wizard who wants to use Vald for evil. As mystified as he is by his feelings for Havi he knows he's his and sets out to rescue him. End book 2. So I can see why everyone is looking for Book 3. I want to know what happens. The story is compelling and I love the artwork style and Vald gets tattoo type marks all over his body when he's a demon. Sigh.

The top picture is by the same artist/author. I wish these books were as much in color as Black Wade. I would pay lots for that. This author is going to be at Yaoi-Con in SF in October which is suddenly more appealing to me. I told my daughter and she goes "So are you going to get the book autographed?" Hmmm. I might have to invest. :-) I have to say for yaoi I tend to find the fantasy ones more appealing which is the reverse for me in m/m where I don't care for fantasy as a rule. Maybe I'm more visual for created worlds and monsters. I highly recommend.
Posted by Tam at 2:00 AM

I know I'm Teh Awesome, but I didn't realise I was Everyone too.

Your influence knows no bounds hun.

I think the blog may have eaten my comment? Just saying I enjoyed both of these, too. CS is the only yaoi I've ever read -- very trippy having to read right to left, which I eventually figured out I should do, ha, ha! I think my subject matter preference would be just like yours: fantasy for yaoi, realism for m/m fiction.

I have a yaoi which is read left to right like a Western style book and to be honest I had trouble with it because my brain really wanted to go in the other direction. I found my eyes wandering right to left and I'd have to go back and do it in the correct order. Same with Black Wade. LOL

We must be more visual Val. We like the pictures of fantasy to help us build that world.

Oh my training was cancelled because when I got there this morning they had called the paramedics because they thought our instructor was having a heart attack. He must be in his late 60's or 70's so it's quite possible. Kind of scary but now I'm back at the office. Oh yeah. (Can you sense the sarcasm?)

I'm still figuring out what my preferences are for yaoi. I think ones that don't leave me completely confused at the end. ;)

Although I've heard Black Wade is great I'm not a big fan of yaoi and manga even less.

It's not for everyone Lily. I'm actually surprised I enjoy it as much as I do.

As a new convert to Yaoi, I am still feeling my way around. I read the scanlations of ALL of Ayano Yamane's mangas... *sigh* so beautiful. Sounds like I am going to have to try to get my hands on Black Wade - color all the way through - SWEET!

I did just get my hands on A Foreign Love Affair... *sigh* soo pretty...

The color all the way through is so nice Miranda. Expensive for that but it's like a book of art ... that you can't share with too many of your friends. ;-)

I'll have to check out A Foreign Love Affair. Sounds nice.

Black Wade has been on to be buy list ever since I found Kris's blog. Overall did you think it was worth the price?

For the artwork yes, definitely worth it. It's beautiful. The story? Meh. It was fairly typical. Pirate rapes captive, they fall in love. Remember Johanna Lindsay back in the day? LOL I wouldn't pay $30 for it but at BD it was probably worth it.

LOL "...Johanna Lindsay back in the day..." OMG, that is what I got started on! Guess I shouldn't be so surprised Yaoi is something I like!

Hahahahahaha! The Book Suppository! But hey, if were possible to invent such a thing, imagine how quickly people's TBR lists would go down. Just shove in the encapsulated books and absorb them!

Buuwahahahahahaha! (Oy, spring fever. What can I say?)

Which I bet is handy for an author. ;)

Problem is, sometimes it goes into overdrive and makes me drop letters and words. Doh. (Tam, hire a proofreader for your blog, would you?)

I love both of those books muchly!!!

But I'm typing most blog entries with dysfunctional F and H keys KZ so if anyone needs a proofreader it's me.

They were good reads Sarah. Hopefully Crimson Spell 3 will be in English soon.

I love both of those books - I especially love the colouring and pencilling on BW... most perfect...

Crimson spell - I am trying to bribe my friend to translate the thrd book for me - She insist on saying no - but I will wear her down...

As for the heavier colouring and pencil style...
I remember this question being asked once at one of these graphic things I go to - it's to do with the cutural "face" thing - not too dark, even if the material itself is heavy, the style must be either flourish as in CS or flat, just plain manga...

Not sure if I am explaining it properly... But the long and th short of it - is that you wouldn't find a BW atyle of pencilling on a CS material...

I think Crimson Spell 3 is in German. You'd think the translation to English would be fast.

I know CS wouldn't have the same look but I'd love to see it all in colour instead of only the inside page and the cover. I think it would be beautiful.

Where is te first image from?

It's from the Crimson Spell by Ayano Yamane. Not sure which book but I know it's by her and from that series.