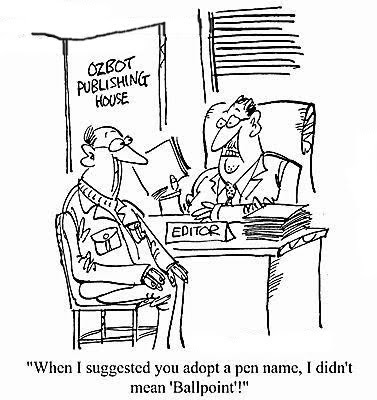 I haven't been reading much lately, I've been working on some other stuff but I've been thinking about this. Pen names, nom de plumes, aliases, whatever you want to call it. Not about whether authors should or shouldn't or the choice of an ambiguous gender name vs one that clearly states sex. But about the process of how people choose names.
There seem to be a lot of .... creative names out there. Some examples: Sapphire Blue, Mynx Malone, Roxi Romano? Also some very unusual first names, some of which I have no clue how to pronounce: Taige, Ciar, Mlyn, Cyna, Kaenar, Kama, Talya, etc. Granted, you are unlikely to forget an author named Mynx but I seriously doubt her mom named her that.
So then I started thinking (not always a good thing); What would I call myself if I wanted to use a nom de plume? First would I need one if I chose to write an m/m story? Okay, there is stuff out there on the internet with my name on it, generally only my first name but my e-mail is also flying around out there with my real name on it and it's associated with the on-line me so it would take an 8 year old about 4 min. on the internet to figure out who I am but we'll ignore that for now. What would I have to consider when making the decision:
So in general I don't think I would need a pen name but it's fun to imagine. So what would I choose? I would try and avoid the stripper names like Glitter McLeggie or something too cutesy like Sunny Dayes or Royale Icing. I always wanted to be called Tabitha like that little kid in Bewitched. So I'll be Tabitha .... Hmmmm. My middle name is Lee. But then people might think I'm Asian but I suppose if I'm trying to hide my identity it would be good to throw off the scent with an ethnic name when you aren't of that ethnicity.
So there is my imaginary nom de plume. Tabitha Lee (Royale Icing is a close second) If you use a pen name can you share with us how you chose it? Not if it will "out" you but I'm always curious how people come up with names. Just a fascination with a name like I have, or maybe a favourite book or movie character? Your maiden aunt's name. Random name generator? If you had to create a pen name what would you choose? You can be as wild and out there as you like just for fun.
This is how I imagine all those unknown authors looking when they're working on that next story. Very mysterious. 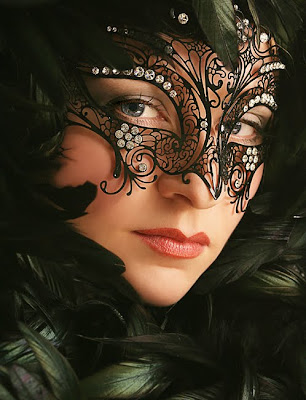 I'd advise against picking anything too exotic and hard for people to remember how to spell when they get the impulse to do an internet search.

One thing to consider that I just thought of -- if someone's thinking of picking a pen name, they could always pick one at the top of the alphabet like Addison or Adams because then they'd show up first on every listing!

Ah yes, the alphabetization game. Good point about spelling too. Even with a name like McLean, then you start to go "Is it MacLean?" Maybe being a Z name would be good as well, you wouldn't get lost in the middle of the alphabet. Zora. I worked with a Czech girl named Zora.

Tabitha Lee sounds like a great name and has the added benefit of not really sounding made up. But are you sure you want to pass up on Glitter McLeggie or Royale Icing? ;D

I was thinking I could spell Icing with a Y, Ycing (like the hockey player Steve Yzerman) just to be cute and trendy but then people would probably probably pronounce it WHYcing and really, who wants your fake name mispronounced all the time? Which is why I don't understand some of those first names I listed. How the hell do you pronounce Taige. Does it rhyme with cage? Is it like tie? Silent e? What?

Oh and I got those author names from a real e-pub site. I didn't make them up. Honest.

Oooooh, I love Stevie Yzerman. I would buy your books just for that. I have a friend that says you should use your first pets name and the street you lived on as a kid.

On a personal note, I've always used my real name. My son is a junior in high school and all his friends know what I write. He's never got any flack for it. Most of my small town know about my books, too. I've only received one nasty note and that was from an old classmate from the Christian school I graduated from.I do understand why other authors chose to use pen names, though. For example, I know of two writers who also work as teachers at private schools.

Lassie Country Road #12? Ummm. Not so much. LOL I'm not sure Lassie is EVER a good choice for a pen name. Unless you're Scottish maybe.

I know there are writers who have to be very careful about revealing their genre which I find sad, but it's a fact of life so you do what you have to do sometimes.

Tam, however did you find my picture??

I Googled "sexy exotic m/m author" and poof, there you were. :-)

Hmm, Misty West Central isn't any better than Lassie Country Road #12! And then there were the Siamese cats (Ping and Pong), and their kittens that my brother named Bing, Bong, Bang, and Bung. (Hee hee!) We lived on Rural Route #2 then... Obviously those rules were made be people who lived in the city and got their first pets later in life!

I'm trying to think of other pet names I've had. Rex, Blackie, Brownie, Orangie (damn we had original cat names), Squeak, Shadow, Sheba. Hopeless. Hopeless is what the names are, we never had a pet named Hopeless. Now I have Max and Vanessa and Bun.

Bun would be an amusing pen name. :)

Some others (grew up on a farm and my mom had a kennel, so we had more than an average number of named animals, most of whose names I've forgotten): Flash, JB (Jet Black), Pookha, Patches, Travis, Thai, Thae, Random, Anthony, Lassie... and, of course, Chaos and Mayhem.

Mine would be Aristotle Corbin, which sounds so stuffy. Like I should be having brandy in the parlor room or something.

Other pet names would be Peep, Reno,Shanahan, Osgood or Zetterberg. Can you tell we're really big Red Wings fans?

Okay, obviously it takes a gay man to know this, but your first pet's name and the street you grew up on is supposed to be your drag name. hence, I'd be Muffin Church.

But if we're doing current pet and current street, then the name would be None Potomac. What's worse, when I lived in the apartment before moving last year, my name woulda been None Third.

i think I'll go with the drag name. Now if only I looked in drag like something than a fat hairy man in drag, i might be able to use the Muffin Church name.

Aaaand once more my comment it totally unrelated to the topic at hand. This place is turning into Puntabulous, isn't it? :)

Peep Zetterberg. That would be a great name Stephani. :-)

Chaos and Mayhem could be a writing team. So famous that only one name is needed, like Cher or Madonna.

My name would be Fluffy Spittal-Hardwick.

I kid you not, we had a cat called Fluffy and we lived on Spittal Hardwick Lane. Unfortunately Fluffy came to a sticky end on that road so maybe it would be traumatic to name myself after those.

My next pet was a budgie called Valerie and we lived on Gannet Close so I could call myself Valerie Gannet.

Dang, obviously that rule was made for Jen!!

I am so calling you Muffin from now on Polt. LOL A little waxing and you'd look fabulous darling.

It can degenerate, I mean be lifted, to Puntabulous levels here some days. LOL

Holy crap Jen. Definitely a rule for you. Poor Fluffy. Valerie Gannet is great though.

Although Fluffy Hardwick sounds really dirty. But that could just be me.

I thought the pet + street thing was to get your stripper name. Now I'm totally bummed that I didn't go with Mitzi Hawthorne. BUT it could have also been Finster.

Mitzi is definitely a stripper name.

I just had to comment, because mine actually *was* based on a maiden aunt! The "Cat" part, anyway (from Catherine). "Kane" was a bit more random, but I pretty much went about creating the pen-name the same way I would with character names -- looking at the different meanings and interpretations.

As for using my real name, the fact I write m/m probably would make my family a little uncomfortable so it's just easier to use a pen-name. I also to share my real name with a minor celebrity, so I always feel weird seeing it attached to my books!

And if I went with the pet + street-name thing, I'd be Twinkle Llyn. Which, come to think of it, is probably more suitable AND memorable than Cat Kane. *laughs*

Ha! Who'd have thought the maiden aunt line would have a basis in reality Cat.

Twinkle Llyn, definitely memorable ... if you're working the stripper pole. I'd stick with your first choice. :-)