We had our Christmas lunch at work today so now I'm feeling sluggish and updating this quickly is easier than anything that requires brain power. 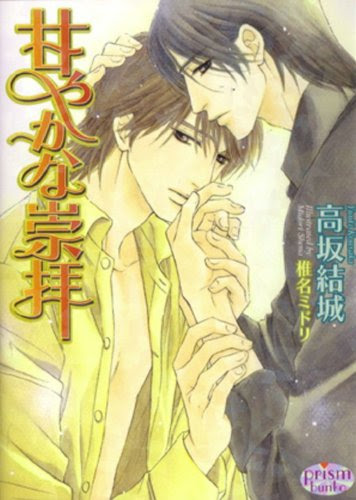 Katsuya has graduated and despite his plans to remain in his small town, he moves to Tokyo on a bit of a whim to work for the company established by the older brother of a friend who spent one summer in his small town. He always had a crush on Shio. He is promised company housing but it doesn't come through and when Katsuya lays down the law, the President forces Shio (an executive with company housing) to share with Katsuya. Shio is NOT thrilled and Katsuya is torn between feeling bad he's putting Shio out and being thrilled to be near him. Can they get past this? Will Shio's little step-brother pull them apart once they start to get to know each other. I liked Katsuya because despite the uke/seme thing, he had a good attitude, he called the President on his bogus offer of housing, he didn't let Shio's surliness put him off, although he did kind of bow to the spoiled brat's pressure. All in all I liked this story although there were certain little cultural things that made me laugh. Because Shio did the dishes he could tell he was a good person. Or little actions that seemed to be evidence of his personality that seemed completely unrealistic. Because he smiled hit meant X. But I think that is very cultural. So Katsuya had a bit of spunk despite Shio's coldness. It's now on the yaoi world tour.

Yeah, yeah, I'm late to the party on this. Give me a break. I'm trying to catch up. Adin is a former vampire who lives with Celia and has a wild crush on his best friend Jackson who is a wizard (and carpenter). At his birthday he comes on to Jackson for a menage but is rebuffed. After talking to Celia she tells him to head to Jackson's and just fuck him and get it out of his system if that's what he needs. So he does. And it's smokin'. The book is basically Jackson and Adin working through their feelings for each other and feeling each other up over a weekend. You really got the sense of the connection between Adin and Jackson, not so much Adin and Celia but maybe that's cause there was no m/f smexin' on screen. She's pretty open about Adin admitting he's in love with Jackson too and being okay with them having the occassional weekend fling and I know where this goes down the road but I'm ready to ditch her. I think there maybe have been m/f books before this? Not sure. Anyway, amazing chemistry between the two guys and I'm looking forward to books 2 and 3 in the series.

John (and actor) and Ben (a musician) have this thing where whenever they are in the same city they get together and have wild monkey sex (best sex ever) but no strings attached. Eventually John starts to realize that he wants strings and Ben absolutely freaks about the whole idea even though he admits sex with others isn't as great and they are best friends. Okay, I like me some smexin' but this bordered on too much for me? Is that possible? Yes. I kind of got that they liked wild animal sex (no lube preferred - ouch) and that everytime they got together was a tinder box of exploding hormones, but I kept reading about it repeadedly. They claimed to be friends who talked about stuff but all I ever saw was sex sex and more sex when they were together. I did enjoy it but like I said, it was on the cusp for me. I really liked John and wanted to bop Ben on the head more than once. You hope they made of a go of it in their business although personally I'm not sure Ben isn't right, that's it's not possible, but hey, be in love while you can.

All I Want for Christmas by Linday Reilly (45 pages)

David (Jewish) heads into NYC to celebrate Christmas with some friends (and get away from the family). While at the bar one of his friends finds a phone in the bathroom and they randomly dial a number and get Nicholai. David gets stuck with the phone and agrees to meet Nicholai and give him the phone. When they meet, Mr. Straight with gay fantasies, loses it and is totally smitten. He agrees to go to Nicholai's Christmas Eve for dinner. He lies to his friends about his "date" and heads over for the best sex ever and the realization that he is way gay. Oh yeah, Nicholai is a vampire from another universe. Umm. Okay, that's a twist and David declares himself in love the next morning. First thing, I should have been totally put off by that because I DETEST insta-love stories. But for some reason it worked for me. Not sure if it's because Nickolai was some kind of alien so there could be a biological thing at work or what, but it didn't really bother me like it usually would. Hmmm. I thought David had a very funny inner voice, he yammered to himself about stuff that was kind of random and on the whole I thought I liked them as a couple although you don't get much of Nickolai's inner thoughts. Oh one thing that bugged me was David's friends are 24, find a phone in a bathroom and figure making prank calls on it is fun. Would you not just turn it in at the bar? I'd like to think my kid would by that time. They weren't 13. But then again the whole story would have ended then if they had. LOL

I haven't read today's DSP, but I head it's pretty porny. :-) Which really isn't making me all that eager.
Posted by Tam at 3:44 PM

It sounds like Obsessed might be the winner here. It's one of the nicest Changeling Press covers I've ever seen! Wish that they could do all of them as well as this one ...

You're right Val, out of those it definitely was the winner. KZ said that at Changeling you can have your own cover made I think or do it yourself, not sure about her's in this particular case. Jordan Castillo Price does her own covers at Changeling and for Channeling Morpheus and Sweet Oblivion they are great too. They certainly beat that computer animated stuff they usually produce. I still think the guy on this cover needs a nipple ring though. :-) Maybe I'll photoshop one in, just for me. LOL

Ok, I'm pretty sure I won't be reading THAT holiday short! Hee hee.

Unless you are getting the whole set Chris I'd pass. It was "okay" but a bit odd to say the least but as I said, I did like David's voice so it wasn't a waste. I'm even more scared to read today's after a couple of comments I've read now. LOL No other-dimensional vampires though. :-)

Hi Tam! I'm a HUGE fan of Jackson and Adin so it's great to hear you enjoyed Obsessed too. I think the chemistry is so good because KZ develops the whole world and characterisation around them, not just the (smokin') scenes. But then, as a reader speaking, she writes my kind of book :).

And I'm here with a kind of apology (because I haven't found another email addy for you where I can just sidle in unnoticed, blushing...). I had your blog bookmarked but it only just leaped back into life for me. I found I'd missed months of posts LMAO. And - even worse - some of them included really kind comments on my fiction.

So I'm so sorry I haven't been more present. I'm full of Bloglines-fail :). I love your quirky, stylish comments on the books you read, I get to find out a lot about books I may or may not be attracted to myself, and I tend to agree with you on a lot of them! Thanks :)
*and I'm still blushing with embarrassment*

Yay! You discovered Jackson and Adin. I thought that you'd like these two. :)

Clare: Ummm. No one is even supposed to know this exists. I don't know how you people find me. I just do it for my own record of what I read. Which is maybe not a good thing because I'm going to freak out one day soon when I realize how many books I'm reading/buying. LOL They aren't reviews, just my comments on what I read which is sometimes not very helpful. But I'm glad you enjoy it.

Kris (and Clare): I have no idea why I haven't read the Jackson and Adin books. One of those things you go "oh yes, I must get those" and then get side-tracked by all the shiny new baubles that show up nearly daily. I was the same with the Utopia X series, now clue why I didn't start then totally hooked. Oh well, binge readers R me. :-)

Not supposed to know this exists?! But I love seeing what you're reading and hearing what you think about it.

But then I get all intimidated Chris and worried I'll offend someone or hurt someone's feelings. Sigh. I try not to be mean but I can be snarky. Same thing? LOL

The authors who sometimes appear out of nowhere. No you Chris. :-P You're tough. LOL

Just be honest. Did you look at my reading update yesterday, in particular the last book I listed?

Personally, I love reading people's short reviews of books. Hell, I know you do, too - see, for example, that dangerous post of Jenre's last Saturday! :)

Hey, did I tell you about the scary crazy massive Fictionwise sale, esp after you apply the special coupon that's good through 12/15???