Since I don't have a real life I am able to read and read to my heart's content. :-)

This is book three in their interlinking series so you don't NEED to read the others but it helps you understand the whole dynamic of the group. Anyway, Patrick is sent to Alberta after his gunshot wound (previous book) to recover with Julian and Jack (first book). While there he meets Brad and they start a "thing" but of course Patrick is only there for a month and he used to date Julian and still is a bit in love with him. Very complicated. On the whole I enjoyed it. Some things I liked were: the fact that after the menage (sort of), there was a not so good fall-out. Too often everyone's just happy dappy after (which can be fine), but this had negative repercussions which had to be dealt with, I like Julian a lot even if he is a worry wort and he had a big part of the book, it's not a HEA, Brad doesn't quit his job after dating someone for 3 weeks and move 3 provinces away, it's more of a "let's see if we can create a HEA" which was entirely realistic. What I didn't like so much: Patrick was pretty angsty, thinking he's only good for sex (sleep with everything on legs and you get a rep bud), the whole sub-plot of the lost kid and they never did explain what the hell she was doing or how she got lost, Julian sister who is a nosy tactless bitch but everyone let her get away with it because she had a miscarriage. Umm. No, rubbing your friend's nose in the fact that you slept with his boyfriend is NOT funny, NOT teasing, NOT cute, that's fucking rude and tactless. Just feeling bad after someone calls you on it doesn't count. Okay, I have personal issues with people like that. Also seems Jack and Patrick had hooked up at some bar in Calgary years ago. What? Are there only 5 freaking gay guys in Alberta? Not needed. So on the whole I think some of the stuff with the lost kid/mystery could have been cut and just stuck with the relationship. I didn't like it as much as Julian and Jack's story, but it was a good read.
Chris inspired me to create this chart when she mentioned how complicated these relationships were. Yep. Patrick was a slut. If he was a little less gay he could have screwed Roz too. :-P 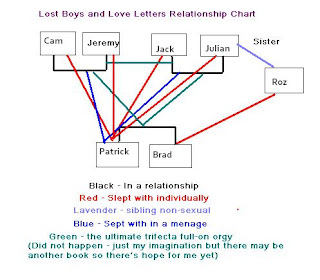 Set in the future, Levi is a journalist who has spent his life working on a story about the mining company crackdown on his home planet that consisted of torture and murder, his father committed suicide, his mother and sister were killed and it was covered up. He gets a memory chip with evidence and proceeds to find out who sent it to him and get them on camera as per his bosses instructions. He is mugged and helped by a hot Dr. in the slums (for lack of a better word) and they get freaky and start a relationship as he believes the Dr's. receptionist is his informant. I saw who the bad guy was a MILE away and the resulting disaster coming down the road. Levi was soooo naive and would tell anyone anything about his story. These people torture people for a living and you think you can just wander around yapping about it? *shakes head at dumb boys* There were also things I didn't understand about regeneration (I won't say more) but I didn't really get the ramifications of it on their relationship and it was never discussed, just kind of tossed out there and then forgotten. So I was left with some questions but it was sort of your typical futuristic investigative reporter story with hot guys. All in all a good read although I started it a couple of months ago, got to page 50 and stopped. Not sure why. No good reason. I'm glad I finished it though.

It's Bethany Brown day on here. :-) Derek and Sky are an IR couple who have both family's coming over for Christmas dinner. Sky (Skylark) comes from a family of hippies with a lesbian Mom and wacky sister and kids and Derek, also the product of an IR relationship comes from a more normal family except for his mother's obsession with everyone wearing Christmas sweaters. The whole sweater thing was pretty funny and made me smile several times. Sky stressing over cooking all the food and some of his family's weird food requirements and their first time with both families together was pretty cute. It's a nice story that some may find a bit sugary but with a good dose of humour thrown in. I wondered if this is a look at a couple already in existence as there seemed to be a bit of back-story about Sky and Derek that I wondered about. Maybe not, but it just had that "revisit" feel to it.

Arthur is a cynic, hates Christmas, the homeless are lazy, money's all that's important, his family is a pain in the ass. While buying the obligatory office gift he meets Mitchell, a clerk in the bookstore. He gets Mitchell's number and they hook up but seems Mitchell is a do-gooder. Gives money to the homeless, works two low-paying jobs, opposite of Arthur who doesn't GET it. They try to get together again and similar results with Arthur being Mr. Negative and Mitchell always seeing the bright side of life. Mitchell forces Arthur to look at things from a different less negative angle and change his whole outlook because he wants Mitchell in his life. Okay, I thought it was set in Toronto because he uses a real sub-way stop name there, but then at the beginning he makes some snide references to Canadians. The author is Canadian so I'm thinking he was having some fun teasing us about Canadians and then using a Toronto subway stop that only those of us familiar with the city would recognize. I thought it moved a bit fast. They meet on Dec. 10 and by Dec. 23 (after precisely 2 dates which ended rather badly) he is ready to change his whole life to be with Mitchell. I think a more realistic approach rather than a Scrooge-like transformation would have worked better for me. I found Mitchell a bit too perfect but I also know there are people like him out there. I'd like to think I'm not QUITE as cynical as Arthur though. Seriously, I'm not. :-D
Posted by Tam at 11:08 AM

Ok, the dynamics in Wild Angels? Would probably make it a DNF for me and I'd be mad at most of the characters to book.

Tangent - love the bit in the song "I Will Never See the Sun" by the Great Lakes Singers where they list Toronto streetcar stops (esp since riding the streetcar there just a few months ago).

They are kind of an incestuous group of friends. I'm not sure all gay groups are like that. They were kind of a core group of friends who all seem to date/sleep with each other as Patrick also slept with Cam (who sent him to Alberta) and his BF too. My head is whirling. I should make charts. I may just for fun, how everyone in three books is connected. :-)

Nope, I'm pretty sure you're right - I was thinking Queen or something! "Yonge" is one the stops mentioned in that song.

You forced me to make a chart Chris. Yes, I'm a geek.

I was reading an ebook for review earlier this year and ended up diagramming the timeline because I couldn't believe it was true... But yes indeed, there were five days between and not including Wednesday and Saturday. *blink blink* The author complained that I was too worried about details. Heh. Hey, if it jolts me out of the story.... ;)

A chart?? Holy crap. Even that looks complicated to me.

I'm with Kris. That chart definitely looks too complex!

I've got A Policy of Lies and am looking forward to reading it. Good review!

Holy crap is right! Um, no, I can't go there. My brain hurts just looking at the chart!

Hey, it was fun making the chart. LOL It's complicated but when you read them it sort of makes sense. Since Chris mentioned time-lines I'm sure some day I'll be doing a time-line chart too. :-)

Val: Policy of Lies was good and Astrid Amara does nice world building and even though I wanted to smack Levi a few times, you are cheering them on as the big climax occurs.

I'm surprised he didn't suggest a menage Tracy. Probably if he'd been around another few weeks he would have. LOL

Rereading your review and revisiting the chart now that it has context? I'm skipping Wild Angels. My "I'd be mad at most of the characters" still stands. :)