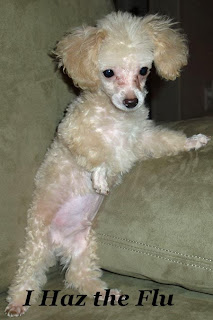 I'm not burned out, I'm suffering from a relapse of the Toy Poodle Flu. I should have figured that out when I was hanging out at MH-T and reading shorts. Duh. I was opening files and going "135 pages. Meh. 250 pages? No. 310 pages? WTF? 400?!?!?! When the hell did authors get so verbose?" So that should have been my first clue. So in the guise of setting up my Fiction Wise newsletter (thanks Chris), I searched by "lowest price" cause that usually means short and spent a whole $6 last night and started reading. Below are my results. Ahem. Perhaps this has given my flu a kick in the ass. Why you ask if you read over 120 pages last night didn't you just read one book of that long? Because I could read for 25 minutes, then go check Facebook, my e-mail and the boys' blogs, then come back and read again, then go and surf and not break my concentration of the story. See, there is method to my madness. Just nod your head kay? Moving on.

Oh and I ditched my Hunk du Jour widget. I have better hotties of my own I'll post.

This is the first follow-up to Rack and Daniel from In the Strangest Places. Seems Rack has booked them on a camping weekend for committed gay couples but forgot to tell Daniel. Well he asked him but during the throws of orgasm Daniel doesn't quite remember. After Rack finally convinces Daniel they should go off they ride on the Harley to find the place. Typical guys they get completely lost and it's midnight and they are in the middle of nowhere. Daniel decides to act on one of his fantasies and entices Rack into the woods for some hot smexin' and they have an encounter with some wildlife. Nothing much here, just a bit more of the guys, some funny stuff with Rack in the woods. I still think all that metal has to hurt but they seem to like it.

Gary has been tasked by family to look after Grandma while they are away. Well seems Grandma and her friends are crackers who shop like mad, flirt with guys and are like I hope to be when I'm 80. Gary is a shy teacher who tries not to be shocked by the ladies but it's pretty hopeless. He sees a hot black guy at the food court at the mall and they encourage him to approach him. He doesn't but one of the ladies calls the guy over and basically says Gary thinks he's hot. Gary melts in a puddle of embarrassment but Troy invites them all to the gym where he's a trainer the next day. After the gym Troy invites Gary for lunch and they make a date. Things go well and Gary can't believe hot built Troy likes him but they can't seem to get together again as Christmas approaches except for some hot phone sex. Gary's Grandma insists they invite Troy over for Christmas Eve and she'll wear ear plugs. LOL She was a riot. She also gave Troy a very interesting gift. Another typical Vic Winter feel good book with some real characters in the old ladies. A cute Christmas read.

What you say? That's not a short. No and I didn't read it yesterday either. I forgot to post it. I won this at Wave's in the Christmas give-away. Spencer is a playwright in NYC who is appalled at the production of his latest play. He gets a call saying Mitch is interested in staging his play about a D-list movie star who died in a mysterious accident. Spencer is sceptical but meets with Mitch and can't help but be caught up in his enthusiasm. Mitch even agrees to let Spencer work closely with him and they become friends during the lead-up to the play. Spencer and Mitch find each other attractive but don't make a move until the star makes a play for Spencer and Mitch loses it and goes for it. There is a subplot about reincarnation and past lives and why are Spencer and Mitch SO obsessed with the story about this guy. I don't believe in reincarnation so I related more closely to Mitch who thought it was hooey (and thus lead to the conflict) but I really liked the characters and it was interesting to read about how they stage a play and what goes into it. Vivien said she actually used to be in theatre so I'm assuming the stuff she wrote was pretty accurate. It was a good read without the big mystery/stalker/coming out of the closet/angsty thing going on which I quite enjoyed. So thanks again to Vivien and Wave for this Christmas present.

I enjoyed the other Cassandra Gold short I read so thought I'd try this one. Mark is a secretary for a law firm and while he gets along fine with women, socially with guys he's pitiful. Tim is the new UPS (he wears brown, what else could he be?) delivery guy who is HOT. Mark of course acts like a spaz every time Tim shows up. The other secretaries start betting on who Tim will ask out first. Mark's friend bets it will be him but the one secretary who is very sure of her "assets" scoffs at the idea. After several weeks Tim asks him out. Mark won't let his friend tell anyone though. They go out for about a month but haven't had sex as Tim is a perfect gentleman and Mark is too shy. Finally with the prompting of his friend he makes a move and they have a smokin' weekend. Monday at work Tim makes a delivery and it happens all the secretaries are together. The bitch overhears Tim and Mark say I love you and it's a great comeuppance. I quite enjoyed this story as well. Not rushed (Hi, let's be in love), Mark was the typical shy goof but it was a cute story with likable characters and I was with Jenny, Mark's friend, I wanted to tell that bitch after the first date. For 18 pages it was a nice complete story. The cover of that book? Not so much.

Generally I like Jade Falconer's stories, this one, not so much. All the reasons I liked the one above, I didn't like this. Anyway, Ricky is a rock star who has a stalker problem. His manager hires Jim as a bodyguard without Ricky's approval. He's pissed but decides Jim is hot and he'll tease him. Doesn't seem to work but the next day Ricky is attacked at an event and Jim saves his life and they get funky back at the house. Okay, Jim is a professional bodyguard and when Ricky suggests they sleep in the same bed the first night he goes for it and even flirts a bit. Then the next day he quits his job but promises to stay and protect Ricky and they are totally smitten. Ummm. How could a professional just completely toss his integrity aside in a 2 hour period? And Ricky keeps talking about how the guy is his savior. You don't want a relationship based on that, really. And if you quit how are you going to live? You need money. So you are going to live off Ricky? Which is what he said everyone always wants him for his money? Bah. Anyway, if the story had take place over a period of weeks or months I could have gone for it. But he hadn't even known the guy 24 hours when they were madly in love. I thought Cassandra Gold did in 18 pages what should have been possible in 40 here. So this was my disappointment of the night. It won't turn me off the author at all because I have read many of her shorts I enjoyed but this one just didn't work.

Have a safe and fun New Year's Eve everyone. I look forward to many more interesting books in 2010 and hopefully my flu will soon be a thing of the past.
Posted by Tam at 9:54 AM

And here I was thinking that your Hunk du Jour finally got it right! I should've known better.

Too funny - I was searching my LibraryThing for shorts I hadn't read and realized - none! I don't have the poodle flu as an excuse - I frequently just like to read shorts. Which is funny, because shorts can be so tricky to do well.

I had the same complaints about Savior.

I like to read shorts too Chris but usually they are just sort of interspresed with regular. When I get all ADHD like this I can't seem to focus on longer books and I binge. Oh well.

Have a good evening.

I've been reading a lot of shorts in the past couple of weeks. Now I know why.

I like Willa and Vic's stories but haven't read the others.

Hey Lily. I generally like Vivien's stories. They aren't really heavy but nice relationship based stories.

In the Strangest Places was the first book I read with extreme piercing/tattooing shortly after I started m/m. Ack, my poor virginal soul. LOL But I kind of got hooked on the characters.

Good for you, Tam! I myself like to read the shorts alternated with the longer ones. They both have their pro's and con's.
The first thing I noticed coming over here was your delicious Hottie of the Day pic! I guess I gotta come back every day now if I don't want to miss one of your hotties ;)
Hope you have a Happy New Year,hon!

Thanks Janna. I'm not sure there'll be a new guy(s) EVERY day, but I'll try. :-) I have enough and I steal them from my friend's sites. LOL

I know some people don't like shorts but I do enjoy them, sometimes I just tend to binge. But that's okay, someone needs to read them all.

I really liked the CG short too. I thought it was better than a lot of her others to be honest.

Hmm, maybe that's why I'm not reading much at the moment. I've come down with toy poodle flu. Sounds like a good reason to hit the virtual shelves anyways. *g*

Morning Kris, not gone to bed yet? :-D

I had only read one CG novel and I didn't care for it that much but these last two shorts were pretty good.

Good luck with your anti-flu therapy.

Thanks for sharing our widget with your readers. Sharing those hunks is really "tough" work, I can see why you're interested in taking on the task. :) Take care & Happy New Year!

Hi Tam, that's okay, every other day is fine by me, LOL! Just kidding, don't want to pressure you, or anything ;) I actually come here for your view on stories, long or short...
BTW Feel free to steal from me too :)

Oww, just for me, really? That's sweet! And I love him and his gorgeous eyes *sigh*
Might gonna take him over to my place ;)

Ooh, he's a pretty one. Love the eyes!

eToro is the #1 forex broker for beginner and advanced traders.