Christmas is getting closer

Wow, you'd think I don't do anything on the weekend but read. Oh, you may be right. But I did do some baking yesterday but it had to sit in the fridge for 8 hours (or 24 in my case because 8 hours was 10:30 and I wasn't doing any more baking last night. So I read and read and read, until 1:00. Bad me. I've also noticed that books I like but don't love I can never remember the main characters names. If I love the book, doesn't really matter how short, I will remember, if I just like it or it's okay, I don't and I always have to look it up. Guess that should be my indicator as to how many stars I give it on Good Reads. 4 stars means I remembered your name, 5 stars says I remembered your name, underwear colour and how you take your coffee. LOL

This was the culprit of my non-sleep. I was bought Tommy's Story (below) and was cruising around Fiction Wise and saw this one and I thought there was no way two stories could have a guy named Soldier so I got this one, which is the precursor to Tommy's story. Glad I did, and I read it first.

Anyway, Dillon is a former foster kid who is now sheltering 7 emotionally, physically and sexually abused kids in an informal shelter as the kids don't work in the foster system. He's not licensed though so they keep it quiet. One night he meets Soldier who is hanging around watching them. One of the really damaged kids takes to Soldier like crazy and even though Soldier hates being around people he is absolutely hooked by what Dillon is doing for the kids and wants to help. Seems Soldier is filthy rich but was badly burned/injured by a bomb in Iraq and his face/body is badly scarred. Dillon was gay bashed when he was 14 and is also scarred where his face was cut. Anyway, Soldier and Dillon connect and Soldier proceeds to help with the kids, two of the main characters are Gom (the little one who took to Soldier) and Tommy, a sexually abused boy of 12. It's a book about the trials and tribulations of having a relationship, helping severely damaged kids recover and working the system as gay men with some evil parents thrown in. Why was I up until 1:00 reading? It broke my freaking heart. These kids had been through BAAAAAD stuff and some of it is put out there on the page for you to read and as a mother it kills me to know parents do this crap but I know it happens and some much worse than in the book. Yes, Soldier went from having no human contact to talking about feelings and helping kids deal overnight and yes, they moved really fast and it was almost insta-love but I just ADORE the theme of guys helping kids in trouble who need a good home and some love. *sniff* Yes I teared up. Shut up. So while I'm not sure the characterization of the guys was all that realistic I didn't care. Call me a sap. 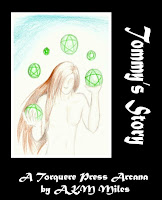 This is a little follow-up to the one above focusing on Tommy but with everyone making an appearance. It's 10 years later and Tommy is now a social worker who is back home working for his parents in an expanded shelter. He's been crushing on Daniel who ran the homeless shelter which funneled kids their way but he's older and Tommy was so badly sexually abused he doesn't know if he could deal with a relationship. There is the subplot of Gom who is attacked and badly hurt and trying to find out who is behind it. One night Daniel reveals to Tommy that he loves him and wants a relationship so it's partly Gom's story and Tommy helping to find the culprit and Tommy and Daniel dealing with Tommy's fears of intimacy and getting past it. A bit pat in the solving of Gom's crime but it was less than 50 pages so they couldn't drag it out and it was nice to see how someone who was sexually abused deals with being in an adult sexual relationship. So a nice little follow-up but obviously not as in depth as the first one.

Eric is moving to Flagstaff for a new job and he's going to live with his sister and twin boys for a bit while their Dad is in Iraq. It starts snowing and the police pull him over to put chains on but he's clueless having never driving in the snow. Cameron the cop thinks he's cute so keeps an eye on him. Seems Cameron lives down the street from his sister. They both agree there is attraction and kind of work on it, tip toeing around a bit until NYE when they finally get together. It is a cute story of two guys getting to know each other, no insta-love but lots of attraction and Eric was one of those cute klutzes that kept needing rescued by Cameron periodically. A cute little read.

This is one of the DSP things with a different cover. Darren's lover died 4 years ago on Christmas Eve. He's been a wreck ever since but Max, who introduced them keeps hanging in there. He invites Darrel to go to his parents with him for Thanksgiving. Surprisingly Darren agrees and is immersed in a house full of wild family which is kind of overwhelming but during the chaos he finally acknowledges that he feels something more for Max. After they get back they are trying the dating thing and on Christmas Eve Max is coming over and he shows up with a gift that Marlon had given him for Darren that fateful night. Seems Darren and Marlon had had a bad fight and Max is afraid it was a "get lost" gift so never gave it to Darren. It's basically a story about moving on and seeing what's right in front of you all along. A couple of niggles, one of the in-laws at Thanksgiving was very cold to Darren but it never explained why. Wasn't sure if he was homophobic or what because everyone else in the family was fine with Max being gay. So I wanted to know what was up with that. Darren was a bit of a selfish ass and Max held on for 5 years or so waiting for him, not sure that's realistic but hey it worked. A nice story about moving on after losing someone and the value of friends. 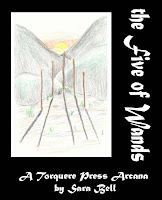 Travis is an intern or resident (not sure) at a big hospital where his father is the Chief of Medicine, however his father hates his guts. Jeremy is another Dr. who seems to delight in being an asshole to Travis and making snide comments about his Dad helping him out. Jeremy overhears something that makes him realize maybe he was wrong about Travis and when Travis is accused of giving a young boy the wrong medicine and then covering it up on the charts Jeremy comes to his defence and they both admit they've had feelings for each other. So it's a combo of them getting to know each other without the animosity and solving the mystery of how the child got the wrong medicine (which nearly killed) him and who framed him. The only part I didn't care for was this whole section where Jeremy took him to his Grandmothers place an they walk around her garden which has statues based on Tarot cards (Arcana tie-in? Get it?) and they stand and talk about what the 5 of swords means. It was like "damn, I have to put something in here about the 5 of swords, this will work". Umm. No. A better solution would have been to take Travis out and get him hammered like he wanted to rather than discuss life changing decisions in a garden when your career is flushing down the toilet. Anyway, I found that kind of stuck on and perhaps Jeremy's turn-around was pretty sudden but they did say he'd been noticing how great Travis was, just didn't want to admit it, so not that different I guess. An okay little short.
Posted by Tam at 12:48 PM

I'm going to have to see whether your remembering the name thing holds true for me!

I was hoping the Christmas kittens would counteract his evil glare.

My god I need a nap. No more reading late on a work night. LOL

I was too skeered to look away at the kittens, in case he was just waiting for an opening to begin some diabolical mischief.

Hee hee - been there, done that! Too bad you can't always tell when you're going to get sucked in like that.

The soldier story looks really interesting, if a little contrived in terms of the inst-love thing. I think I'll get it.

I don't think I could read the soldier story. I get all tense and stressed out when I read stuff about child abuse so I tend to steer clear of any stories like that.

Kris: There were lots of weaknesses but something about it just hit me in the right place (that soft squishy in my chest place) so I was willing to overlook near-insta-love and other things that might drive someone crazy. :-)

Jen: Definitely pass then. There isn't tons of detail but with little Gom there is a fair bit of detail about what happened to him, with Tommy it was more hinted at and not spelled out but you knew. I know that kind of thing can be hard for many people to read about.

Okay, and now today's hunk is a freaking stick insect. What's up with that? Can't they find hot boys?