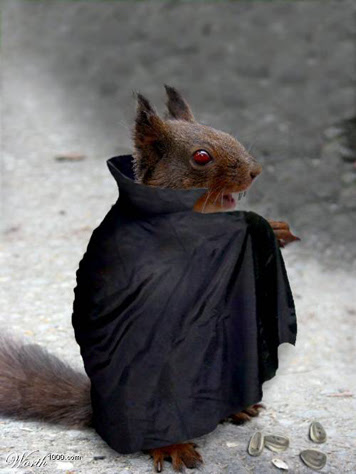 So a couple of vampire stories later it's time for a report.

This is the continuation of Immortality is the Suck. It picks up about a year later, Adam is working with his "vigilante" gang taking out rogue vamps and saving kids and Peter is working like mad. Adam has made some changes. He's finally realized he cares about Peter and is making an effort to be a better boyfriend. He's faithful and the fact that Peter is still seeing his young Jonathon makes him crazy. On their date, Adam finds a dead body and Peter is pulled into yet another investigation along with Adam who reveals himself to the FBI. I really enjoyed this one as well. The mystery is interesting and Adam is not quite the jerk he was in the first one, he's still no angel but he seems to have picked up a bit of a conscience when he died and it's kind of nice to see him feeling insecure about Peter's affections and figuring out his future. Seeing his relationship move forward with Peter FINALLY after nearly 20 years was nice. I was still left with questions, Peter said he's looking younger, is he different than other vamps, did Caballo die, etc. But I could live with it being the end as well. Anyway, a super series that I recommend.

I forgot to add that model on the cover has a very nice bum. :-)

This is a short told from Peter's POV. He's trying to find the perfect gift for Adam for Christmas. Adam is not thrilled to celebrate at all and of course Peter gets called in for a case on Christmas Day and comes back to Adam's hidey hole to wait for him. This was actually published BEFORE Immortality so it was a bit different. In my brain I was trying to fit it in to where it falls in the timeline and it didn't quite fit. Adam's personality was darker and Peter feared he'd simply disappear and Adam seemed to have some major angst which in the other books really wasn't his style. So it was okay and interesting to see Peter's perspective and insecurity, but I think because of the way they were written was less satisfying than if it was written now where the personalities of the characters were more established and fleshed out.
Posted by Tam at 6:40 PM

Yeah, the short is really odd, because it totally doesn't fit!

I checked the publication dates and it was Dec. 2008, Immortality Aug. 2009 (or something like that) and then the new one now. It feels like the author came up with an idea and wrote a short then decided to flesh it out later and naturally the personalities would gel and change, but it made me feel a bit off kilter because they were sort of the same characters but not quite.

Yup - that's what happened (I read a blurb about it somewhere).

Mmm, I've got your Hottie of the Day as well. Love the pic uncropped. Yum! ;D

Yeah, I'm not sure it would have snagged my interest enough to make me go "Oh want to read more about them". It was definitely recommendations (and the colour) that made me get Immortality Lily.

I do try to keep my hottie discrete. No ones tagged me as a naughty blog yet. LOL

That vampire squirrel is the real hottie. I'm so going to write a book about him and you will have no one to blame but yourself, Tam. I think I will call the book, Blood and Nuts.

Gee, Tam, won't that be fun, having your name in the dedication of Stephani's book?! ;)

ROLF I would be honoured and thrilled Stephani. That is the best title ever. It would be a huge hit I'm sure

The story would be all happiness and rainbows until Vampire Squirrel darts out into traffic, then it would be so, so sad.

Um, Stephani? You do realize that you have about half of a story already that would be suitable for Kris' choose your own m/m story...... Have you considered participating???

You're killing me Stephani. Really, we HAVE to get you to do Kris' pick-your-own story. You'd be great.

*adds Stephani to choose an author to pick on list*

I would love to do one. It sounds like a blast.

Yay! Although you know I wasn't really asking as much as telling. ;)

I haven't read the short yet and reading your and Chris' views I might not bother.

The vampire squirrel is creepy. Can you imagine one of those critters dropping out a tree when you walk under and attaching itself to your neck. *shudder*

It really doesn't add to the overall story Jen since it was written before and as I said, the characters just seemed "off" as they are more settled in the later books.

But it would make an hilarious sketch on some low-brow comedy show on TV. LOL

Mixed bag of reading for you Tam....

Love your cutie of the day...

Priceless photo, Tam (vampire squirrel). How interesting about that short story! I haven't read it yet and I assumed that the author did it after Immortality. Now I'm super intrigued to read it and see how the author was figuring out the characters' personalities. Did you get the feeling that No Rest was THE END, as in all wrapped up and no more sequels?

I think if I'd been more ready to look the short like you are Val I might have enjoyed it more. To say "Oh, look how she changed that." Instead I kept having a tendancy to go "Why is he acting like that?" LOL But it was only 16 pages and the writing is good, it's kind of like seeing someone after extensive plastic surgery. They are the same but different.

I felt it could well be the end, but there are enough openings for more. I didn't get left with that cliffhanger "OMG, you have to tell me what happens with X" feeling, but I would be curious to see down the road how they are going to cope with Peter aging and Adam supposedly getting younger (will all vampires end up in diapers and wasting away to a zygote?), and now that the FBI woman knows vampires exist what does that mean? So I think there is plenty of fodder for future books if the author chooses, but it was wrapped up sufficiently for her (him? - no clue) to move onto something new if they choose.

I wouldn't want a lame sequel just to keep it alive because we loved Adam and Peter though. It's such a strong duo of books it would be a shame to water it down by churning out mediocrity just to keep readers happy.

You're hottie of the day is one of my all-time favorites. David Williams, Australian rugby player nicknamed "Wolfman" is truly gorgeous.

He's actually my wallpaper on my computer and on my calendar this month. So freakin' hot.

"I wouldn't want a lame sequel just to keep it alive because we loved Adam and Peter though. It's such a strong duo of books it would be a shame to water it down by churning out mediocrity just to keep readers happy."

Thanks, Tam, for your thoughts. Very true, plus I'm not sure if Loose Id is interested in spinning out a long series.

Ooops, didn't mean just for this story. I think that Loose Id might not publish gargantuan series in general, on principle.

Thanks for the background info Heidi. Sometimes I follow the link trail to try and find out who the models are because I like to give a bit of story, but I was kind of in a rush this time. He is delightful.

I knew what you meant Val. Loose Id isn't known for carrying a lot of series. Every publisher has their "thing" I guess.

Although... doesn't Loose Id carry about all those Willa Okati Brotherhood books?

Is that series older than 2009? They might have changed their policy. Or maybe she's so established that she's an exception.

Tam
The vamp squirrell reminded me of the squirrell you gave me with the big balls. :)
The Vamp Who Has Everything is the first A.M.Riley book I read and reviewed - it might have been in 2008. I love her vamps.

Maybe he's that squirrel's cousin of the night Wave. LOL

I think she definitely refined them and made them even better after that one. I love Adam and Peter.