Yeah, I've read a ton of shorts in the last two days. Life of leisure you'd think I lead. Maybe I do. Sastre is a "Guardian" (good-guy mercenary?) who is hired to take Prince Anel to another kingdom to marry the princess and meld the two kingdoms. Kaleth, Anel's servant/lover is made to pretend to be the prince. Sastre becomes enamoured with Kaleth, they are attacked en route, both Anel and Kaleth are captured, there's an illegitimate brother, a maimed former Guardian and another mystery Guardian that shows up. Lots of action and I have to say these guys were the prettiest boys EVER. I could just sit and look at them, I'm serious, the art work really did it for me. I think I'll look for Vol. 2 just for more artwork.

A lot of the Dreamspinner shorts are either Daydreams (this cover) or Nap Size (the other cover).

This is a short about a 17 year old skater who is trying to get up the nerver to go to a GLBT youth group meeting. He meets another skater outside and they end up going to an indoor skate ramp before the meeting. He finds out the other kid is the organizer/leader of the meeting and he gets his first kiss. A cute story about accepting who you are and getting the courage to take that first step with the help of a friend. Its in present tense which always takes me a bit to get used to but I really enjoyed it.

Time Out by Clare London (41 pages)

Oliver is high-p0wered, rich, famous, gorgeous and runs his family corporation. Marc is his security advisor and lover. On their one year anniversary together Marc comes up with a plan for Oliver to leave work and responsibility behind and they can be an anonymous couple just for the day. Its HARD for Oliver to not take care of EVERYTHING but at the end of the day he realizes that he can hand off some responsibilty and he needs to enjoy life too. It was fun to see Oliver discovering normal stuff like shopping for clothes and just reading for fun. I really liked this story and it was very entertaining.

This is a trio of stories about Cameron and Micah. You don't find out much about them personally but they like to play role playing games once a month (or more often when inspired). They take turns filling each others fantasy. Ride 'em Cowboy is easy to guess, a short, Best Behaviour is a school boy/head master scenario and Amorous Liaisons is the servant boy/master seducing the innocent scenario. They were different in that you had an inside view as to what the characters where thinking while "acting" as they tried to stay in character for their partner's pleasure or decided to forget it and just drop the game and get down to business. They were all cute and sexy but a more comprehensive book about the two, how they met (its alluded briefly) and their life outside of games night would have appealed.

Leonard just saw his teen son off on the plane back to the US while he stays in Denmark on sabbatical and is depressed when Camden, a Brit comes to his aid. They chat, have a drink and decide to get together. Camden is a definite top (don't touchy there) but Leonard convinces him to give it a try. Later Camden comes to visit Leonard at the University where he's teaching and they make plans to spend more time together exploring Europe despite Camden's high stress job running the Copenhagen airport. I like these two authors and it was another sweet story although I was surprised that Camden (no young 'un as he had 3 teen daughters) allowed Leonard to top the first time they were together after only having tried it once long ago. But I still enjoyed it.

Yes, I'm reading Christmas stories in June. Shut up. I read Halloween stories in Feb. too. Zach is out doing last minute Christmas shopping when he notices the mall Santa looks familiar. He follows him on his break and it is Shane his live-in love. Seems Shane wanted to make a good impression on Zach's family so was working as Santa to afford better gifts. They have a little interlude in the break room. Who'd have thought Santa suits can be hot? A cute story with two likeable characters. More about them would be welcome.

A Case of Mistaken Virginity by Connie Bailey (41 pages)

Masey agrees to go back home with his best friend (girl) to a wedding. At the wedding Dale (who works on the horse farm) overhears the girls talking and mistakenly thinks Masey is a virgin. The next day he takes Masey riding and is very solicitous thinking he's a virgin and Masey (who's a love virgin not a sex virgin) is very touched. It then just kind of skips to the future where everyone thinks they are so cute and have been together so long. My only complaint was I would have liked more detail of how they got from A to B and Masey lived in NYC (or some big city in the north-east) and Dale lived on a farm in Florida. Who moved where? What about work? How did it all work? So more was what I needed. Didn't dislike it but just wanted to know more.

A story of Dale (huh - 2 Dales in a row) a financial manager and Jackson a famous actor (with a quirk about buying markers that he gives away while signing autographs). There's a bit of a running thing with Jackson using a different financial manager but really its just two guys being in love (and obsessed with markers) and Dale asks Jackson to marry him and he decides that if they are married he has to change financial advisors (hence the merger). My only complaint? At the end, for dessert while the ring is presented? They eat chocolate mousse. No, that's not bad, but it is served on a plate (huh?). Better yet? He's eating it with a fork. WTF? Who eats mousse on a plate with a fork? That's just wrong. And apparently really stuck with me because I remember more about that particular paragraph than the whole book. I did find the marker thing funny though and liked the characters.

From the Heavens by Vic Winter (28 pages) 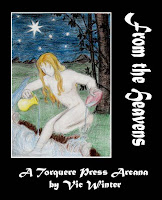 Dirk is a burned out EMT who's boyfriend just dumped him. He goes to the mountains to get away and goes for a hike. He falls asleep and wakes up after dark but decides just to hang out enjoying the stars. His hostess at the B&B had panicked and called the search and rescue. Wayne finds him they wait till morning talking and decide to have a date. They get along and eventually Dirk takes a job as a paramedic there and they live HEA. A nice story that even in 28 pages left me feeling like it was complete. In some stories you either feel you didn't get where the characters were coming from or you wanted more, to figure out how it got from meeting to HEA, but this one felt complete. Sort of a feeling of satisfaction that you got pretty much the whole picture and were content with that.

All the Things you Are by M. Jules Aedin and Anna J. Linden (91 pages)

Bryant is a college football player from AL who's career is ended by an injury. He decides to start fresh and out and moves to San Francisco. While exploring the first few days he comes across Kai, a massage therapist. They get off to a rough start (Bryant thinks he's a girl because of long hair) but Kai offers him a massage when he sees him limping. They have dinner and pretty much move in together without meaning to. When Kai's roommate moves out Bryant (who couldn't find an apartment) moves in for real. Things are great until one day Bryant comments on Prop 8 and Kai basically says marriage is a waste and he has no use for it, who needs it. It kind of freaks Bryant out because he's thinking he's like to marry Kai. He basically takes off rather than confront Kai which kind of annoyed me but after a week Kai makes a move and they exchange rings and its a HEA. I really liked them as a couple and how they intereacted and even though Bryant ticked me off.
Posted by Tam at 6:50 PM

Hey! Thanks for taking the time to review All the Things You Are. :) I'm glad you liked it, even if Bryant frustrated you. I'm sure Kai felt your pain. *grin*