Movie Review (and more): The Artist

So last night I had a date … with my kid. But that’s okay, because we had fun. She asked me to go to a movie, which was playing very near my work, so she came downtown and we had dinner first. We went to an Ethiopian restaurant we’d never been too. We ended up having the combo platter for two. In an Ethiopian restaurant there are no utensils. You simply rip off a chunk of the bread and scoop it up. The bread is rather like a thick crepe and we each got samples of: beef, lamb, chicken (which came with boiled eggs), red lentils, yellow lentils, green lentils and a cabbage/carrot mixture. I particularly loved the beef, red lentils and cabbage. My daughter liked the lamb, chicken and red lentils. This is what the tray looked like. HUGE. And they brought more bread even though the meal was on 4 large pieces. We were stuffed and while it was a bit messy eating with fingers, it was fun and delicious. And cheap. It was $23 for that big plate of food along with sodas. 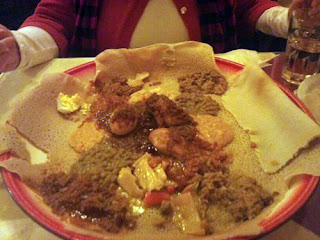 Then we went to get our movie tickets. Because the movie theatre is an independent one, known for showing obscure movies not released in theatres or foreign films, it’s not got a big lobby like a multi-plex. So we got our ticket and had to stand out in the cold in line. But not for very long. The theatre was quite full as it’s the only place it’s playing. The only downside was the woman next to me had on a very strong perfume. I didn’t care for it anyway, but combined with that movie theatre popcorn smell. Ugh. And since the theatre is old, that butter smell has probably been there for 40 years. LOL I think my daughter was by far the youngest person there. Most people seemed over 60. But she’s very interested in film (wants to take film studies) and was intrigued by the concept, so I was happy to go with her even if her friends weren’t. 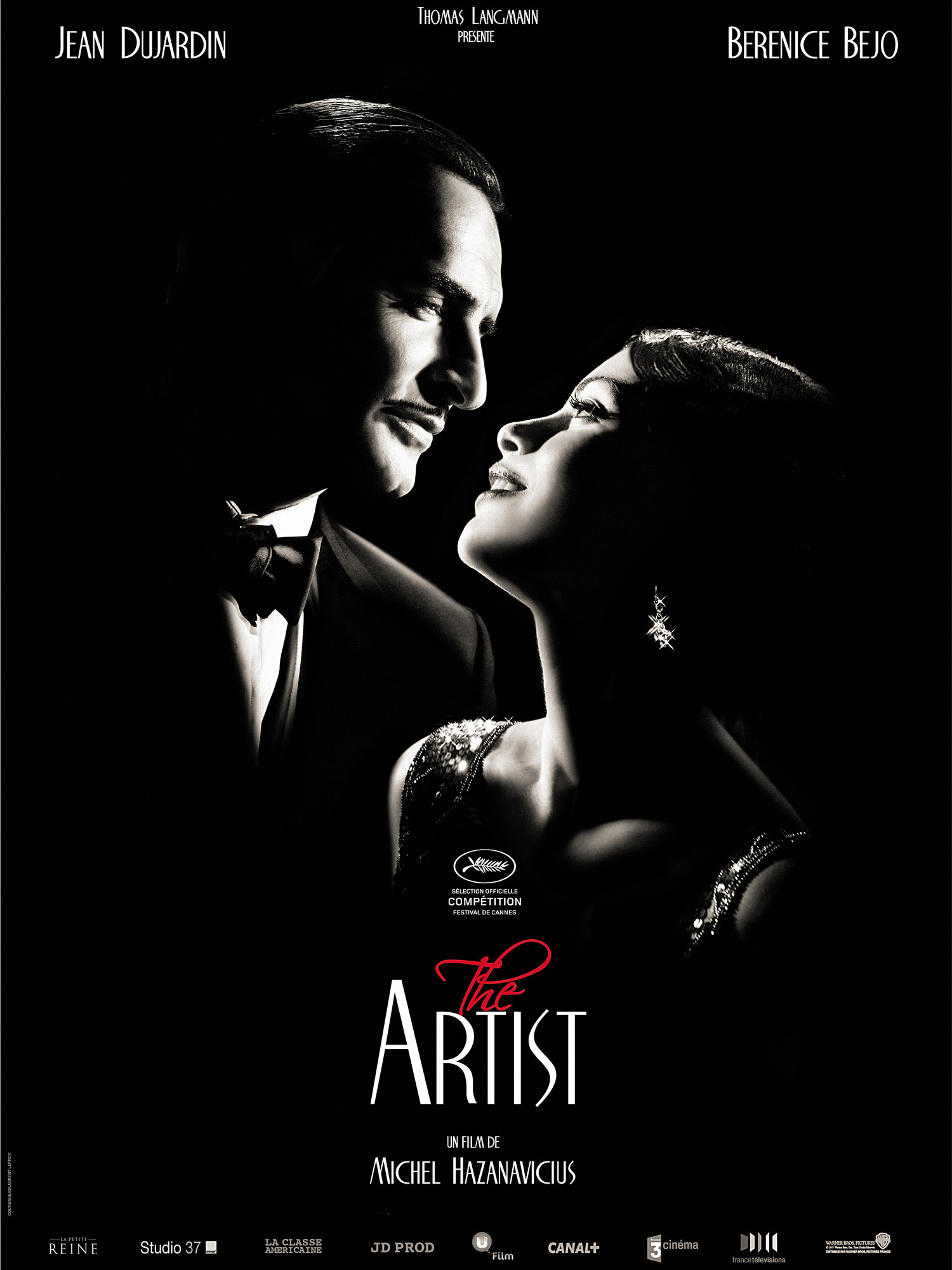 The lead character, George Valentin, is a huge star of silent films. However when talkies come in, he wants nothing to do with it, sure that’s it’s a fad. However soon he’s out of work and a young woman Peppy, who was an extra in a movie with him, is the darling of the talking cinema, and he’s spiraling down into depression. His wife leaves him, the stock market crash leaves him broke, and he’s a legend in his own mind only now. However he keeps running into Peppy, who has been in love with him for years, but it’s fairly one-sided. When he has a breakdown, and nearly kills himself setting his apartment on fire, he finds out she’s been the one buying his memorabilia to help him out, which stings his pride.

So it’s a pretty standard story, it’s well done, but not spectacular. What is, is the way the story is told. His life is a silent movie. The entire movie is done as a silent movie, about silent movies. :-) It’s black and white, there is no speaking, only music, and you see the words on the screen as you would in a silent movie. It’s a very intriguing concept. You don’t realize how much you rely on words and tone to convey what is happening, until there are none. The actors use overly dramatic movements in those old movies because there was no other way to convey if you were angry or sad or surprised.

They also don’t script every word on the screen. You do a fair bit of lip reading, and just imaging it from context. They meet on a staircase, and you can tell she is really excited and crushing on him, and she’s babbling on and you have no clue what she’s saying, but you don’t need to know. You can tell how she’s feeling just from the action on the screen and the music. So it was very a very cool concept. Also near the end, there is about 90 seconds of absolute silence. No music, nothing. You don’t get that in a movie. Movies are like radio, dead air is to be feared. And it was very weird. Suddenly you hear EVERYTHING in the theatre and you become very aware of yourself. You only really get to hear sound for about 90 seconds at the end, when the lead actor finally says two words on-screen (with the cutest French accent).

So I think it was innovative, or innovative for 2012. The lead actor was really very good at portraying a man who went from the top of his game, to as low as he could go. The one thing though, he always loved his dog. The dog was adorable and starred in his movies with him. The girl playing Peppy was also very good, her loving him from a distance was not over-done, but you knew. She was his biggest cheerleader, even when he wasn’t interested in having a cheerleader and was happy to wallow in self-pity. As well, James Cromwell as the faithful driver, and John Goodman (who has lost some weight) as the producer, were nicely played. On the whole it was a fun time, there were laughs combined with the drama and the costumes and sets from the late 20’s and early 30’s were fun.

Definitely worth a chance to see, however I doubt it will be at any of the big multiplexes (unless it wins a Golden Globe or Academy Award). I’ve put a clip below so you can get a feel for what it was like. If you get the chance, I’d say go and see it.

That food photo looks delicious. I've been following your description on Twitter with interest. And I haven't seen a silent movie since I saw a special showing of Metropolis in college (not like I was in college when it was first released, ha, ha!), so I'm curious to see this.

Did they have talkies back then Val? ;-) It's a very interesting picture and you really have to pay attention because visual cues are so important, you can't slack off and text while watching. :-) Of course if every movie was like this it wouldn't be so intriguing, but it was a fun change.

I liked 'The Artist'! The best part was when the wife left the note and told him to see 'Beauty Spot'!!

I also liked the lead actor, but I'm rooting for Michael Fassbender to get Best Actor for 'Shame,' which was my favorite male performance this Oscar cycle.

Yeah, that was a bit of a kick when he was down.

I haven't seen Shame, but I really enjoyed the lead in this one.

Intriguing!! A few years ago, one of the independent theaters here showed a couple of the influential silent films (and I can't remember which ones anymore), complete with a piano player in the theater to give us the actual experience! It was really, really cool - and the piano player was the guy from A Prairie Home Companion, so very good.

A few years ago my ex and I went to something similar Chris, but it was like a small orchestra not just the piano. I think it was a Buster Keaton film. Very slapstick but it was cool.

What an interesting concept for a film! It sounds a bit bleak though, please tell me it ends well.

I love the idea of that food platter! I shall have to see if there's an Ethiopian restaurant near me. Probably not since I live in the uncultured North :(.

It does end on a very positive note Jen. That first little still photo is pretty much the last scene in the movie. It does have it's bleak moments but it leaves you feeling good, he just had to the hit the bottom before he was able to start moving up again.

You might be surprised. You'll have to google the restaurants.