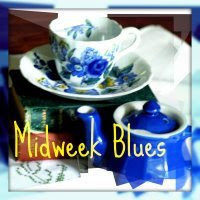 Yeah, I'm feeling kind of blahbitty. Nothing in particular, just kind of blech. I can't seem to focus much. Read 5 pages, check twitter, read 3 pages, post something. I think it's my usual up and down slump I tend to hit with regularity.

On the upside. Thanks to everyone who said such nice things about Winterlude. I really appreciate it and you made my first release pain-free. When I get my first 1-star review I'll come back and cry. :-)

I took my daughter driving for the first time ever on Sunday. We went to the big arena parking lot which was blessedly empty and she just kind of drove around. We had a bit of whiplash to begin, as she adjusted to the brake, and I'm glad there were no cars she was going past, but she did okay. The hardest thing was trying to describe going in reverse. For the life of me I couldn't use words to describe which way you turn the wheel when you want to go left or right. It was weird. I can do it, I just can't tell you how to do it. LOL She's not ready for the road yet, but we'll head out a few more times before she tries out quiet neighborhood. I only had the urge to press my foot to the floor a couple of times, so not too bad.

I did read a couple of things on the weekend.

This cute short starts with Brian taking his boyfriend of 6 months to meet his mother and sister. However it all goes to hell, again, when his family who are witches (Brian is a null with no power) scare him off claiming it's for his own good because he's not right. He was number 7 they've done that too. Later that night during a storm he takes in a stray cat and after drowning his sorrows in beer and whining to the cat, he decides on a whim to try one of his grandmother's spells to find a mate. When he wakes up in the morning, he's in bed with a very sexy guy ... with a tail and ears. There were things I loved in this story, Tom, the cat-man was perfect. He was aggressive in the bedroom, but a typical cat outside, curling up in the sun to sleep, watching the birds out the windows, eating tuna, very sweet. I liked Brian when wasn't around his family, I hated his family. It was a classic case of "we can do whatever we want and get away with it, as long was we say 'it's because we love you'". Somehow that makes any disrespectful treatment acceptable. And he got sucked into it. He couldn't be angry with them because "they loved him". *bangs head on wall* That's a personal thing for me and most people probably found it endearing or even funny. It makes me buggy. However Tom was so cute and cuddly I could live with it, and his family did kind of fade out, or become less obnoxious, after the first bit, with the focus on Brian and Tom. So if that kind of interfering family doesn't bug you, you'll love this (stalker alert), but as I said, Tom made it worth it, even with my little hissy fit.

All Stirred Up by ZA Maxfield (173 pages)
MLR Press

This is a follow-up to Stirring Up Trouble with Brendan, the twin brother. Following his experience with a fatal car/pedestrian accident that killed some acquaintances and nearly his mother, Brendan is suffering from PTSD, although denies it. However his company tells him go and get yourself fixed or else and they hire a psychiatrist to accompany him to a rehab. He is not happy but eventually agrees he needs help. However within hours he and Dirk are tossed off the plane and having sex in an airport bathroom. Dirk quickly removes himself from the case but after a few panic attacks they decide to drive from Dallas to Santa Fe, leading to more adventures in a Walmart and a small town. Eventually they make it and Dirk leaves, leaving Brendan to his therapy. The therapy is a success and Brendan is warned off Dirk by Dirk's father (owner of the rehab) who wants him to marry a woman. Eventually his family prods him into finding Dirk. This was a bit over the top. Really, you had sex with your client within hours? I know it's all about "I don't normally do this but you obviously make me crazy" but come on. You were 28, not 18. I also wanted to know what had happened to Dirk while they were apart. Was he really back with his ex-GF as his father said? It was never addressed again. It was an entertaining read, although I found Brendan's coping with the PTSD and the accident itself more intriguing than the romance, although it was hot sex.
Posted by Tam at 7:00 AM

Ah, I remember having trouble with what direction to turn the wheel when going in reverse. To this day, I cannot parallel park.

I had some issues with All Stirred Up. It's definitely my least favorite of ZAM's books.

Maybe part of it was they were actually together for so short a period and when they were it was over the top wacky, that I couldn't connect as much with the couple vs the other storylines. *shrug*

I CAN parallel park, but the process isn't pretty. LOL

Winterlude is on my TBR. Looks like everyone's really enjoyed it!

I think you might be going through a writer's version of postpartum depression. It always seems to hit after a book is released and the first batch of good reviews are posted.

I actually still need to get my drivers liscence *eek* Good luck teaching the mini you ;) BTW, have you figured it out what you're going to do with your firat royalty check? ;)

Ah yes, I suppose KZ. Kind of the panic to the crash. Actually I've kind of been inspired to work on my gay circus again. I was in the blah's about the poor guy for awhile, but maybe he's getting his shit together.

Hope you enjoy it.

Even if you never drive it's great ID, at least in North America Leontine.

Hmm. Since it's a sip and I will hopefully have my magical US tax number before then (or else Obama gets 30%) ... buy a pack of gum? Maybe some McDonald's French fries? LOL I don't want to spend it all in one place. ;-)

When I get my first 1-star review

That won't happen. Or if it does, you can rest easy in the knowledge that it's from some young reader (emphasis on young) over on GR, trying to look cool by randomly rejecting people's creative efforts. Take it from someone who's been reading for more than forty years -- there was nothing one-star about Winterlude.

Ha, ha! I'm like this with computer keystrokes. I know how to take a shortcut or two, but it happens so fast and is so instinctual by now that I can't really teach it to somebody. My conscious brain hasn't hung on to the instructions. :)

Thanks Val. I guess I'll know I've made it when some hater starts giving out random 1-stars. LOL

I can visualize it in my head, I could reach over and turn the wheel how I meant, I just couldn't seem to get the words to match. LOL

Oh, Elderflower sounds intriguing. I have that ZAM, just haven't gotten around to reading it.

Hmm. I don't think I can describe the steering parts of going in reverse, or recovering in a skid, or anything like that. It just happens.

Elderflower was cute and as I said, any reservations I had with the family from Hell, Tom more than made up for. However as I found on Goodreads, I may very well be alone in finding them annoying. It's not the first time people have found that kind of behaviour hilarious and endearing, whereas I would have walked out of the house and never returned. So I know when it's my bugaboo, not the story. :-)

I can visualize it, I can even act it out, but when I have to say which way I'm turning the steering wheel, I'm not sure. Weird.

I wasn't interested in the first Stirred book and will pass on the second as well. Elderflower sounds interesting though. Another for my wishlist.

I sometimes still get the urge to brake when the "kids" are driving and they're in their 20s now. It's the loss of control, I think. :)

Uh oh. So I should prepare to be pressing my foot to the floor for sometime to come? LOL

Elderflower was good and I imagine most readers will not have the same issue I did.

I actually meant to have read Winterlude by now, but I'm a bit like you atm, can't focus on reading (or anything else) very well. It's annoying, but I think it'll go away once we bought a house *I hope*.

Don't worry about it Janna. I'm sure you are stressed to the max waiting to know if you have a house or have to move into a cardboard box under a bridge. :-) Good luck and hope you get something soon.

If you put it that way. O_O

Ahhh, reversing. That wasn't so bad, but it was parallel parking :) Good luck!

Elderflower: Let's Get Familiar sounds good, but did I see the words 'stalker alert'? EEEP! *hides*

I think she'll be taking lessons for the parking Orannia. I can barely do it myself. :-)

The stalker is a small role but it's an ex-boyfriend. So it's not too bad, but then I don't mind the whole stalker thing. :-)