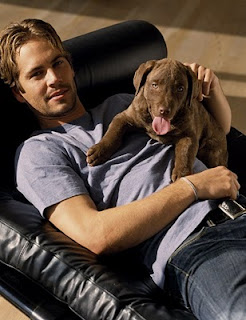 Happy Saturday. Click on the cutie and his pup above and check out my post on pets in m/m at Wave's place today. I got some reading done this week but was feeling a bit blahbitty blah.

Craig is looking for a guy like him, one who wants to settle down and have a normal life. One day at work he's heading out for an on-line lunch date. Who shows up? His colleague who he's been crushing on but is into the leather scene and sleeps around, not what Craig wants. He gets upset but back at work Donovan corners him in the bathroom and a hand job in the stall ensues. Craig agrees to go home with him and finds all the toys at Donovan's disconcerting as Donovan is a Dom and he wants Craig as his sub. Craig sneaks out when Donovan's on the phone and the next day they have it out about what Craig and Donovan both want in a relationship.

I mentioned that I think I need to take a Kim Dare break. There is nothing inherently wrong with the story, it's typical of the author's work, which is the problem. The whole "frozen in place and unable to move even in a situation like the public bathroom at your work where you could be fired if caught" frustrates the hell out of me. How old are you? 12? Grow a freaking backbone. Being a sub doesn't mean freezing like a deer in the headlights as soon as a guy looks at you. Then on the way out of the office he figures he "owes" Donovan because he got an orgasm and Donovan didn't. Oh please. I literally made a scoffing sound out loud while reading. So I don't think there is anything wrong with the conventions this author tends to use, but I've just come across them too often and I've lost interest and sympathy for the characters because they are all the same. And the smug Dom also annoys me, and Donovan was oh so smug. So I think I just need a break and maybe when I go back to the author's work it will be fresh for me again. 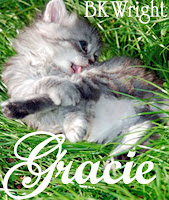 Chris bought this one for me. Why? Because somehow Khris decided I should be the one to read this and review. Why? Because it's told from the kitten's POV, which Chris hates so I volunteered to take one for the team. Aren't I a good friend?

Gracie is a kitten who was rescued by Cameron and Drew. She basically talks about her Daddies and how much they love her and goes through her morning routine with you as she wakes them up and gets cuddles and attention. She tells you a bit about Drew and Cameron, their personalities and how they met. That day they are being interviewed by a newspaper who's doing a story on gay dating. Gracie hangs out with them napping (she naps a lot) while the interview is going on. Okay, Gracie's voice is typically kittenish and self-centered when she's talking. She's a baby, she thinks she's the centre of the universe, probably as it should be for a kitten. However because she naps a lot she doesn't tell the whole story, after the reporter leaves there is a sex scene but she's not in the room. However the tone of the story doesn't change all that dramatically. It's still told as if a third person is observing the action and while on a scale of 1-5 Gracie's voice is a 5, the narrator when Gracie's out cold is a 4. So it still sounds like Gracie a bit which is freaky when describing a sex scene. Like as if your kid was watching you. There wasn't really much story, just how they met and how perfect they are and how happy they are and how adorable Gracie is. So I didn't hate when Gracie spoke but I would have loved to see a more distinct change when she wasn't speaking to make it clear "cat done, human takes over".

I'm not sure who the Beau to Beau publisher is. It was set up weirdly with the picture, immediately followed by the blurb, followed by the address and copyright and the word "Book Content:". Each separated by one line. At the end there is just the author's name. No bio. So I'm not sure if they are self-published, but it was very "basic" and certainly didn't follow the standard e-book conventions (which are similar to paper books). Oh and value for $? No so much. Chris splurged $1.50 for this, that's .25 per page. Put that into perspective, Sindustry II was $7 or .02 per page. Hmmmmm.

Drew is a former pool shark who gets a call from his estranged family. His gambling addict brother got himself $250K in debt and as usual they call on Drew to fix it. But they guy he owes doesn't want money, he wants Drew. He threatens to call in the debt, bankrupting Drew's parents if Drew won't play in a pool tournament for him to get revenge against another player. Drew reluctantly agrees but on the condition his brother goes to rehab. When his brother checks out and threatens suicide Drew's father beats him and nearly breaks his arm. He finally admits that his family will never love him (kicked him out when he came out) and he says his brother has to fix it, he's done. Meanwhile he's started a bit of a relationship with the blackmailer Evan but Evan is too fixated on revenge so Drew leaves to go back to Phoenix. While it seems like a set-up for a blackmail story, it's really a relationship story about enabling an addict and taking advantage of someone who so desperately wants the love and acceptance of his family and who finally has to admit to himself it's never going to happen. Drew's Aunt (his Mom's sister) who raised him after he was kicked out was great, she was a good Mom and funny too. So I really enjoyed this one.
Posted by Tam at 6:19 AM

Ah, now I see what you were saying about KD. I hadn't actually noticed that, though. But I have had it happen with different authors - taking a break from the author usually does help, you're right.

LOL about Gracie - thanks for being a good sport. ;) That publisher puts out books every few days, actually... and I think it's pretty much a self-publishing venture, from what I've seen.

I think certain things will start to grate on one person and never trigger a reaction in another. Like I said, nothing wrong with the tropes used, but I just need to stay away for a bit.

Ah. The only place I've seen those Beau to Beau books is at ARe but I'd never bought one. I think the blurbs didn't appeal and now that I know you get 6 pages for $1.50 I'd be a bit cautious. You can get 25 page Sips for that price. Still more expensive per page but a quarter is pretty steep.

Actually, I take that back - there's at least one other author. I see all the new releases mentioned at the GLBT Promo Blog.

I have the third book on my TBR pile.

I've only read one Kim Dare book and I enjoyed it, but it didn't make me want to rush out and buy all her other books. She's really popular though, isn't she? And prolific.

Interesting mix of stories. I just read Kim's story and it was nice but you're right, it's beginning to seem like the same thing over and over.

A book in the kitten's POV? Definitely different. :)

I've got Pool Hall in my TBR. Sounds good.

I think you'll enjoy the third one Jen.

Yes, Kim Dare is fairly prolific and has a lot of fans and as I said, there's nothing inherently wrong with the story at all, but she uses a formula which is part of her popularity (no wondering what you'll get) and I think I'm just burned out on it right now.

Gracey was "unique" Lily. I know Chris read another book that had a whole bunch of POVs including a cat. I'll say fortunately it's not very common.

Ooh, I had high hopes for the kitten story! LOL! That is really expensive when you think about it, so I doubt I'll give in to curiosity and buy it.

Pool Hall Green is on my ereader. I may get to it later today. I have to go in to work and continue packing those darn boxes. UGH!

I understand taking breaks with authors. I'm on a JD Robb break right now. Plus, there are some authors whose work I read immediately when it is released. There are others that I have to spread out. I like Dare's stories, but I usually space them pretty far apart.

Taking a break is a good thing sometimes. Nothing like fresh eyes when you come back to it. Hope you enjoy Pool Hall.

Great reviews, Tam! I'm not much for smug doms and the kitten thing sounds way too weird for me, but I might check out the pool hall one. :)

The kitten is an experience. LOL The pool one would probably be the best choice.

I've noticed the "Beau to Beau" name cropping up lately. Never looked into it, though, so can't say anything enlightening.

Probably not your thing KZ. :-) The only place I've seen it as ARe. *shrug* Mostly short stories I think, none have really grabbed my attention.

Granted Resistance is Futile when it comes to Khris, but we can't be blamed for you being a lemming, Tam. Just sayin'.

I'm TRYING to be a good and loyal friend. But I think I may have reached my limit.

You captured exactly why Dare is a hit and miss for me - But something does keep me going back for more...

I have a few of her work that I am storing for later in the year..

I have Bell on my list as well but I am trying to get some of the books off my huge TBR list..

I don't dislike the Kim Dare books but I think I need a break. As you said, later in the year perhaps when I am ready for another dose.

Good luck with the TBR. The Bell book was really very good.