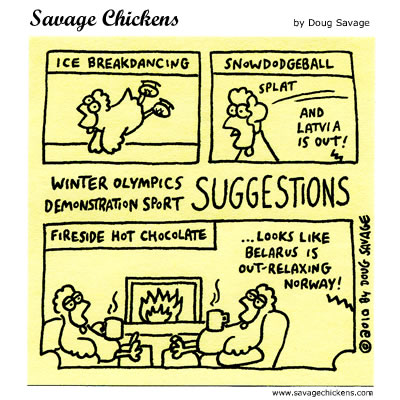 I would sooooo win the gold in the last sport. I can out relax anyone I'm sure. Our figure skater got the bronze last night. I was happy for her able to pull that off with her mother dying suddenly a few days ago. Talk about focus. I imagine now that it's over she will crash emotionally. The gold medalist from Korea? Meh. Sure she was great but it was almost so perfect it was boring. She's only 19, where else does she have to go, she's peaked and it's all a big ball of blah to me.

We got the gold in women's hockey. Ho hum. I know that's kind of unpatriotic but seriously, there are only two teams who even have a chance, that's not the Olympics. We are guaranteed another couple of medals as our curlers are both in the finals so silver at least and there is a bunch of short track speed skating tonight so maybe we'll pull something out of our hats. I can't believe it's almost over. Sigh. I'm kind of looking forward to getting back to a normal routine though. We were up until after midnight to watch the skating and we didn't even stay up for the medals. I had to practically use a crane to get my daughter out of bed this morning. Got some reading done though.

This is set in the future where the existence of vampires and werewolves is common knowledge. In the US, however they must be registered and are treated as lesser citizens. They live in ghettos and have low paying jobs. I love when Canada is mentioned in a story and this one goes: "Our neighbors to the north behind the billion dollar wall built to keep the Canucks and all their free range freaks out of the star spangled land." HAHAHA, isn't that what some Americans already wish you had? There are also two types of paranormals, those who are born that way and those who are made. The "borns" feel they are superior and would love to kill all the mades and vice-versa, so not only are they all discriminated against by humans but they are at war amongst themselves. The mades however have stronger senses, weres can shift at will whereas naturals shift during a full moon.
Okay, now that I've set it up, Bern is a made-vamp who works at the front desk of the police station taking reports about stolen bikes and the like. Kerry is a cop/werewolf but Bern knows he's unregistered. Bern and Kerry start having a little fling when suddenly the spot testers are there checking for unregistered supes. They figure out they are after Kerry and it's the full moon so he's going to change and has no control. The police are looking for him and Bern freaks and they head for Canada. They are separated and Bern turns to Kerry's family for help. They manage to rescue them both, although his mother would rather slit her wrists than help Bern, Kerry forces the issue. He doesn't want to be in a war against the others, he's tired of the fighting and just wants to be with Bern and have lots of sex. Hey, don't we all. I'm not sure if this going to be part of a series or not. It says at the end it's an "expanded" story so maybe it was in a shorter version somewhere. This seemed like a lot of world-building which I had to explain and it would be interesting to see how Bern and Kerry deal with shunning Kerry's family, dealing with the internal war, finding a place to live as supernaturals, etc. It was a decent read but with a lot of information packed into 75 or so pages.

Baby, It's Cold Outside by Nicole Kimberling (64 pages)

This is the follow-up to Primal Red but you really don't have to have read it first. There are a few little things that you might understand if you did, but you can read it fine without. Reporter Peter agrees to go snow-camping with his live-in artist lover Nick. He is sooo not an outdoorsy guy. But he's doing fine when they find one of the other campers murdered. They all end up at a lodge New Year's eve as they await a way to contact the police and it's a bit like a Miss Marple mystery (whom Nick accuses Peter of being). Peter just can't let it rest and you have the two friends of the murder victim (young men), the sister of a young woman who died in an avalanche due to the drunkenness of the victim and her husband, Nick's cousin, a painter left paint on the dead man's jacket. Who done it? Also, Peter finally tells Nick that he has a job interview in Texas for a more high profile job and Nick doesn't want to leave his life in Washington. So you have the murder mystery plus the two guys trying to figure out their relationship. The whole story takes place over two days and there is a fair amount of humour at times and Nick and Peter are total guys who NEVER talk about feelings and don't want to. Nick gets pissed off at Peter for his nosiness and Peter gets self-righteous over his career so it seems more "normal" for a long-term couple. The smexin' is hot, even in a quinzhee. I enjoyed the little mystery that as I said, reminded me of Miss Marple but with more sex.

Ty works at Walmart and everyday this huge biker guy comes at lunch and buys a 64 pack of crayons, some slim jims and crackerjacks. Ty is intrigued but his female friend/coworker Lucky thinks he's creepy and a pedophile. Ty is covering for Lucky one weekend and he gets to talking with Jonah and they have lunch. Ty refuses to ride on his motorcycle and after they have some raunchy sex he finally admits why. He was in an accident that killed his partner and they had been raising his young daughter. When he awoke from the coma the daughter had been returned to her mother and he had no rights. Eventually he finds out that the crayons are for Jonah's daughter whom he sees everyday at lunch at her school as he only gets her one weekend/month. Ty has to decide whether he's willing to take a second chance, especially with someone with another child. I liked Ty and Jonah okay, although their relationship is a bit porny at first (I mean not so romantic - more sex driven) but I HATED Ty's friend. She just kept insisting that because Jonah was a biker who liked kids that he was a pedophile and she kept being obnoxious until he had to save her ass from her abusive boyfriend then she liked him. Grrr. Anyway, it was an okay read.
Thank you for listening. Back to your regularly scheduled life. Have a great weekend all.
Posted by Tam at 12:01 PM

My goodness, what is poor sidebar boy wearing? PETA is going to get him...

Hey! I don't feel like that about Canada. In fact, I want you to adopt me. Pretty please?

I've contemplated the Nicole Kimberling books - guess I'll have to pick 'em up next FW sale.

I think I'll pass on that last one, because the annoyances you mention are sure to drive me batshit about the book. :)

I guess I should change it to SOME Americans, not many. I know many would welcome us freaks. :-)

If the last book was amazing, I suppose you could get past the rest but ... meh. I do like Nicole Kimberlings style. I find her sense of humour kind of understated. Peter has these rambling headlines that go through is head. I thought this one was funny.

"Peter Fontaine, winner of the Investigative Reporter's and Editor's Award, died Saturday after being suffocated inside an artistic igloo. Fontaine's lover, prominent Bellingham painter Nick Olson, escaped the igloo with only a mild chill. Fontaine's blue, frozen body will be on display at the Freezing Man Snow Sculpture Festival until the North Cascades experience a significant summer snowmelt."

LOL about that headline!

That outfit is about the weirdest I've ever seen. Although the body its' on is pretty hot.

Haven't read any of these books. Will definitely pass on the last one and probably the first as well. Nicole's sounds good though.

I've got no problems with my Canadian peeps! :)

Fur skirts are all the rage in Europe I guess. LOL

You guys in Florida HAVE to like us Canadians, we keep the economy humming down there every winter. LOL

Fur skirts are all the rage in Europe I guess. LOL

Thanks for the laughs! You always have a way of saying things! So funny :)
Although it doesn't sell these books/stories this time *g*

So how come you haven't reported on this big news from the Olympic Village, Tam?! LOL!

Glad to hear fur skirts seems to be a passing fad. ;-)

I really like Nicole Kimberling's stuff, the other two will appeal to some and not to others.

LOL It's that cold winter weather Chris. You have to get some friction going to keep warm. ;-)

Except... the cherry trees are blooming in Vancouver, so how cold can it really be?!

Okay, I might consider buying the Nicole Kimberling book then, maybe in the next FW sale like Chris.

LOL re the condoms :D

Shhhhh. LOL Okay, it's a stress reliever then. And those guys are definitely under stress.

I totally understand your rant about that last book. It sounds like it had a great premise, but not enough depth. I think I'll pass on it.

PERFECT summary Eyre. I just felt like there was more missing (and too many freaking promos).

Athletes have to exercise those muscles, ALL of them. ;-)

You'd think those young bucks and buckettes would've thought ahead and brought their own condoms. Sheesh.

Wow, Tam, eX Publishing is really eXercising some bad PR. I'd be royally pissed off if a long short story came with 29 pages of irrelevant pimpage.

I've been wanting forever to be adopted by a Brit or Canadian. But it seems crazy old American broads aren't much in demand. :-(

(That was a pout, but Blogger broke it up.)

eXcellent point KZ. Hmmm. I could run with this X thing. If they had been 17 m/m books I might have been intrigued enough to read through them but not even the same sub-genre just seems lazy and poorly thought out.

We do have plenty of drug stores in Vancouver that are open 24/7. I know athletes don't make much money (in the more obscure sports) but you'd think they could afford condoms.

I'd adopt you guys but then I'd have to marry you or something to prove I love ya and I've BTDT thanks.

I really like the concept of the first book - the outline sounds like my kind of read...

I have the second one - might pull it forward a bit...

I did like the idea of there being two kinds of paranormals Janna and then the rivalry between the two species. A slightly different twist.